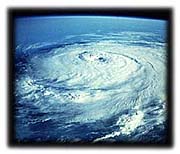 In the creationist view, the atmosphere was fully functioning by the third day, when plants appeared; on the fifth day, birds flew and fish swam the seas (Genesis 1:11, 20). Thus there is no biblical evidence for a slowly evolving atmosphere.

In the naturalistic view, however, the Earth's atmosphere is required to have changed drastically over time. Air on the early Earth is assumed to have come from volcanic gases and from meteorite bombardment.

Scientists have no general agreement on which of these gases might have dominated the early atmosphere, and, in fact, engage in considerable debate over the early existence of methane and ammonia.

This supposed early atmosphere is called reducing; it would have supplied electrons to substances and chemically reduced them to other forms. This reducing process often separates molecules into smaller components. Thus, the early atmosphere would actually have broken down any building blocks of life that were present.

Other speculations on the forming of today's atmosphere are also highly questionable, such as these:

Clearly this speculation is closely connected with the assumed evolution of life. However, geochemical evidence for the assumed early atmosphere theory has added unnecessary complications to our understanding of the Earth's atmosphere.

Some “old Earth” creationists have attempted to find divine direction in the evolution of the Earth's atmosphere. They emphasize that blue-green algae came along at just the opportune time, making oxygen in preparation for higher forms of life. They also suggest that early, heavy carbon dioxide concentrations dwindled just in time to avoid runaway greenhouse warming on Earth. Thus God directed a slowly changing atmosphere for our eventual benefit. This reasoning is certainly interesting, but these cautions are advised:

The idea of a slow, providential alteration of Earth's air in preparation for life might sound appealing to some, at first. However, accommodation to long-age, evolutionary views eventually leads to deeper problems theological and scientific.

The refreshing alternative is that the Earth's atmosphere was created with maturity, complete with the oxygen that our first parents, Adam and Eve, needed.