Is Jesus Christ's character consistent with his high claims?

A very relevant detail that cannot be ignored is what Jesus says about himself. The fact is His self-claims are staggering! If the Bible is correct, Jesus looms above and stands apart from every other figure in history. No one else with an ounce of sanity ever made the lofty claims he did. 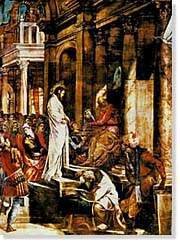 Jesus before Pilate by Tintoretto

In summary, the claim of the New Testament is that Jesus is God, the Eternal Son, who became a human being in the fullness of time (Galatians 4:4, Philippians 2:5-ll).

Was Jesus a Liar? Or Deceived?

What is to be done with such astonishing claims? It is clear that the implications of these assertions are too enormous to just brush to the side. In fact, the choices open to us are surprisingly few. C.S. Lewis, a former agnostic intellectual who became a believer, has set forth the three basic options with crystal clarity:

"I am trying to prevent anyone saying the really foolish thing that people often say about Him, 'I'm ready to accept Jesus as a great moral teacher, but I don't accept His claim to be God.' That is the sort of thing we must not say. A man who was merely a man and said the sort of things Jesus said would not be a great moral teacher. He would either be a lunatic—on a level with the man who says he is a poached egg—or He would be the devil of hell. You must make a choice. Either this man was, and is, the Son of God; or else a madman or something worse."[1]

Although deception, either in the form of self-delusion or as a fraudulent parade before His followers, is a theoretical possibility, it is significant that very few skeptics have ever taken this line of attack. The reason is that the available evidence about Jesus points in the opposite direction.

Jesus Christ's teaching, for example, reveals an astonishing depth, and His moral principles showed an abhorrence of all forms of dishonesty. Indeed, the almost unanimous opinion regarding Jesus of Nazareth is that he was a person of extraordinary character. His appeal has reached across every social class and culture. And His is a character that has lifted up countless followers to a new plane of life. There is not a hint in the New Testament that Jesus was a less-than-level person. Rather, he exemplified strength and virtue. As Jewish scholar, Joseph Klausner acknowledged,

"Christ taught the purest and sublimest system of ethics…one which throws the moral precepts and maxims of the wisest men in history far into the shade.[2]

Nor is this portrait merely the product of imaginative fervor run wild. Real holiness is impossible for either individuals or for communities to invent.[3] Attempts at such an enterprise typically result in a perverse portrait where certain qualities are exaggerated to an extreme, while other essential features are omitted. Genuine holiness is finally recognizable only after an encounter with the surprising person of Jesus of Nazareth. His life actually demolished all stereotypes of that term.

I invite you to do your own reading of the Gospels just in case you have been relying on faulty and second-hand information about Jesus. Many people are surprised to discover that the Jesus we actually meet in the Gospels bears no resemblance to the “meek-and-mild” caricatures that they had previously held about him. H.G. Wells, for example, though himself a staunch opponent of Christianity, admitted about Jesus that he was a “soaring personality” who was "too great for His disciples."[4] And literary critic and playwright Dorothy Sayers paints the following portrait of him:

“It is we [in our generation] who have pared the claws of the lion of Judah… He was emphatically not a dull man in His human life-time. It has been left to later generations to muffle up that shattering personality… The people who hanged Christ never, to do them justice, accused Him of being a bore—on the contrary, they thought Him too dynamic to be safe.” [5]

Copyright © 1998, All Rights Reserved—except as noted on attached “Usage and Copyright” page that grants ChristianAnswers.Net users generous rights for putting this page to work in their homes, personal witnessing, churches and schools.