Is the universe expanding? 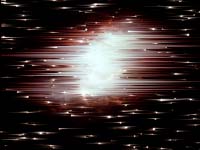 Measurements indicate that the universe is continually expanding, or spreading out. Current belief is that space itself is enlarging, carrying along the galaxies that are embedded within space. The most distant galaxies and quasars seems to have departing speeds that are close to the speed of light. The evidence is based on the redshift of light. If a light source such as a galaxy is moving away from the Earth, there will be a shift toward the longer wavelength end of the spectrum, that is, in the direction of red-colored light. This shift is noticed for nearly all of the galaxies beyond those in the vicinity of the Milky Way. Such galaxies don't actually turn red, but their spectra reveal the shift of their wavelength toward longer wavelengths.

The redshift of starlight is often taken as evidence for the big bang theory. Yesterday the universe was a bit smaller than it is today, and it was smaller yet a year ago. By this backward extrapolation, the universe is hypothetically contracted to a single point of explosion some 10 to 15 billion years ago. It must be noted that extrapolation can be a dangerous practice in science, for two particular reasons in this case.

First, a guess must be made concerning rates of change in the past. When God placed the stars in the sky, there was instant expansion! Therefore, present rates of change should not be used to try to interpret the distant past.

Second, extrapolation may not be taken beyond the actual beginning point. If the universe is 10,000 years old, that must be the limit of extrapolation. Expansion of the universe is just one possible explanation for the redshift of starlight. If this theory is correct, God surely has his own purposes for creating a universe in outward motion. Perhaps it provides stability: In a static universe, gravity would cause all galaxies to eventually collapse inward.