Does life begin only when the fetus “looks human”?

Some argue that the unborn becomes fully human at the time at which it begins to take on the appearance of a child. Professor Ernest Van Den Haag[1] is sympathetic to this criterion, though he combines it with the criterion of sentience which I will deal with later.

He writes that when the unborn acquires a functioning brain and neural system soon after the first trimester (though brain waves can be detected at 40 to 42 days after conception, which Van Den Haag does not mention), it “starts to resemble an embryonic human being.” After this point, “abortion seems justifiable only by the gravest of reasons, such as the danger to the mother; for what is being aborted undeniably resembles a human being to an uncomfortable degree.” [2]

There are several problems with this argument. 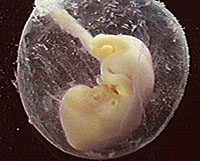 First, though appearance can be helpful in determining what is or is not fully human, it is not a sufficient or a necessary condition for doing so. After all, mannequins in stores resemble humans and they are not even remotely human. On the other hand, some human oddities—such as the elephant man or the bearded lady, who some might think more closely resemble nonhuman primates—are nonetheless fully human. The reason why we believe that the bearded lady and the elephant man are fully human and the mannequin is not is because the former are functioning individual organisms that genetically belong to the species Homo sapiens. The latter is an inanimate object.

Second, Davis points out that…

"this objection assumes that personhood presupposes a postnatal form. A little reflection, however, will show that the concept of a ‘human form’ is a dynamic and not a static one. Each of us, during normal growth and development, exhibits a long succession of different outward forms."

An early embryo, though not looking like a newborn, does look exactly like a human ought to look at this stage of his or her development.

Thus, to insist that “the appearance of an 80-year-old adult differs greatly from that of a newborn child, and yet we speak without hesitation of both as persons. In both cases, we have learned to recognize the physical appearances associated with those development stages as normal expressions of human personhood.” [3]

It may be true that it is psychologically easier to kill something that does not resemble the human beings we see in everyday life, but it does not follow from this that the being in question is any less human or that the executioner is any more humane.

Once we recognize that human development is a process that does not cease at the time of birth, then…

…to insist that the unborn at six weeks look like the newborn infant is no more reasonable than to expect the newborn to look like a teenager. If we acknowledge as ‘human’ a succession of outward forms after birth, there is no reason not to extend that courtesy to the unborn, since human life is a continuum from conception to natural death.[4]

Hence, Van Den Haag, by confusing appearance with reality, may have inadvertently created a new prejudice, “natalism.” And, like other prejudices such as sexism and racism, natalism emphasizes nonessential differences (“they have a different appearance”) in order to support a favored group (“the already born”).