Does life begin only at birth? 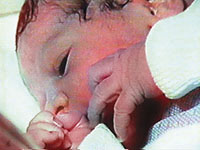 Some people argue that birth is the time the human entity becomes fully human. They usually hold this position for two reasons: (1) our society calculates the beginning of one's existence from one's day of birth, and (2) it is only after birth that a child is named, baptized, and accepted into a family.

Why the baby is clearly human before birth

First, that our society counts one's beginning from one's birthday and that people name and baptize children after their births are simply social conventions. One is not less human if one is abandoned, unnamed, and not baptized. Some cultures, such as the Chinese, count one's beginning from the moment of conception. Does that mean that the American unborn are not fully human while the Chinese unborn are?

Second, there is no essential difference between an unborn entity and a newborn baby, just a difference in location. As Wennberg writes…

Surely personhood and the right to life is not a matter of location. It should be what you are, not where you are that determines whether you have a right to life.[1]

The pro-life groups are right about one thing: the location of the baby inside or outside the womb cannot make such a crucial moral difference. We cannot coherently hold that it is all right to kill a fetus a week before birth, but as soon as the baby is born everything must be done to keep it alive.[2]

Third, as Wennberg points out, a newborn chimpanzee can be treated like a human newborn (i.e., named, baptized, accepted into a family), but this does not mean that it is fully human.[3]