Isn't abortion justified for population control and to ease the financial and emotional burden a child may put on a family? 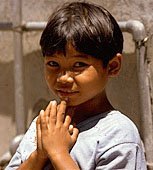 Some pro-choice advocates make much of both the use of abortion as a means of population control and the financial and emotional burden a child may put on a family. It is argued that in such situations abortion is justified. Along the same lines, a number of pro-choice advocates argue that if abortion is forbidden, then the poor will keep producing more children to draw more welfare. Hence, in addition to pity, there is an economic incentive invoked in this appeal.

Beyond pointing out that the so-called “population explosion” is an economic and not a people problem,[1] there are fundamental moral problems with this argument.

This is not to say that the human race may not reach a time in its history at which overpopulation becomes a problem so severe that it must significantly curtail its birthrate. At such a time it would be wise to try to persuade people either to willingly use contraceptive devices or to practice sexual discipline. If such a tactic does not work, then forced sterilization may be a viable—albeit desperate—option, since it does not entail the death of the unborn. In any event, if the unborn are fully human, abortion is not a solution to population problems even in the most dire of circumstances. Hence, the real question is whether or not the unborn are fully human.

Underlying this type of pro-choice argument is a fundamental confusion between the concept of “finding a solution” and the concept of “eliminating a problem.” For example, one can eliminate the problem of poverty by executing all poor people, but this would not really solve the problem, since it would directly conflict with a basic moral truth that human beings should not be gratuitously exterminated for the sake of easing economic tension. This “solution” would undermine the very moral sentiments that ground our compassion for poor people—namely, that they are humans of great worth and should be treated with dignity regardless of their predicament.

Similarly, one can eliminate the problem of having a headache by cutting off one's head, but this is certainly not a real solution. Therefore, the argument of the pro-choice advocate is superfluous unless he or she can first show that the unborn are not fully human and hence do not deserve to be the recipients of our basic moral sentiments.

In an age where we doubt the justice of capital punishment even for very dangerous criminals, killing a fetus who has not done any harm, to avoid a future problem it may pose, seems totally unjust. There are indeed many social problems that could be erased simply by destroying those persons who constitute or cause them, but that is a solution repugnant to the values of society itself. In short, then, if the fetus is a human being, the appeal to its being unwanted justifies no abortions.[2]

This is not to minimize the fact that there are tragic circumstances with which our society is all too familiar, such as the poor woman with four small children who has become pregnant by her alcoholic husband. But once again we must ask whether or not the unborn entity is fully human, for hardship does not justify homicide. In such cases, those in the religious and charitable communities should help lend financial and emotional support to the family. And it may be wise—if it is a case of extreme hardship—for the woman to put her baby up for adoption, so that she may give to others the gift of parenthood.