for crude humor including sexual innuendo, and for language and some violence

Sherry grabs her son Trent and runs to her southern grandmother’s house when she learns her dangerous ex-boyfriend has broken out of jail. What she doesn’t know when she gets there, is that FBI agent Malcolm (Malcolm Lawrence) is impersonating grandma as part of a plan to catch the escaped convict. Sherry (Nia Long) is also under suspicion because money her ex stole from a bank never turned up, and the FBI thinks she might be hiding it. However, Malcolm takes a liking to her, and begins to believe she’s innocent. 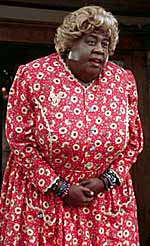 While the movie is a mix of a crime caper and light romance, it is also a comedy. Unfortunately, there’s not much to laugh at. It takes a lot of suspension of belief to think that Malcolm’s impersonation of Big Momma is able to fool her friends. The gags are at the expense of senior citizens and the overweight. Martin Lawrence is a funny comedian, but the script doesn’t give him a chance to show how good he can be. The jokes are extremely predictable.

Tichina Arnold, who was a regular on Lawrence’s TV series, is good in one of the movie’s few amusing scenes. Terrance Howard (“The Best Man”) plays a great bad guy, but his screen time is too short.

The profanity isn’t very heavy, but there is a scene where an offensive word is uttered during a church service. There are sexual innuendos, an implied sex scene, and a couple of shots featuring partially nude characters. The violence consists of some gun play, and a few fights, but no blood. A fight where senior citizens gang up on a self-defense instructor is played for laughs. There is a good message about the importance of family ties here, but it’s almost buried by the silly plot.

This movie was full of vulgar words and sexual jokes (it was much fouler than “Bluestreak”). The three letter “A” word was used constantly throughout the movie. The story was pretty good, but the content of jokes, language and situations were horrible. I can say there were some pretty funny parts, and since I’m a teenager they can seem even funnier, but as CHRISTIANS we should avoid stupid movies like this. My Ratings: [2/2]