for some language and sensuality

Although a good combination of actors can create great chemistry onscreen, it doesn’t necessarily have to be an act. “Bounce” proves that fact, as on again/off again, real-life couple Ben Affleck and Gwyneth Paltrow star in a film best described as a sweeter and less offensive version of 1999’s “Random Hearts,” blended with a little “Return to Me.” 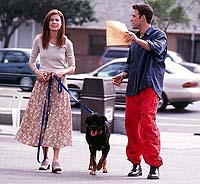 “Bounce” begins with Buddy Amaral (Ben Affleck) clinching a big deal, with one of the perks being free airline tickets. While waiting at O’Hare for his flight home, which is delayed, he strikes up friendly conversation with several other stranded airline passengers. Buddy, Mimi Praeger (Natasha Henstridge), and Greg Janello (Tony Goldwyn) pass the time talking about their lives. Greg is a writer from Los Angeles and family man who just wants to get home for a special Christmas tradition with his oldest son, Buddy is a successful advertising executive (also from L.A.) who is attracted to Mimi, and Mimi is a beautiful businesswoman from Dallas who it seems, just wants to share her airline hotel voucher with someone.

When Buddy’s flight is finally able to board, he feels sorry that Greg was bumped to a later flight and therefore, will not make it home in time to be with his family, so he gives Greg his free ticket and convinces the airline employee to let him on. He then takes Mimi up on her offer to share a voucher.

The next morning Buddy is horrified to find out that the plane has crashed, killing everyone onboard. Realizing that he should have died instead of Greg causes Buddy to become so consumed with guilt that he turns to alcohol to escape the pain. After embarrassing himself by being drunk at a company awards ceremony, he checks into rehab. There he learns of the 12-Step recovery process. He has some difficulty with the program at first because he states that he doesn’t believe in God. After completing the program, however, he’s shown following one of the steps… the one that instructs you to make amends with anyone you’ve wronged. Since he believes he wronged Abby Janello (Gwyneth Paltrow) by inadvertently causing her husband’s death, he decides to check up on her to see how she and her two young sons, Scott and Joey (Alex D. Linz and David Dorfman), are doing.

It’s been a year since the plane crash and Buddy finds Abby struggling as a realtor. He pretends he’s looking for business property and gives her a lead of another building that his firm is looking into, hoping to give her the opportunity to make the deal. During the negotiation sessions they develop an attraction to one another. When she closes the deal, she takes him to a Dodgers game as a thank-you for his helping her. They continue seeing one another, their attraction turns into love, and Buddy develops a close relationship with Abby’s two boys. Unfortunately, they also end up sleeping together.

Abby talks about her husband occasionally which causes Buddy further pain in dealing with his issues. Throughout all this he never reveals that he knew her husband, nor his connection to the plane crash. Not only is he keeping those details from her, she’s keeping something from him as well. He tries to tell her on several occasions, but just can’t bring himself to do it. She eventually learns of his secret through a chance meeting, and she’s furious that he didn’t tell her and confused about how to deal with everything emotionally.

Objectionable material include the two implied sexual encounters: the first showing a couple in bed the morning after; and the second, a kissing scene, with some clothing removal, and the couple eventually kissing in bed. A man is shown urinating (from the back, therefore nothing is seen). Violence is limited to a dog attack ending in ripped clothing, but no injuries, and Abby’s boys have a brotherly scuffle. Several characters are shown drinking and/or smoking. In addition, the theme of alcoholism is present (one person becomes an alcoholic and another claims to be a recovering alcoholic).

Buddy’s new assistant, Seth (Johnny Galecki), reveals that he’s gay, but he doesn’t display the stereotypically effeminate behavior. Instead, he’s a likable, supportive guy who isn’t afraid to be direct with Buddy about his alcoholism and later, his relationship with Abby.

Offensive language consists of one use of the f-word, about a dozen common swear words, nearly two dozen misuses of “God” or “Jesus,” and several other instances of colorful language.

Bottom line: “Bounce” is just your average romantic drama with good writing and acting. The only thing remarkable about it is the real-life romance factor beneath the surface. “Bounce” is a mildly entertaining movie if you can tolerate the problematic material listed above.

I thoroughly enjoyed this lighthearted, fun movie. It was a “what you see is what you get” kind of movie… not deep, or thought provoking, but just cute. I found it to be quite refreshing. I recall an implied sex scene, but they had the decency to fade out rather than being graphic. It could have been left out, but this is Hollywood. Unfortunately, to find anything cleaner than this one would be pretty tough these days! I hadn’t seen Gwyneth Paltrow since “Shakespeare in Love” and was happy to see her do something clean! My Ratings: [Better than Average / 3½]

Ann, age 35
This movie was refreshing. It is a definitely 20 something crowd drawer! There were slow times, but the good parts made up for it. The language was mild. As for sex scenes? I would like to know where? Have you ever seen your parents kiss? When all is said and done the movie is great! My Ratings: [Better than Average / 3½]

Gina, age 25
This movie was VERY good! It was a “chic flick” but it was worth it! I really liked this movie. There were some unneccessary premarital sex scenes, but nothing awful, no nudity or graphic details. This was a really good movie and I would recommend it for anyone who likes simple love stories. My Ratings: [Better than Average / 5]

KLJ, age 14
I absolutely love this movie!! It’s not very often that you can find movies that are “safe.” There were two scenes of unnecessary premarital sex, but they were only implied, nothing graphic and no nudity. I went into to this film somewhat skeptical, as to if Ben Affleck was some kind of a psycho or stalker, but although the plot is far fetched, it was very easy to let your emotions run wild. Yes, it may seem to have a “chic flic” theme, but my husband saw and loved it! Go see it the language isn’t bad, and it wouldn’t be bad for the younger girls either… My Ratings: [3½/5]

Erica Payne, age 22
My mom, aunt, two cousins and myself went to see this movie. None of us really knew what to expect, but all left glad that we had seen it. I thought the acting was excellent, Ben Afflect really shows his emotions in this movie. It is not his typical action or jerky role. I really felt for the characters in this movie, for them to comeback from such a tragedy in their lives, it gives hope to the families of those lost in accidents! Unfortunetly there was a totally un-called for sex scene, it wasn’t graphic, but it was more than I cared to see, and one implied sex scene (shows after, in bed)! Overall, I’d say this was a great film for teens and adults. It is what I call a chick flick, so leave your man at home and bring a girlfriend! My Ratings: [3½/3½]

J., age 19
The movie Bounce was a very heartful movie. The viewer was really able to find a character to sympathize or empathize with. There was one point at which there was too much sensuality. That was they only down part of the movie. The language wasn’t terribly bad and it had a great plot. My Ratings: [3/4]

Todd McCarthy, Variety
…plays like a needless variation of ‘Random Hearts’ for the under-30 crowd…