for strong violence, pervasive language and a scene of sexuality 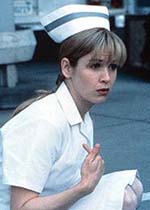 Renee Zelwegger (“Jerry Maguire”) innocently and convincingly plays the role of Betty Sizemore, a Kansas diner waitress who constantly obsesses about her favorite television soap “A Reason to Love”.

When she witnesses the violent scalping and shooting of her womanizing, abusive husband she takes a mental dive into a role as Nurse Betty, concocted from “A Reason to Love”. And so she starts out on a cross-country trek to find her way into the life of her favorite soap opera doctor, Dr. Ravell (Greg Kinnear). Predictably, once she actually has the chance to meet the handsome doctor she is eventually transformed back to reality, finally realizing that the man of her dreams is actually more of a nightmare.

Betty is pursued across the country by her husband’s killers, played by Chris Rock (whose use of profanity is completely over the top), and Morgan Freeman (who begins to fantasize what a life with Nurse Betty would be like and how he might redeem himself to be as good a person as she is). When he finally gets to meet Betty, he turns soft and lets her know that she doesn’t need a man—she’s had herself all along; she just needs to believe in herself.

“Nurse Betty”, while often receiving rave reviews and promising an interesting plot, is unfortunately littered with obscenities, including many uses of the “f” word, and it has one very sexually explicit scene. Two graphically violent scenes in the film with blood and gore make this comedy far less than amusing.

Although the moral of the story is well received (reality is much more sobering than your dream life, but more fulfilling), the things that make this movie offensive far outweigh the few redeeming qualities it has. “Nurse Betty” needs more than a little urgent care.

I liked the movie even though Renee’s character gave the impression of not much between the ears. She was cute and likable in her roll, I thought. My wife (and I) thought too much profanity was used by Chris Rock. He certainly can do better than having to get laughs with his &%$()*. And Morgan Freeman is always a winner. It is a good movie to see, but be aware of the language. Don’t not see it because of that though… just expect it from Chris Rock… he must have thought he was on HBO. My Ratings: [3/4]

Curtis Mann, age 65
I am committed to getting my own reviews before blindly going to movies again. The obsenities and violence in this movie were horrendous. Getting together with a few college friends, we entered the theater at the last minute on the recommendation of a local newspaper review. I couldn’t even follow the story line because I stayed crouched down in my seat with my ears and eyes covered (if you can imagine that) most of the time. I think I’ll stick to PG ratings and definitely, definitely, read the reviews first—FOR MYSELF! My Ratings: [1/1]

JD, age 42
A terrible movie. I was prepared for a comedy. What I got was a disturbing, graphic murder right off the bat. I expected much better with such a renowned actor as Morgan Freeman. A total disregard for human life displayed by the characters of Chris Rock and Morgan Freeman throughout the movie. I smiled at a couple of the jokes later in the movie, but never laughed. Don’t waste your money on this bomb.

Tonya Gould, age 38
One of the worst movies I’ve ever seen. I wanted to walk out on it, but my wife wanted to stay and watch the whole movie just to see how they could possibly end such a terrible movie. Hollywood must be drying up to come up with something such as this. My recomendation for this movie; turn and run away. My Ratings: [1/1]

Eddie Lopez, age 33
Renee Zellwigger is charming as the deluded soap opera fan who escapes from a traumatic event in her life by believing that her favorite soap star is her fiancee who is waiting for her. And Morgan Freeman is also his usual appealing persona. But the content of this movie, the convoluted layers of darkness, make this a really objectionable movie for Christian church goers. My Ratings: [1/4]

Halyna Barannik, age 54
“Nurse Betty” is hilarious! Unlike many comedies these days, “Nurse Betty” relies on its amusing situation for much of the comedy, and then adds funny lines. One example is when Charlie [Morgan Freeman] and Wesley [Chris Rock] are driving across the country, and Charlie wants to go to the Grand Canyon. Wes says, “No! No way. Ain’t no way we’re going to the BLAND Canyon!”—Next scene—Charlie standing, peering out at the Grand Canyon. Things like that. The acting is fantastic. Morgan Freeman especially. I will be very surprised if he doesn’t get nominated for an Oscar for this film. He is funny and serious and is a real joy to watch. There is some violence in the movie, but not a lot. The language is the biggest thing. While Renée Zellweger doesn’t swear once, Freeman and Rock do on a regular basis. But they are hitmen for Pete’s sake. I wasn’t very offended by the movie and in my opinion, it’s one of the best films of the year, no question. I recommend this movie to everyone who wants to laugh, think a bit, and see some great acting. My Ratings: [2/5]

Jason Eaken, age 17
“Nurse Betty” is a dark-comedy about a young woman named Betty Sizemore (Renee Zellwegger) who is a waitress at a local diner in Kansas, but never misses her favorite soap opera “A Reason to Love” with her favorite soap star David Luvell (Greg Kinnear) whom she has a crush on. Her husband Del is a car salesman and a real sleeze who is cheating on her with his secretary while Betty is at working nearby. When she calls him at work she asks which car she can borrow off the lot to drive home. He tells her specifically to take the blue Lasaber, but instead she decides to take the red one. While Betty is in the back bedroom watching a tape of the soap she loves her husband is in the other room talking to a pair of drug dealers played by Morgan Freeman and Chris Rock. When the deal goes bad because Del lost the drugs he was supposed to deliver Freeman and Rock decide to torture him to get him to talk and end up brutally scalping him and then shooting him dead. Meanwhile Betty see’s her husband from the back bedroom bloody and struggling for life and ends up slipping into a fantasy world of the soap opera and subconsciously blocks out the brutal murder. She starts to think the soap she watched on TV is real and travels across the country to California to go meet David Luvell, the soap stud whom she now thinks is her fiancee. I would not recommend this movie. It is definitely a dark-comedy with gory scenes, pervasive language, and a scene showing a couple having sex. I really thought the plot was good, but was ruined by the unnecessary violence and language. I do think the acting was top notch and Renee Zellwegger did a wonderful job depicting her character. My Ratings: [1/3]

Preview Family Movie and TV Review
…several violent and bloody deaths and injuries, one of which involves a graphic scalping…

ScreenIt!
…in need of just a little first aid…