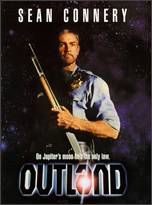 This film was recommended to me, but it was several years before I got around to seeing it. When I finally did, it was a disappointment.

In the interplanetary future, a mining colony on Jupiter’s moon Io has been exceeding production quotas and earning bonus checks. But it’s possible that this has been accomplished by letting the miners abuse a synthetic amphetamine that pushes their endurance but eventually makes some of them go psycho. The new marshall, O'Neil (Sean Connery), is asked to look the other way at certain indiscretions; but he chooses to do his job instead.

This is a pretty much standard plot piece with one-dimensional characters. it’s just another cop movie or Western, except that it happens to be set in outer space. Connery is good as the honest cop, but there’s no opportunity for him to show character depth as he does in “The Untouchables”. The only really noticeable secondary character is Frances Sternhagen as the colony physician, Dr. Lazarus.

Content Warnings: Violence consists of several killings and some drug-induced suicides. There’s nudity: one scene of a drug-crazed man threatening to knife a prostitute, and some bar scenes in which the stage entertainment is couples performing live simulated sex. Profanity is strong in spots.

Technical: The quality is uneven. Although the gravity is one-sixth that of Earth, we generally see full gravity (of course). In one scene, a man who’s suspended in a jail cell (apparently in zero-gravity) bleeds upwards (negative gravity?). A blood sample that’s withdrawn from one of the drug casualties doesn’t look like blood at all. The opening title cards even have some misspelled words.

Conclusion: Skip this one.