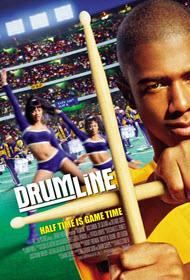 “Half time is game time”

This film is set in the world of show-style marching bands. “Drumline” is a fish-out-of-water comedy about a talented street drummer from Harlem who is recruited to a Southern university. Once enrolled, he expects to lead its marching band’s drumline to victory. He flounders in his new world before realizing that it takes a more than talent to reach the top.

Positive
Positive—My husband and I took our nine year old daughter and thought that the movie was very entertaining, humors and tender. I would highly recommend this movie to all families. The young man in the movie started out thinking that he was “the” best and no one could match him and though that might’ve been true he needed an attitude adjustment. As he learned more about himself, his skills and his true purpose he grew into a powerful performer. I believed he learned that no man is an island and that we all need help from one another to help them grow but mostly important to help us grow. “Drumline” get two thumbs UP!
My Ratings: [Better than Average / 4½]

LeShaun, age 33
Positive—Great drama/comedy. Kept me on the edge of my seat.
My Ratings: [Good / 4]

Charles Craver, age 30
Positive—I thought this movie was great. There’s no blatant sexuality, the lone bit of violence is a punch to the jaw, and the guy who was a jerk sees the errors of his ways after he is humbled a bit. If you’re rhythmless, you won’t like the drumming sequences, but the passion that these people have is nothing short of awe-inspiring. If more Christians actually had that kind of passion for Christ, the entire world would turn to Christianity.
My Ratings: [Better than Average / 4]

Paul, age 27
Neutral
Neutral—In a word, “Been there, done that.” The storyline has been done a lot in the past, many times and much better. It treads no new ground, just rehashes old movie themes and colorizes them. The only character who seemed to have any integrity is Dr. Lee whose part was played extremely well. The story was very predictable. There were no twists in the plot, no sub-plots, nothing to occupy the film but one relentless drum scene after another after another. If you were ever in a marching band, see this film. If you weren’t, wait til this is at your $.99 rental store and pick it up there.
My Ratings: [Average / 1½]

Ron Reames, age 56
Neutral—Alcohol/ Drugs: I once heard the word ‘cognac’ in a song, and some nightclubbing scenes may involve a drink or two.

Blasphemy: Apart from one character being called GG (God’s Gift), no misuses of the names of God or Jesus.

Occult: Minor – a red-uniformed opposing band includes female dancers dressed as ‘demons’ with tails, horns and tridents. These are only visible in the distance.

Bad language: Moderately Heavy—a** (8), sh*t (8), plus h*ll and d*mn a few times each. ‘Bang it’ also occurred several times, with definite sexual connotations. Also, one “You are cr*p at…”

Crudity: Heavy – Frequent references to sexiness and particularly the ways the word a** is used.

Sex/ Nudity: Judging women by appearance only. Lots of close-fitting, curve-emphasising clothes, especially on the dancers who accompany bands. Sexual comments. Sensual dancing. A man teaches another man to “bang” and “love” the drum as though it’s sex, and asks when the trainee last had sex.

Violence: Minor – one punch in the heat of competition leads to an all-in brawl.

There are far too many sexual references in this story. It would be quite unsuitable for children and teens. Nevertheless, I could enjoy “Drumline” because of its strong moral lessons and the admirable talent and discipline of all who are involved, especially the marching band members and dancers. I had no idea that pursuit was so demanding. It was truly enthralling—a very interesting and musically fun movie that left me feeling mostly good. The reason for that though was to do with God-given talents and abilities and wisdom as portrayed, not so much to do with the movie dialogue. Only see it if the triggers mentioned above don’t particularly tempt you.

Moral Rating: Average (mainly due to sex references, sensual dancing and language) or Better Than Average (because although there’s plenty of disrespect, characters are later thoroughly corrected about most of their bad behaviour, speech or attitudes).
My Ratings: Moral rating: Average / Moviemaking quality: 4

R. E., age 32 (Australia)
Comments from young people
Positive—As I entered upon the theater awaiting the opening credits of “Drumline,” I did not quite know what to expect. The trailer was pretty nice and it was a spark that caught the flame of my attention. When I left the theater however, my expectations blew away. This movie is definitely for all who love bands, those who watch them, and for those who do not know little or anything about them (me, for example).

I never imagined that the intensity of the movie and the thrill of it being so kind hearted could enthrall me so much. The band sequences, are I believe, the best directed ever. I recommend this to those who are 12 and up. There are some scenes where playing a drum is compared to having sex, and there is a small amount of profanity, but the morally upright storylines overshadows all of this in a number of ways. Remember, it is band movie so you might see some skimpy majorettes and a little bit of vulgar dancing. Believe me though, after you have watched through to the final scenes, you will be glad you stayed.
My Ratings: [Better than Average / 5]

Ray, age 17
Positive—The script could of used some work to flesh out the characters and even some of the secondary characters like his father whom he never reconciles with. That’s the only thing that really bothered me about this film. Other than that I thoroughly enjoyed it. Go have a fun “peppy” night and out and catch this inspiring flick! There were some highly suggestive scenes so you might wanna keep the 12 and unders home. :) (The dancers and comparing a drum twice to having sex).
My Ratings: [Better than Average / 4]

Chris, age 18
Positive—Drumline was an awesome movie!!! As part of one of the top high school marching bands in Colorado, I thought that this movie did a wonderful job showing what we do, and how much work goes into a show—the teamwork, the grueling training, the constant practice. From a Christian perspective, there is very little objectionable content in this film.

There is some mild profanity, but that is probably pretty accurate in a film about teenagers with an urban background. There is some sexual innuendo (“playing a drum is like making love”), but Devon and Layla (the main characters) do nothing more than kiss—pretty good for a PG-13 movie! There are positive lessons in this story, like teamwork, sportsmanship, the pursuit of higher education, honesty, and friendship. I’d recommend this film for anyone over the age of 10, especially if you are (or have been) a band geek!
My Ratings: [Better than Average / 4]

Emily, age 14
Positive—Drum Line was a great movie to see for all ages. Only there are a few curse words. Other than that there was nothing offensive in this movie. Nick Cannon rocks in acting and may I say is very HOTT! Lol.
My Ratings: [Good / 5]