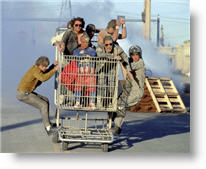 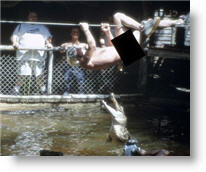 Imagine a room full of immature junior high boys during a sleep over, add a heavy dose of curse words, gross out gags, plenty of male nudity, and self inflicting pain. Now you have all the information you need to know about Jackass: the Movie. Unfortunately, that room full of junior high boys are the ones this movie is targeting.

MTV has once again outdone themselves in this sad commentary on our degenerating culture. “Jackass” is the reality TV show that has become an instant hit among teenage boys. The movie is an 84 minute extension of the television show, but with scenes they could not show on TV (even MTV, which says a lot). The characters take a video camera around with them and do things to themselves and others that would make a juvenile delinquent proud. The stunts they perform range everywhere from speeding down a paved road in a shopping cart while bricks and rocks are shot from a canon at them, renting a used car and demolishing it in a crash derby, getting beat up by a professional female kick boxer, tightrope walking over a crocodile pit, to shooting fireworks from their rear ends, on screen vomiting, urinating in a snowcone and eating it, defecating in a plumbing store’s displayed toilet, giving each other paper cuts in between fingers and toes, a very disturbing scene where one of the characters proceeds to insert a toy matchbox car into his rear end for an x-ray examination, and much more. Need I mention the pervasive cursing and male nudity (both frontal and rear) that is rampant throughout the movie?

We know Romans 1 says that men will trade their natural desires for unnatural. These stunts are deliberately meant to be unnatural, shocking, repulsive, and offensive. Unfortunately, behind the laughter in the movie, there is no doubt that the guys who perform these stunts have hurting hearts as they seek attention in their five minutes of fame. Unfortunately, in seeking their own fame, they are bringing down a generation to their level of degrading shame. And whether we like to hear it or not, there will be many young boys who will likewise try to seek attention in the same ways.

My advice: keep your teens far from this movie and encourage them to find their satisfaction and fulfillment in Jesus, not in the ever-passing, emptiness of this world… which is all over this movie.

See our review of the sequel to this movie: Jackass: Number Two

Negative—I thought this movie was pretty offensive. It was mostly crude humor with nudity and a few laughable parts. Even the guys I was with didn’t want to watch some parts! This is not exactly a movie worth spending your time or money on—trust me.
My Ratings: [Extremely Offensive / 1½]

Michelle, age 18
Positive—I thought the movie was great, it was sooooo funny, and I would recommend it to anyone. Cmon, you cannot tell me that watching a bunch of people do stupid stunts isn’t the greatest thing in the world.
My Ratings: [5]

JackAss Fan, age 18
Positive—It was an atonement. Unbelievably funny. The next best thing really! Check it out for a 1 ½ [hours] of laughs…
My Ratings: [5]

John Moore, age 29
Neutral—The target audience of Jackass: the movie is young (or young at heart) adults. This is not a movie for children. Jackass: the movie is a wilder version of the MTV show Jackass, which consists of a series of pranks and stunts performed by a wild crew of young men, all in the pursuit of shock and laughter. Bottom line: if you enjoy ridiculous, sometimes crude practical jokes, then you will laugh at Jackass: the movie. If not, don’t see it.
My Ratings: [Average / 3½]

Brian, age 18
Positive—…a funny movie. You have to walk into a movie like this knowing that you’re not going to get a good Christian movie going experience. If you want to laugh at stupid people doing stupid things, you will not be disappointed.
My Ratings: [Extremely Offensive / 5]

Paul Abella, age 27
Comments from young people
Neutral—Of course jackass is going to be crude, disgusting and offensive… they’re not trying to be wholesome, you know…. anyone who is brazen enough to go into the movie and expect to be edified in any way has mental problems. You go to a movie like this to laugh at stupid boyish humour, something that most boys are consistently told to surpress. Not everyone who goes to see if wants to be like them, they’re just fun to laugh at… [these] things that ARE funny, like it or not.
My Ratings: [Extremely Offensive / 5]

Jackass fan #1, age 17
Negative—This movie was HORRIBLE! My friend and I went thinking that it was just going to be a funny/stupid movie… but the nudity (front and back of a guy), language… it was all just bad. Don’t waste your time or money to see this… it was so offensive to me!
My Ratings: [Extremely Offensive / 1]

Jesse Carter, age 16
Positive—I thought the movie was great! There was less profanity than I thought there would be. This movie is not for the faint of hearts, though. They do risk their lives for a giggle. But I do recommend it if you liked the TV show.
My Ratings: [Very Offensive / 4½]