for action violence and scary images. 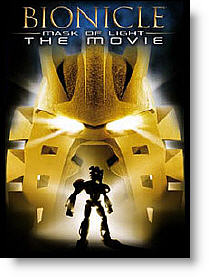 Here’s what the distributor says about their film: “For the first time ever, the world of BIONICLET comes to life in an epic motion picture event—BIONICLET: MASK OF LIGHT! Experience the action-packed adventure that has enthralled millions of fans. Discover the latest chapter in this legendary story in an all-new CGI animated movie. It’s nonstop action as Jaller and his best friend Takua set off on their journey to find the 7th Toa, a mysterious guardian who will help protect their island home. With the guidance of the Mask of Light and the united strengths of the other six Toa, the brave companions must overcome the powerful Makuta and his menacing Rahkshi. They must prevail or the island of Mata Nui will be doomed to an eternity of darkness!

…A young hero and his brave companions must overcome powerful forces and dangerous obstacles in their struggle to save their world and fulfill ancient prophecies. An epic thrill ride filled with good and evil, darkness and light, heroes and villains, BIONICLE: MASK OF LIGHT features action-packed adventure and brings the exciting Bionicle characters to life for the first time in an all-new, full-length CGI animated movie.”

The Web site for this film introduces the movie with these words: “In the Beginning: In the time before time, the Great Spirit descended from the heavens, carrying we, the ones called the Matoran, to this paradise. We were separate and without purpose, so the Great Spirit illuminated us with the three virtues: Unity, Duty, Destiny.” The movie premiered on DVD and videocassette, September 16, 2003.

Negative—Presents a masculine, Greek/Roman/primitive/pagan worldview where darkness and light come together to enable the finale of the story. Distinctions between good and evil are therefore blurred (not appropriate for the age-range it is aimed at, let alone adults). This spiritual ambiguity is made more confusing (it was for my seven-year old) by portrayal of commendable things such as team-work and friendship and self-sacrifice. Generally I would say it is not good for Christian children because of the “seems Christian but isn’t” worldview it puts forward. My son was spiritually troubled and fascinated at the same time, not a good place to put your children.
My Ratings: [Somewhat Offensive / 3]

Roy Hollands, age 36
Positive—I watched this movie with my 13 year old and 6 year old sons. I was very impressed with the animation as well as the story line. It held all our interests (for different reasons) and there was nothing offensive. In fact, I found a number of biblical references throughout the movie. I’m actually looking forward to viewing the movie for a 2nd time!
My Ratings: [Good/4]

Jennifer G., age 40
Comments from young people
Positive—This was a good first try for Bionicle. It did have some things that surprised me, such as Gali meditating, referring to the Toa as “spirits,” and Jaller coming back to life. Overall it stayed very close to the story line, as did Bionicle 2: Legends of Metru Nui. It was a very clean film, there was no cussing, or sexual references. The animation was not the best (it gets better in Bionicle 2), and there were some out-of-character moments, but overall it gets a thumbs up from me.
My Ratings: [Average/3]

Rebecca, age 14
Neutral—A great story moral about sacrifice, but with magic and ancient powers, Parents should watch with their children.
My Ratings: [Average/4]

Eric M., age 10
Neutral—I watched this with my little brother. There is nothing special about it. My little brother liked it, but what six year old wouldn’t? Kids will like it, but it is not worth paying twenty bucks at Target. Stick with renting it.
My Ratings: [Good/3]

Marie, age 14
Neutral1 bad word, not that noticeable. This is an awesome movie, everything (almost) from the series to life. Positive. Great. There are quite abit of Christian values in here.
My Ratings: [Better than Average / 5]

Garrett, age 11
Positive—Wow, this movie is amazingly good. The only thing is Makuta. This movie may be scary for young viewers (look at the PG rating descriptor), but overall clean. Makuta is a demonic creature! Avoid this if your kids are toddlers or kindergarteners.
My Ratings: [Better than Average/5]

Benjamin Layman, age 11
Positive—This was a great movie! I am a major Bionicle fan, along with my little brothers and sisters. This movie had some events matching those in the Bible, (the part where Taka Nuva tells the matoran to gather the villagers and wait for his return matches the biblical event of Jesus telling his followers to gather and wait for his return), and the action was stupendous! I can’t believe some other people said it was too Peganish! Overall, this movie is so excellent, that you should definitely watch it! Also be aware of the second and third ones, which are so much better than the 1st one. Trust me, I have both the 1st and 2nd ones!
My Ratings: [Excellent!/5]

Saberfang, age 14
Positive—I thought it was a step in the right direction for Hollywood. I caught no profanities or sexual innuendoes, and the animation was nothing short of spectacular. Some moments of the film were a bit frightening for small children, and the violence got pretty intense in some scenes, making this more of a movie for teens than adults. There is much talk of spirits, but much of this can be seen in a Christian perspective. I would recommend that you rent this movie before you buy it.
My Ratings: [Better than Average/4]

Matt Triponey, age 12
Positive—This movie has little (if any) swearing in it. It also has nothing to do with sex or nudity, considering the characters are all biomechanical creatures. Being biomechanical, the violence (which may be scary for younger children) of the battles have no blood or gore. The only thing that might be objectionable is the conclusion of the movie, but I personally believe that light and darkness does not necessarily represent good and evil. Even Satan can disguise himself as an angel of light (2 Cor. 11:14). In the end, good always triumphs over evil. This movie does have biblical elements in it, and I enjoyed viewing it.
My Ratings: [Better than Average/4]

Abe, age 15
Positive—This was a great film. Good for people of all ages and gives out a very good message! I see some people did not like how the movie ended and how dark mixed with the light and all. Well, you would have to look into the story line (which goes much deeper than the movie shows) to understand that last part. The movie showed how Jala and Takua have a duty to mata-nui, just as we have our duty to Christ. The beginning was very much like the Bible in how they lived in a peace on the island until evil entered. Kind of like “The Fall.” Yes, the parts with makuta were kind of scary but satan would be also, and makuta and satan are kind of alike. I give the movie a 10/10 and would recommend it to anyone.
My Ratings: [Excellent!/5]

Ronny, age 16
Movie Critics
…There’s a whole lot of mythical mumbo-jumbo going on here, most of it reminiscent of Asian mythology as set forth in Japanese and Hong Kong films…