for crude and sex-related humor, language and drug references 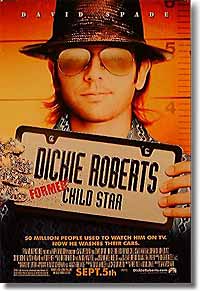 Here’s what the distributor says about their film: “50 million people used to watch him on TV. Now he washes their cars. TV child star of the ’70s, Dickie Roberts is now 35 and parking cars. Craving to regain the spotlight, he auditions for a role of a “normal” guy, but the director quickly sees he is anything but normal. Desperate to win the part, Dickie hires a family to help him “replay” his childhood and assume the identity of an average, everyday kid. Several folk who are also involved in Dickie’s special world include: Sidney, Dickie’s longtime friend and agent; Cyndi, his on-again, off-again girlfriend; Peggy, Dickie’s real mother; George, Dickie’s adopted father figure; and Grace, his adopted mother figure.”

This film is a sort of E! True Hollywood Story of Dickie Roberts (David Spade, Finch of the TV series “Just Shoot Me”) a former childhood star of the Glimmer Gang whose catch phrase is “nucking futs.” The cast of childhood stars is a list of “who’s who.” You’re sure to find a favorite among them and some you forgot about.

I wouldn’t recommend this film to adolescent teens or under. It sends poor messages; although in the end, Dickie does get it. Parents, if you decide to see this flick with your children, you’ll be sprinting alongside them trying to undo what ever took root—while explaining the dysfunction of it all. The movie has many expletives, crude behavior, and words of blasphemy. Some of the following stand out among the rest. There is a short but nonetheless disturbing scene of a homosexual man who claims to eat a Twinkie with one bite, and completes the mission. Dickie encourages children in a secret way to curse and when getting the prize from a cereal box pulls out his own “prize”—his middle finger. The phrase Dickie repeated, “I’ll nail this like Jesus the carpenter” is by far the lowest.

Dickie is desperate to make a comeback and discovers his need to recreate a childhood in order to land the leading role in a Rob Reiner movie. Thus, he sells his autobiography to hire a family and stumbles upon the true journey—finding real love. A love that is encouraging and comforting, with boundaries—every child’s requirements to grow into a “normal” adult. This is something that Dickie certainly lacked—hence, his transformation from the weird angry guy.

Throughout Dickie’s quest, you’ll hear derogatory statements from those who should speak quite the opposite. The only promising relationship is that of his agent played by Jon Lovitz. In fact, he’s willing to do anything to give Dickie the opportunity to get an audition, even agreeing to give one of his kidneys as payment.

As Dickie gets in touch with his inner child, that has never developed properly, he finds a world unexplored with bicycles, lullabies from a mother, and helping his younger sister win a contest. These experiences are paramount to a “grown up” Dickie landing the role of his dreams. We all have a desire to bridge the gap between our meaningful moments of youth, those that touch the deepest part of us, and our accomplishments of adulthood. We try our best to be recognized with our contributions of gifts and talents, needing to be loved. Perhaps that’s a desire we’ll never outgrow.

One scene includes a moving memory of a Candyland board game on a Christmas morning that will leave some grabbing for a tissue—this movie’s glimmer of hope for the hopeless. Yet, we must remember, holding on to an event or thing to be happy is a false sense of contentment. Don’t miss out on the real thing! Let your valuable childhood memories of pure love speak louder than any disappointment or contrary circumstance. Dickie did!

In the end, Dickie passes up his dream and realizes what he wants isn’t necessarily what he needs. In his pursuit of real love, he discovers it was closer than he could have imagined.

In the discovery of love, people often misconstrue what they feel, for “real” love. They mistake the thrill of materialism or landing the perfect acting role with happiness, which is fleeting in the scope of eternity. There is only One that can fill that void!

David Spade is a crafty actor—he’s believable. Many will root for him throughout this tale. But that doesn’t negate the offensive scenes, including the closing credits with a remake of “We Are The World” with changed lyrics of vulgarity.

Neutral
Neutral—Kids will love this, because the humor is very childish, nothing too objectionable (a few swears, but nothing they don’t hear everyday at school), but the movie isn’t very entertaining unless you’re 8 years old. The one bright spot is the very end, I don’t want to spoil the surprise, but stick around for the credits.
My Ratings: [Better than Average/2]

Kat, age 18
Negative
Negative—Well, I should have stayed with the previews they have airing on television. They were the whole movie in it self. The hilarious clips for the trailers are really the funny parts unless you care for offensive comedy. Its purposeful story line was drowned out with the crude and sexual humor that seemed to appear right when it was going somewhere. Right when you felt comfortable with the main character you were then suddenly blushing and wishing you would have seen it without your child. Its attempt to entertain with humor while gathering the crowd to cheer for the under dog left me wanting more by the end of the movie. I understood its view of wanting the main character to get “reprogrammed” and understand the meaning of life. I just wish it would have been done with a little less offensive language and gestures. I would strongly recommend parents viewing this before allowing your child to see this movie.
My Ratings: [Average / 3]

MeloMel, age 35
Negative—Don’t even waste your time. I thought cause there were lots of kids in it and cause it had to do with families that it would be pretty decent. I was wrong. Right from the beginning I did not have a good feeling about what I was getting myself into. I am pretty picky when it comes to movies but this one was just a blah movie. It had swearing (one of the main “funny” lines was a profanity said backwards) and there were crude talk and lots of other things to make this movie not a keeper. Don’t waste your time with this!
My Ratings: [Very Offensive / 2]

Andrea, age 19
Comments from young people
Neutral—This movie had a lot of funny parts but, unfortunately, they were mostly offensive. My mom wouldn’t let me see “School of Rock” because of drug references, but she let me and my little sisters see this which was worse.
My Ratings: [Very Offensive/3]

Jack, age 14
Negative—This movie was extremely funny; but also pretty offensive. The main character Dickie Roberts, played by David Spade, teaches the kids in the family he hired to cuss by adding an extra letter so they couldn’t get in trouble. At an audition for the pep squad a young girl dances very immorally and sings a very objectional song. I laughed, but there were lots of things that could have been taken out of this film.
My Ratings: [Average/2]

Mariette O., age 14
Positive—This movie was hilarious. Granted, not everybody will think that, but if you liked Joe Dirt, or any of the Spade/Farley collaborations, you will like this. It is a heart warming story with a good positive message that love and family are the most important things in life. Yeah, its weighed down by the expected sexual jokes and rude humor. I guess its a toss up, take the bad in with the good. In my opinion, David Spade’s signature physical comedy and the positive end message are worth seeing this movie for. Go see it if you are over 15.
My Ratings: [Average / 4]

Jesse Carter, age 17
Positive—I thought this movie was hilarious. David Spade is great and amazingly he plays in a fairly clean movie that is still funny. there is language and a some mild sexual humor. the worst of the language is at the end credits were they sing a song if you have little ones watching I suggest you turn it off at this point (your not missing anything just a couple f-words and the a-word repeatedly) it is pretty funny though. I would recommend this movie to anyone ten or older that is in the mood for a good laugh and a feel good ending.
My Ratings: [Average/4]

Jordan, age 12
Positive—I liked this movie a lot just like other Adam Sandler productions.David Spade was a great actor in this film.I recommend this movie.
My Ratings: [Better than Average/5]

Warren, age 12
Movie Critics
…exults in a whole host of seedy things sure to make a strong, negative impact on children everywhere…

Steven Isaac, Plugged In!, Focus on the Family
…Although most of the foul language in this movie is light, it is too prevalent and unnecessary. That, and the other objectionable elements listed in our CONTENT section above, push DICKIE ROBERTS into non-family territory.

--Michael Elliott, Movie Parables
…one of the worst movies the little comedian David Spade has ever made. And if he doesn’t watch it, it may end up being a prophetic epitaph to his career…

-Holly McClure, CrossWalk
…Not a horrid film, it’s strictly ordinary and joins the ranks of the soon to be forgotten…