for violence, brief language and nudity 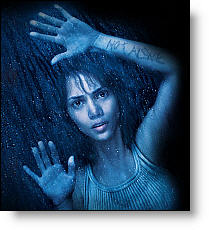 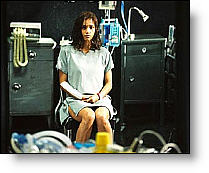 GOD’S EXISTENCE—If I can’t see God, how can I know he really exists? Answer

Movies echo other movies. And so, several times while viewing “Gothika” my mind pondered other, greater, films. The human mind searches for something to hold onto and at times my brain considered other films with confused main characters: “Gaslight”, “Identity”, “The Sixth Sense”, “The Shining”. And, of course, mysteries are better if one is never quite sure what is going on. And they’re even better if the main character is desperately clueless. Dr. Miranda Grey (Halle Berry) has awakened behind a cell in her own psychiatric ward. Even worse, her beloved husband, Doug, has been murdered. And wouldn’t you know, she cannot, for the life of her, remember what happened? Caring for her is Dr. Pete Graham (Robert Downey Jr.) who has a crush on her, but who doesn’t believe anything she tells him because, well, she is considered crazy. And, as Chloe (Penélope Cruz) another patient in the institution has ominously said, “It is hard to trust someone who thinks you’re crazy.”

Chloe is right. It is hard to speak past someone else’s projection of you. If someone thinks you’re nuts, everything that falls out of your mouth will be suspect. When Miranda starts speaking about ghosts, it’s hard for anyone to believe her. The audience sees the ghostly spectre, but that doesn’t help matters either. The ghosts could be drug-induced, guilt-induced, born from psychosis, or plain old supernatural. Miranda must then solve the mystery alone, come what may.

Halle Berry does a fine job of being the helpless “possible” murderer. Robert Downey Jr. does his usual good performance. And Penélope Cruz actually seems like a good actress. But, although the director has pulled out all the stops and created a movie where almost anything is possible, something is missing. The trouble with “Gothika” is that for all the tension and the eerie horrific settings, there really is no tension. (Do psychiatric hospitals for the insane still look like they were designed by vengeful mad scientists? Does it never stop raining?) Oh sure, some odd things are happening and a ghost seems to be out to get her, and sure there is talk about Miranda’s upcoming court date, but the tension just isn’t there. The audience is too inside Miranda’s puzzled mind. And a puzzle might create interest but it doesn’t necessarily build tension.

The film deals with the old paranormal issue of ghosts and the supernatural. It also touches on rationality and belief. Miranda is a scientist who trusts only the rational. Unlike Shakespeare’s Hamlet who had to decide if he was dealing with a deceiving ghost from hell, his own madness, or a true spirit, Miranda doesn’t have God or Satan to worry about. The supernatural and evil exist, of course. But spiritual goodness is not in the picture. Miranda is on her own and all evil is human evil. Ghosts, if they exist, are angry victims.

Throughout the film Miranda learns to be intuitive and to go with her irrational conclusions, the nearest thing to acquiring a soul. Christians will definitely raise their eyebrows, because while Miranda moves away from the mere rationalism of science, the place where she ends up is a kind of paranormal New-Agey faith in intuition and signs. There is no God in the film to trust, just a vague human intution and spirits.

There are several scenes which might make a viewer jump, much graphic horror, nakedness, and sexual perversity. The film is not predictable—so many possibilities exist—but it’s not Oscar material either. … It leaves the viewer unsatisfied.

Negative—This was a terrible movie! …a lot of sexual content and blood. There was a corrupt police man, and a unfaithful husband who tortured his patients before raping them. Another part of the movie makes you think that the main character is having an affair with another doctor. What happened to forsaking all others? I think it goes against everything morally right. The movie makes you almost feel sorry for the murdering wife. Women where treated like sexual objects with no brains. Haley Berry was a big disappointment. I definitely would not recommend it. I was ashamed I hadn’t researched it more before I agreed to take my daughter. I left the theater with a sick feeling in my stomach, wondering why we’re letting movie makers poison our minds with this kind of garbage.
My Ratings: [Extremely Offensive/1]

Lisa G., Ohio, age 29
Positive—I was impressed w/ this movie. I don’t really see it as a horror film, because it didn’t really scare me. But it is very intense and kept me guessing through the whole movie. There were a few scenes that were not necessary (i.e. the shower scene) but other than that I think it’s a good film. I stress the “R” rating, I wouldn’t recommend it to anyone younger than 17.
My Ratings: [Average/4]

Chelsea, age 18
Negative—As a Christian, I wouldn’t let my little brothers watch it since there were some parts that are really bloody, and some words that are offensive, especially to women. I was a little bit dismayed. I expected too much from this movie. I thought it was more psychological. But it seemed like another scary movie we see everyday.
My Ratings: [Average/2]

Joanna Marie A. Paulino, age 19
Positive—I thought that this movie was excellent. I watched it at a friend’s house for a scary movie and really enjoyed it. I think that it is no different from what anyone could hear in a high school or out and about. It showed how horrible rape is and how much it messes people up.
My Ratings: [Offensive/4]

Don Patton, Movieguide
…It is a thoroughly synthetic confection, compounded of clichs drawn from a half-dozen genres and subgenres…

A.O. Scott, New York Times
…Constantly bouncing from derivative to ridiculous and back to derivative again…