for language, some sexuality and drug references. 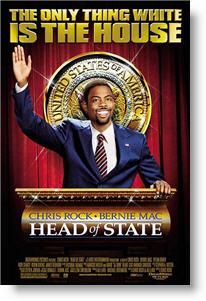 Talk about bad timing. What might have passed for an amusing, if highly improbable, political romp five or ten years ago seems hopelessly ludicrous in these serious days of terrorism and warfare. In his latest comedy, “Head of State”, Chris Rock plays Mays Gilliam, a hardworking alderman from a run-down Washington, D.C. neighborhood whose life has taken a turn for the worse. But just after Mays is dumped by his social-climber girlfriend and about to lose his humble office, the gang at Capitol Hill comes calling. It seems his party’s presidential nominee has been killed in a plane crash a mere seven weeks before the election. Since no serious contenders feel they can win at such a late date, the governmental powers that be decide to run a black man so at least they’ll look like heroes to the minority communities when it’s time for the next election.

This is the closest the film ever comes to reality. Few Americans have trouble believing that certain politicians will intentionally use another person’s minority status to enhance their own image. Indeed, the news supplies daily evidence that these same people try to use our differences to pit us against each other for their own selfish gain. However, it’s a little tough to accept that no experienced, educated, well-spoken African Americans are available to run for the highest office in the land (were Alan Keyes and Condoleezza Rice killed in that plane crash too?).

That said, “Head of State” does include a few genuinely hilarious moments. When Chris Rock is at his best, his humor takes on laser-beam precision, firing on society’s most outrageous but least discussed absurdities. Consider, for example, a scene where he points out that the wealthy woman leaves her children with the nanny, the nanny leaves her children with the babysitter, and the babysitter leaves her kids at the day care—he finishes the rant with “everybody take care of your own dang kids.” Rock (who wrote and directed the film) also satirizes the incredible leaps of logic opposing candidates will feed to the public: A political ad against Mays states that since he did not attend a certain cure for cancer rally, he must be pro-cancer. Unfortunately, “Head of State” produces too few of these diamonds amongst a rather lot of coal.

The script consistently falls back on “Bringing Down the House”’s same tired stereotypes that all white people are not only racist (one shot shows thousands of whites running in terror from their suburbs to vote against the black candidate) but apparently heartless and stupid as well. Considering that these bits are neither fresh nor funny, one can only wonder why Rock chooses to reinforce such divisiveness. And though he’s backed up by a talented cast, he makes little use of them. Bernie Mac, in particular, turns in a fantastic performance as May’s brother, a bail bondsman who leaves his profession to join his sibling on the campaign trail.

As to whether you can let your 12 to 16 year-old son (who is no doubt dying to see the film) spend an evening with Chris Rock, you’re probably going to want to go with a no on this one. Once again, the PG-13 standard gets trampled on. It’s bad enough that profanities (including the f-word) and sexual innuendo are littered throughout, what’s worse, they actually take away from the film’s plausibility.

We all want to believe Mr. Smith, or Mr. Rock as the case may be, could go to Washington and make a go of it, but with so little reality to hang our hats on, “Head of State”’s humor and, by extension, our interest inevitably bottoms out.

Positive
Positive—I agree with the reviewer that Bernie Mac was underused, but then so was Lynn Whitfield as one of Rock’s campaign people. I took my 14 year old niece to see this, and it’s okay for that age and up. Parents should be warned about the bad language, however. While I was glad there were no blatant sex scenes, the tired sexual innuendos added nothing to the film. Decent political humor, but not as searing as Chris Rock usually presents it.
My Ratings: [Average / 3]

Hillari Hunter, age 41
Negative
Negative—This movie had a lot of unnecessary language and wasn’t all that great. The movie had a couple of laughs, but it’s not a movie you want to let your kids go see. My mom regrets letting me go see this movie and she would never let me watch it again.
My Ratings: [Extremely Offensive / 1]

Cole, age 11
Negative—Awful! Simply awful. My wife and I rarely get out since we have two kids, so we feel we wasted this rare opportunity. The film was very “white-racist” and so contrary to any Biblical principles we believe in. I thought it might be a light comedy based on the one and only funny scene in the movie, which is in the trailer about a company the markets orange colored beer to kids in a baby-bottle, which Rock’s character denounces. Other than that, the movie was simply horrible!
My Ratings: [Very Offensive / 1]