for violence, language and thematic elements 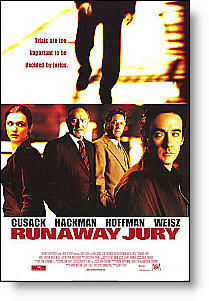 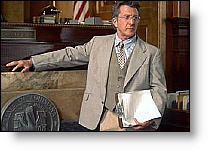 Nicholas Easter (Jon Cusack) and his partner, Marlee (Rachel Weisz) try to manipulate the jury of a civil suit against a gun manufacturer. Gene Hackman plays a jury consultant for the gun company and Dustin Hoffman plays the lawyer for the plaintiff. Each must decide whether or not to accept Marlee’s offer to fix the outcome of the trial in exchange for ten million dollars. WARNING: SOME PLOT SPOILERS IN THIS REVIEW!

A case could be made that John Grisham was the most successful Christian author of fiction in the twentieth-century. Part of his success, however, is no doubt tied to that fact that his fiction (other than The Testament) tends to eschew overtly Christian topics and overtly Christian characters. I was not even aware that Grisham was a professing Baptist Christian until, after reading The Testament, I researched his biography. Given the fact that he writes about his profession more than his professions, is it even relevant in a film or book review to mention that Grisham is a Christian? Is it meaningful to call him a Christian writer? I think it is.

Grisham has made it clear that his faith informs his writing even if it isn’t the subject of his writing. For example, he mentioned in a speech at Baylor University that his stance on the death penalty is based primarily on his answer to the question of whether or not it is consistent with Jesus’s teachings.

“Runaway Jury” is a briskly moving suspense-mystery that will probably win more Christian fans for its lack of sex, nudity, or heavy profanity than it will for its subject matter. Indeed, one of the more curious elements of the film is that it is even more sanctimonious than the novel upon which it is based.

In the book, the lawsuit is against a tobacco company rather than a gun company, and while the change makes the plot a bit more topical it also complicates the our relationship to the protagonists and their motivation. American audiences, not just those of Christian persuasion, like their heroes and villains defined unambiguously, so it seems obvious that the largest reason for the changes is to increase the culpability of the defense in general and of Hackman’s character, Rankin Fitch, in particular.

Witness the scene in which Hoffman’s character confronts Fitch in the bathroom of the courthouse and Fitch blithely declares regarding both the rule of law and the people whose lives have been destroyed by his client: “I don’t give a s***.” It is easier for us to accept the fact that the intended heroes are basically doing everything they are condemning—Fitch’s character for practicing (subverting the jury process, blackmailing those they disagree with, lying under oath)—if we are constantly reminded that their reasons for doing so are defensible while his reasons are self-serving. Easter and Marlee extort fifteen million dollars, but it isn’t for them. He did not persuade the jury to vote the way he wanted, Easter insists (though if he did he would be right to do so, the movie hedges), he merely freed them to vote their hearts by protecting them from Fitch’s unjust and unfair influence.

This self-justification, which the movie accepts as legitimate, is at odds with Easter’s actions in deliberation. He does persuade the jury (though only after he gets a message that the bribe money has been safely transferred) and he does so rather disingenuously, couching what is essentially an emotional appeal in language that insists without evidence, that the law is on his side.

I am not claiming that the gun company would or should win such a case, just that Easter and the film beg the question completely by refusing to present an affirmative argument that the case would or should be won if not for Fitch’s interference. No matter how slimy the film makes Fitch, it can’t hide the fact that Easter’s and Marlee’s argument is an essentially non-Christian (and I would argue un-American) one: the ends justify the means.

Ultimately, however, the makers of the film bank on the fact that the audience will share enough of the frustration of the characters at seeing justice denied or perverted by the rich and powerful, that they will be happy to let Fitch be a scapegoat even if Easter has to sully his conscience to get him, and they may be right.

The film tries to recapture some of the moral high ground for the prosecution by having Hoffman’s character (Wendell Rohr) refuse to buy the verdict even though he believes this principle will cost him and his client dearly. His idealism, however, is presented as misguided and impotent. Rohr wins the case, the film argues, not because his faith in doing right is well founded, but because someone like Easter is willing to do what Rohr’s conscience won’t allow. Vengeance may not be Rohr’s, but it isn’t exactly left for the Lord, either.

This double-mindedness may not keep Christians from enjoying the film as an entertainment piece, but it may prevent the more serious thinkers among them from truly embracing it. Unlike “The Firm”, in which the protagonist finds his salvation by returning to the law that he had previously abandoned, “Runaway Jury” doesn’t even know its protagonist is lost.

My Grade: B+ | Violence: Mild | Profanity: Minor | Sex/Nudity: None

Neutral—Another great John Grisham movie. Killer story line, although the ending was good not great. And ultimately, this ends up being an anti-gun advertisement, which is somewhat offensive. Nonetheless, the acting was great, but watch out for some language. One sexual scene, although no nudity and not gratuitous (cuts away after a few seconds). I would not let children under 13 watch the movie due to the initial scene where a disgruntled ex-employee shoots a stockbroker to death, as well as other mature themes. I also remember Dustin Hoffman using Jesus’ name in vain, which is offensive. The trial and the jury tampering are fascinating, though a extremely far fetched.
My Ratings: [3 ]

Michael Angelovic, age 35
Negative—This film is really nothing but a ad for the anti-gun lobby. I’ve been a juror, and I find this very, very very far fetched. The movie has some suspense and a twist at the end. Overall I’d classify it as a video movie (wait for the video)!!!
My Ratings: [Better than Average/2]

Bob, age 40
Positive—For sheer entertainment, “Runaway Jury” delivers. It is fast paced, suspenseful and well acted. All this without an excess of language, violence or sexuality. This film may be farfetched and it is obviously pro-gun control. But it was great to see a well delivered and interesting movie that could keep you on the edge of your seat for two hours without offending your moral sensibilities. Recommended.
My Ratings: [Average/4]

Todd Adams, age 36
Negative—If you are sensitive to movies with a liberal agenda, you’ll find this movie very distasteful. If you are not sensitive to this, you might find this movie no better than average. As one reviewer previously noted, the movie is on big ad for the anti-gun lobby. It makes the Robin Hood, anti-gun activists the heros, and gun manufacturers the villains. The movie’s theme is based on a crazed day-trader who shoots 9 in his old brokerage house, and how it’s the gun manufacturer’s fault. Nowhere in the movie is the killer mentioned as being culpable in the crime! This was much the same spin we received from the liberal media after the tragic Columbine incident (which the movie had the audacity to draw parallels to). Blame is transferred elsewhere and excuses are given, because the world denies that man is inherently flawed.
What the secular world refused to recognize as the root cause in the Columbine tragedy is the fact that kids are taught that they are merely animals within a long chain of millions of years of death, tooth and claw evolution—why are we then surprised when they behave like animals? (Harris and Kliebold were both strong believers and proselytizers in the theory of evolution—Harris died wearing a shirt that read “natural selection”). As I watched this movie, the verse that kept popping into my head was Isaiah 5:20 “Woe to those who call evil good, and good evil.” Extortionist anti-gun activists and sympathetic liberal lawyers are painted as good, while the 2nd amendment and the Biblical principle allowing us the right to defend ourselves is painted as evil (albeit indirectly).
My Ratings: [Average/2]

Fred Williams, age 42
Positive—…the plot… is suspenseful, but it does have some flaws (perhaps this is because I’ve watched it once). …I believe that its message is very useful to Christians and to people in general. This movie challenges the idea that semi-automatic weapons are acceptable because it shows that semi-automatic weapons are destructive to society (it looked like an Uzi or something). Is the possession of a semi-automatic weapon “Christian”? I don’t think so, and I think that Hoffman’s character displayed the moral stance that all Christians should take. I think its worthwhile to watch, as the plot is engaging, and that it raises important questions for our society and the public policies that we support.
My Ratings: [Better than Average/3]

Eric, age 20
Movie Critics
…it is the anti-gun lobby that runs away with this jury-the one onscreen and the one sitting in theaters. Impassioned arguments are presented both for and against gun control, but there’s no reasonable question about where the filmmakers’ sympathies lie…

Dr. Ted Baehr, Movieguide
…The story acts as if some triumphant victory was established because a gun manufacturer was found guilty of a shooting spree it didn’t commit. Never-mind the fact that the murders were committed by an emotionally and mentally disturbed employee who came into the office with premeditation to vent his anger at his former co-workers…

Holly McClure, Crosswalk
…watchable, barely, because it features some fairly talented actors running down those familiar alleyways to uncover Grisham’s pat ending… The verdict is in, and John Grisham is guilty. Guilty of what? Try illegal dumping of recycled story lines on an unsuspecting public.

Bill Muller, The Arizona Republic
…Denied much in the way of surprise or suspense, we’re left with that inevitable face-off between ol’ pros Hackman and Hoffman… who will upstage the other?…

Glenn Lovell, Mercury News
…the closest cinematic approximation to a beach novel that money and skill can buy…

Ty Burr, Boston Globe
…Forget (but just for a moment) the million and one plot holes, forget the empty cynicism that pervades the piece, forget the assorted, blatant product placements. The one thing I couldn’t wrap my head around while watching Gary Fleder’s impeccably assembled but creatively bankrupt “Runaway Jury” was this: Couldn’t Dustin Hoffman come up with a Southern accent that differed, say, just a tad from the one he used playing Dorothy in “Tootsie”?…

Glenn Whipp, L.A. Daily News
…The movie hums along with a kind of sublime craftsmanship…