for language and sexuality/nudity 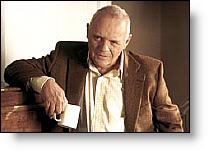 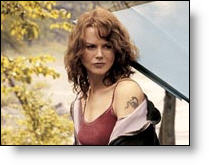 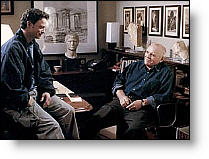 TThe old adage, “If it ain’t broke, don’t fix it,” would have befit the protagonist in “The Human Stain”, who creates a “stain” in his life, while thinking he is ridding it of one. This high-class drama is painted with finesse, colored with adult themes and content, as well as a stroke of redemption.

From Writer/Director Robert Benton (“Places in the Heart”, “Kramer vs. Kramer”) comes a story based on a novel by Philip Roth starring Anthony Hopkins, Nicole Kidman, Gary Sinise and Ed Harris. The story revolves around college professor Coleman Silk (Anthony Hopkins) who quits his position as a professor due to controversy over an unintentional racial slur. The irony of this one incident is revealed later through flashbacks, a love affair with Faunia Farely (Nicole Kidman) and a friendship with writer Nathan Zuckerman (Gary Sinise).

From the start, the film does not guard itself from using any and all kinds of vulgarity. The Lord’s name is also taken in vain. Some scenes involve full nudity, as well as a couple of sex scenes. The film is clearly meant for adults, not only in this regard, but also in the subject matter.

Overall, the film is exceptionally well executed. It is truly a piece actors can sink their teeth into, which all do with expertise. Many scenes are catered to them—to give a pure, unhindered performance. There is also great use of close-ups and consistent symbolism to enhance the storytelling. The dialogue and script flow wonderfully.

John 8:32 says, “and you shall know the truth, and the truth shall make you free.” As with the film “Dead Man Walking”. this film, too, seems to have this idea as one of it’s most important themes. Coleman Silk has lived a lie most of his life and has never confessed a secret he has kept for years. The redemptive aspect of the film seems tragic at first, but the beauty comes in how he deals with it. Sean Penn’s character in “Dead Man Walking” has a similar experience before facing the death penalty.

The moral of the film is much more subtle here, but it can be found. In some ways it is also a tragedy, and teaches us a lesson of where lying can eventually lead. The story is rich with various themes, but the theme of honesty seems to be the most redemptive aspect.