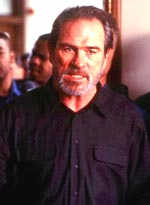 Here’s what the distributor says about their film: Tommy Lee Jones is an FBI deep-woods tracker who captures an assassin (Benicio Del Toro) who makes a sport of killing deer hunters. When the killer escapes in the city, he must team up with with another agent (Connie Nielsen) to hunt down this thrill killer before he starts to hunt them.

Positive
Positive—“The Hunted” is one of the better action/suspense movies I’ve seen in a long time…[It] is very violent with its open war scenes and brutal knifings. But the violence isn’t gratuitous. Some swearing but not an abundance. No sexual content of any kind. My only complaints are that I didn’t quite believe that in the middle of a chase that Jones and Del Toro would stop to make homemade weapons for the final fight. Or that after tumbling down several levels of a stone waterfall that Jones wouldn’t be dead or paralyzed. Other than that I thouroughly enjoyed “The Hunted”.
My Ratings: [Average / 4]

Andrew, age 24
Negative
Negative—Although this movie stars Tommy Lee Jones, I am surprised he was willing to take the role. The acting was high quality, but the movie was beneath an actor of his caliber. I feel the story was lacking in substance, and, where it fell short, it was padded up with unnecessary gore. There is an underlying philosophical moral, but the story was not well written—in fact it seemed to be incomplete—so the moral did not have the impact it would have had otherwise. I recommend not wasting your time.
My Ratings: [Very Offensive / 1]

M.T., age 26
Negative—This film starts out fairly interesting, and sets the viewer’s expectations pretty high, but about halfway through it descends precipitously into the ridiculous. The villain is apparently able to manufacture elaborate traps in the blink of an eye with no tools but his hands. He can melt steel in a small fire made of burning twigs. The hero falls from a great height, hits rock after rock on the way down, yet is unscathed. At the first of these cartoonish events, you roll your eyes. At the second, you chuckle. At the third, you laugh out loud, and all the tension which the film had been trying to build melts. My recommendation: If you’re a fan of one of the actors, rent the DVD, otherwise, see something else.
My Ratings: [Average / 1]

Tim Blaisdell, age 39
Comments from young people
Negative—This was a terrible film! At first, despite the violence, it seemed somewhat interesting. I tried to figure out exactly why this man was hunted, and what made him go insane. Then the movie turned horrendously and intolerably violent. The violence took up so much of the film that without all the gore, there wouldn’t be a film. After that, all of your questions remain unanswered. There is no plot. There is absolutely no story behind this. All there is is people gutting each other with knives. Never see this movie. Trust me.
My Ratings: [Extremely Offensive / 1]