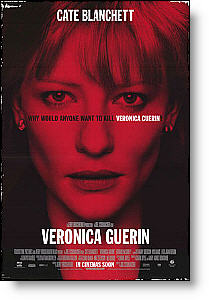 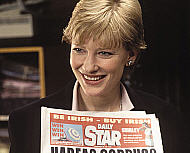 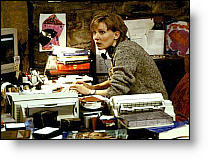 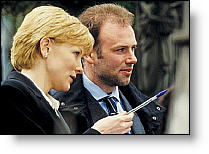 When Irish reporter Veronica Guerin was murdered in Dublin in 1996, the nation of Ireland went into shock. The government cracked down on those responsible and her death spurred a revival among formerly uncaring parents and teens to clear the streets of drug gangs. This intense, honest look at the life of the reporter is both touching and disturbing. It is never laborious and manages to walk a fine line without faltering.

Veronica Guerin (Cate Blanchett, “Elizabeth”) is an up and rising reporter who, when investigating minor crimes in downtown Dublin, stumbles into a drug hall. Witnessing children as young as four applying the needle, she becomes determined to do something to stop the rise in crime. The government seems to care very little. Local authorities cannot crack down on those responsible.

Even her sources aren’t about to talk. Enlisting the aid of her local snitch John Traynor (Ciarn Hinds, Persuasion), she begins a hard-nosed investigation that will eventually lead to her persecution and death at the hands of notorious criminals.

The entirety of this film is riding on the shoulders of the actors. I’ve always been a tremendous fan of Cate Blanchett and her talent, and her Veronica Guerin, while not gaining an Oscar nomination, is certainly an intense, courageous character with extraordinary depth. She is both flawed and heroic, innocent but worldly.

If nothing else this film demands viewers to ask what they would have done in her place. It makes no bare bones about the ending: from the first few scenes we know where this is going and the inevitable conclusion approaches as the audience experiences growing dread. The acting is all very solid and the score is beautiful, a blend of traditional and unique Irish music that swirls with unique vision.

For a film of this nature some violence and language is expected, but I feel filmmakers went way overboard expressing the “rough side of Irish life.” The f-word gets a regular workout after the first half hour, often appearing in every sentence. There are also at least a dozen abuses of Jesus/Christ’s name, which offended me almost more than the former obscenity.

Sexual content is at a minimum; there are a couple of coarse remarks and Veronica goes into a strip bar to question someone. (Scantily clad girls are shown pole-dancing in the background.) She also bursts in on Traynor in bed with his girlfriend (they’re not doing anything).

The most unnerving content comes from the implications that a man’s legs have been sawn off (gore minimal), and the several times Veronica is shot and/or attacked. A bullet goes through her leg. Her bullet-ridden body is shown several times. The hardest scene in the film to watch is when the drug lord beats her repeatedly while throwing her around in the gravel and calling her profane names. He finally throws her bloody and bruised into the car, and she tremulously drives away.

For all this excruciating content, the film also has a much deeper side that questions whether we should live for ourselves or do what’s right despite the consequences. Veronica deals with fear of placing her family in danger, but she also cares about the kids in the streets of Dublin… enough to put her life on the line for them. Respect and love is shown through her marriage to her husband, but also the affects of a working mom (one poignant scene has her child proudly showing off a skateboard, and Veronica asking him who gave it to him—she did).

I won’t try to excuse the content, offensive merely for the volume of profane language. I didn’t approve of it, but thankfully other viewing options (TVGuardian, editing companies) are now available to help lessen the sting.

Positive—Even though this movie is to the mainstream very offensive and at times a very rough movie to watch, I, in fact, thought this production was very well made. As I am from Northern Ireland I actually have been confronted with these harsh realities on a daily basis. I do wish to warn the people, that if you are not used to violence in movies, then this will be a rough movie to sit through as it shows the darker side of being a journalist in Northern Ireland. On the other hand, the story line was so well played …this movie was indeed a very well made production. Therefore, I give it a thumbs up for an older audience (18+) and advise people to take caution in the fact that what goes on in the movie is actually going on in real life.
My Ratings: [Very Offensive/5]

Sean Bogaard (Netherlands), age 22
Comments from young people
Positive—This is a film that interested me very much as I am from Ireland and watched all the news reports about Veronica on my TV in 1996 (many of which were in the actual movie itself). I liked the way it didn’t glamourise anything in the movie, which made it more real. But one thing it did fail to do, is go into Veronica’s motives. It had plenty of opportunity for her to do so with her mother and plenty of time to do it in, but it was left out. The language is very strong, but it should be kept in mind that many people in Dublin speak like that on a regular basis. It is definitely not for kids or the faint hearted.
My Ratings: [Very Offensive/4]

LF, age 17
Movie Critics
…blunt, realistic, bloody and depressing look at a world most of us will hopefully never know… a hard film to watch because of the violence …the depressing poverty …drug addicted children… verbal and physical abuse toward women… abundance of crude and foul language…

Eleanor Ringel Gillespie, Atlanta Journal-Constitution
…This is a self-congratulatory exercise in poor taste…

Wesley Morris, Boston Globe
…succeeds as a memorial to a gutsy journalist who changed a country…

Michael Wilmington, Chicago Tribune
…While the true story is a compelling one, this Jerry Bruckheimer-ized, ham-fisted biopic tells it with an overly sentimental gush…

Dr. Ted Baehr, Movieguide
…Blanchett and Schumacher do not fall into the trap of turning Guerin into a noble martyr …Her Guerin is fully as irritating as she is admirable. That is a brave decision for a filmmaker and actor to make—almost as brave as Guerin herself…

Joanna Connors, Plain Dealer
…The flag of glory on Blanchett’s performance is that she softens nothing.

David Elliott, San Diego Union-Tribune
…The main problem is that while the sequence of events may be lifted from headlines, the interesting and flawed film lacks the resonance of art.