for action violence, scary images and some language 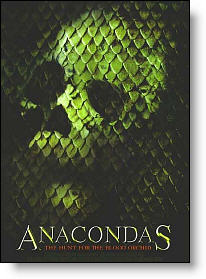 “Ananacondas” is an adventure movie with some terrifying twists and turns that may keep you perpetually on the edge of your theater seat. A motley crew of characters join together for an expedition, and, at first, they all have the same goal, to make a huge amount of money. But soon (when they are exhausted, terrified, and desperate), they end up feeling very differently about their common dream.

The Borneo river jungle setting looks very authentic and packs a good wallop even without the centerpiece, the huge CG snake who plays the title role.

When the movie begins, the river trip seems like it could be rather routine, but as things progress, the seekers run into increasing difficulties. Finally, they meet virtually insurmountable obstacles blocking them from their prize, the rarified Blood Orchid that blooms only once every seven years.

There is little time for character development in this movie because there is so much action, and not much time to take a breath between each hair-raising episode. There are some heroic acts and characters, but in my mind, not nearly enough to make this movie worth watching.

The giant snake moved too fast to be real, and never looked really believable to me. I kept waiting for a satisfying shot of the head of the snake so I could look into its eyes and see the power and coldness, but never got that pleasure. The rest of the movie does strive to look realistic, like the jerry-rigged riverboat which is a floating junkyard, and the continuingly deteriorating state of the actor’s costumes and hair.

Nudity is limited to a little cleavage, and for the most part, the female characters are treated with respect.

The language is crude throughout, and there is one rude gesture. There is reference to sex and drugs in the first few minutes, and more references to unsavory and sinful sex later in the movie. The violence is unrelenting. This is a movie that would easily have received an R-rating before they loosened the standards. There is animal-to-people violence, and people-to-people violence—all very graphic. There are intense multiple shots of human remains and suffering, and human betrayal of the worst kind.

I was disappointed in the cruelty depicted between the humans (not so much by the animals). Parents are warned that this is an R movie in every way. I found the use of graphic shots of numerous, realistic, dead human bodies very disturbing and disrespectful. I cannot recommend this movie to anyone.

Read our review of the first film in this series: Anaconda

Comments from young people
Neutral—The critics were right in saying that this movie made the first look like a horror classic. this movie was very disappointing. it was only worth going to see it for the very few snake attack scenes. in my opinion, more people should have died. the acting was pretty bad. my advice, rent it.
My Ratings: [Average/3½]

Daniel Robison, age 16
Neutral—The plot for Anacondas: The Hunt for the Blood Orchid is fairly simple: A major pharmaceutical company learns that a rare flower(the blood orchid) that is supposedly a floral version of the fountain of youth is in bloom. Not ones to pass up a chance to become potential billionaires, the company executives hire a team of professionals to embark on a mission into a primitive Borneo jungle and find and harvest said flower. Here’s the catch; the flower is only in bloom for one more week before it closes up and stays that way for seven more years. Throw in a hungry throng of alarmingly massive anacondas and a greedy team member, and you’ve pretty much summed up the movie. As you can well imagine, it does have its share of violence, but I don’t recall anything overtly explicit or graphic. Sexual content is limited to some mild innuendo and a few low cut tank tops. It does have language, though I am unsure how much and how strong it is, as my family owns a device (TV Guardian) that filters foul language. All in all mildly entertaining, if not unrealistic and clich`ed.
My Ratings: [Average/2½]

Kristine Hadeed, age 16
Negative—There were some scenes I did not care for. The cussing was also offensive, and too many blood scenes.
My Ratings: [Average/2]

Richard, age 15
Positive—When I walked in the theatre, I had no clue what was going to happen, boy was I in for a HUGE surprise! This movie kept me on the edge of my seat from beginning to end. Although it can be somewhat gruesome in a few scenes, I really enjoyed it. And yes, it does have a few cuss words but nothing to the extreme. I highly recommend this film to teenagers and adults.
My Ratings: [Better than Average/4]

Sarah, age 13
Positive—I loved this movie, I thought that it may be dumb, cheezey, fake and unable to carry the Anaconda name, The first one was really good, I also loved it too, but it was not as realistic as could have been, but the story was great, and there was some suspense and scary moment’s, This one was more realistic, still not the best, the first one the used a robotic Anaconda snake, however in the sequel, they used only computer graphics, which at times you tell, I liked the story, I thought it was fun and creative, I wasn’t really scared, but at times I’d jump up and down on my seat when there’s suspense, The actor’s weren’t too good, except the one black guy, I don’t remember his name… There was some cussing, they used “G*D” and “J*SUS” a few times and the F-word once; there were no G-Ds though, I would recommend it to anyone over 11…
My Ratings: [Good/5]

David Germain, Atlanta Journal-Constitution
…it’s little better or worse than the original. But, to be honest, the original… wasn’t very good…