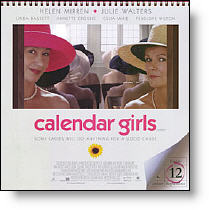 Why are people supposed to wear clothes? Answer

Featured actress Helen Mirren (a self-professed Atheist) is a nudist (once named “Naturist of the Year”). She has regularly visited nudist beaches. She also has been nude in numerous movies, including the X-rated “Caligula.”

Here’s what the distributor says about their film: “Based on a true story, Nigel Cole’s CALENDAR GIRLS has a mix of comedy and heart-tugging emotion that compares with British comedies FOUR WEDDINGS AND A FUNERAL and THE FULL MONTY. Annie (Julie Walters) and Chris (Helen Mirren), of bucolic Yorkshire, belong to the Women’s Institute (WI), which preserves traditional homemaking practices. While they’re just as dedicated as the other ladies in the group, Annie and Chris are adventurous personalities, and they poke fun at the WI’s tedious lectures on broccoli and fabrics.

In an effort to raise money for the local hospital while also spicing things up at the WI, the ladies decide to put a new spin on the WI calendar, which usually depicts landscapes or churches. The women will pose nude for the calendar while performing traditional activities like baking and gardening. It’s no surprise that the finished calendar is a wild success, bringing the ladies instant notoriety and adoration.”

Ann, age 33
Positive—The (real) story) of this movie is very good. Sometimes very touchful as the “girls” give all the support they can to their friend and her husband with cancer.

The nudity in the movie, although it could be avoidable, it is not out of the context as they did happen and were the real reason of the famous calendar (you can check the real story watching the documentary in the special features, including interviews with some of the real “calendar girls” and some original pictures of the first calendar). I’m a fan of Helen Mirren and the rest of the cast did a wonderful job.

You can watch this movie with your teenagers (although I don’t think they will be interested on this movie) and telling them the real story and the reason the “girls” did (and still do every year) this calendar. It was a new and different approach for charity. But it’s not suitable for the small ones.
My Ratings: [Better than Average/4]

Gustavo Bastos, age 45
Positive—Although I had read Christian reviews on this film before viewing, I tried to watch the film with an open mind. I found the overall atmosphere of the film to be family and friend orientated; the characters were loyal to oneanother and demonstrated what love and friendship should be. The pace of the film was slow, but managed to keep my full attention. There was a fair amount of mild swearing, a reference to teenage drug abuse (the teenage son tried smoking a joint made with oregano). The film was certainly less offensive than most British soap operas. As for the nudity, it was extremely brief and necessary, given the subject matter of the film. I would say that this film would be okay for a teen/adult audience.
My Ratings: [Better than Average/4]

Tina Coveney, age 34
Negative
Negative—This fun-loving and light-hearted movie does a good job at depicting one’s aging as a beautiful thing as opposed to the deterioration of one’s physical appearance. It goes against what our culture says about what beauty is and hits the mark closer to what the Bible says is beautiful and that is the person and not the appearance.

Unfortunately, I would not recommend this movie as it does have the following components that I believe were both unnecessary and inappropriate for a movie with such a good message. It showed a mother finding a nudey magazine beneath her son’s bed and she places it back where she found it and reveals her approval of such material. It also shows the chest of one of the ladies in the movie during the picture taking.

The use of profanity is also very prevalent as North American and British swear words were used quite often in the movie. It could have been a very cute, feel-good movie and they hadn’t placed all of that other ungodly material in it. Sorry, but you are better off not seeing this movie. There are better selections.
My Ratings: [Average/4]

Tom Neven, Plugged In
…Midway through the film, the screenplay dissolves into clichés…

Roger Ebert, Chicago Sun-Times
…The cinematic depiction of the mature, imperfect female nude is usually seen as lurid… or grotesque…; here, it is triumphant and… sexy…