for strong language, sexual content, drug use and some crude humor. 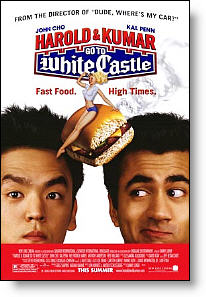 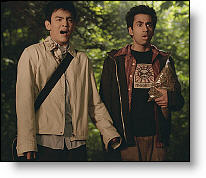 What would you do for a White Castle hamburger? Would you drive for hours, go to jail, perform surgery, ride a cheetah, steal a truck, or hang glide? The title characters of this movie would, and did. As for me, I would probably need someone to pay me $100 to eat a White Castle burger, and I would probably need more than that to see this movie again.

Plot? I revealed it in the first two sentences of the review. That is about as deep as it goes. Two pot-smoking minorities (John Cho and Kal Penn) on a quest for hamburgers. One wacky adventure after another. Sound funny? It wasn’t. I laughed once or possible twice. Not a good ratio for an hour and twenty minute “comedy.”

However, if you want to talk about high ratios, we can examine the ratio of vulgar words and references. Overall, that comes down to about two per minute. Conservatively, I counted no fewer than twenty different objectionable words used throughout. This included vulgar references to body parts and fluids, as well as the more common, but nonetheless offensive kind. In fact, there were more than 50 uses EACH of the two most common vulgarities found in “R” rated movies. Add to that another 50 uses of various other offensive terms, and add to that male and female nudity. In addition, there are a dozen or more instances of taking the Lord’s name in vain. You get the picture. You would need a calculator and a dictionary of crude language to quantify this constant assault.

There is a “Christian” character with a brief role in the movie. His name was Freakshow (Christopher Meloni), and he is a psycho country hick with boils who speaks in “Jesus loves you” terms and offers his wife for sex.

What I can’t figure out is: (1) Why would someone decide to make this movie; (2) Why other people in the theatre found any part of it funny, and perhaps most amazingly; (3) Why did two well known and prominent movie critics give this movie two thumbs up? I have no answer for any of those questions.

Are you interested in wasting $8.50? You would be better off buying 20 sliders. They are likely to make you less sick than seeing this foul-fest.

J.P. Mangalindan, MovieWeb
…Silliness is the movie’s only ambition…

Wesley Morris, Boston Globe
Positive
Positive—…this is a very offensive movie. If you’re not strong in your faith, don’t see it. If, in your faith, you cannot bring yourself to watch things which offend your sensibilities, please, do not go to see this movie. On the other hand, if you know going in that you’re going to get a movie about foul-mouthed pot smokers, and the adventures that they go on, and you know you can handle that, you’re in for a great time. My stomach still aches from laughing so hard (about 16 hours after I saw the movie).

Yes, there is harsh language, and one nude scene which was absolutely pointless. But, there’s also quite a few jokes in there that leave you laughing well past when the scene ends. Personally, I can handle this stuff (when you’re a jazz musician for a living, hearing foul language is nothing…). However, I know many people can’t, so I cannot stress this enough. If you are offended easily, DO NOT GO. If you can, however, it will be the best $9 that you’ll spend all summer.
My Ratings: [Very Offensive/3½]

Paul, age 29
Positive—This is no more than a 2005 version of eating goldfish and stuffing VW bugs. It is very funny and probably turns teens to understanding the down side of pot. Kids do not live in a vacuum and this is pretty innocent next to films like “American Pie”
My Ratings: [Average/3½]

Tom Daley, age 57
Comments from young people
Positive—I thought this movie was very funny. Yes, it does have drug use, but this will not make your kids do drugs! …I have seen many movies with sex, drugs, and other “objectionable content,” but I will still never, ever do drugs, and I’m going to wait until marriage to have sex…
My Ratings: [Average/4]

Ashley, age 14
Positive —I think this movie is extremely funny! Yes, it does have lots of cussing, some nudity, drug use, etc. but what movie doesn’t now a days!? I think it’s a must see.
My Ratings: [Very Offensive/3]