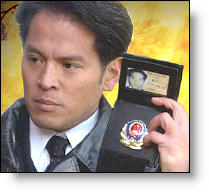 Persecuted church—Why and how should we pray for suffering Christians? Answer

Home Beyond the Sun takes place in present day China and narrates the experiences of a Bible college student who goes there to teach English for a semester. While there, Jenna (Melysse Ade) meets an eight-year-old Chinese orphan, Chu Lee (Molly Sayer). In the movie’s opening flashback, we learn that Chu Lee’s mother gave birth to her out of wedlock and without a birth license. Her father reported her to the state apparatus who, when they come to arrest the mother, unnecessarily kill her with a rifle from close range. Chu Lee is left in the care of a private orphanage and the story then picks up eight years later when Jenna arrives in China.

The movie is earnest in its attempt to inform us about the persecution of Christians in China, about the plight of unwanted children languishing in orphanages, and about the practical value of living life and making decisions based on a Christian worldview. The characters encourage one another to “trust in God,” remind each other of the “power of prayer,” to desire “what God wants,” and to realize that we’re all “a part of God’s plan.” Curiously, with the exception of a reference to Psalm 23 (and possibly a nod to Psalms 10:12), there are no quotations from scripture or even references to key scriptures. I don’t think this is a major fault, just an interesting gap in the context of an openly Christian film.

It would be easy to criticize a movie like this on formal grounds, but it would only reveal a reviewer’s bias for privileging form over content. To be charitable, the film does not meet the Hollywood production standards we’ve all become accustomed to. Although the movie appears to be filmed in digital video, it has that home-movie, soap-opera look that undermines its credibility. This is not a terrible fault, just a stumbling block for viewers accustomed to the lush aesthetics of big budget Hollywood films.

While I can’t recommend it on the basis of its filmic quality, I believe it can be a valuable instrument for instruction in Christian elementary schools, in home schools, and in Christian homes. For children under the age of 12, the movie teaches that life isn’t about video games, soccer matches, and mall mashing. It is important for young Christian children to see that in some countries, the mere ownership of a Bible gets you roughly handled and hauled off to prison. They will learn that prayer sometimes must be done in one’s “closet” (Matthew 6:6), because the alternative is arrest, social stigmatization, and poverty resulting from a criminal record that precludes employment in any meaningful line of work.

Children belonging to intact, nuclear families will gain insight into the pain of being an orphan, as both Chu Lee and Jenna are for much of the movie. More importantly, they will learn that even orphans have a Father who loves them, speaks to them through His word, and answers their faithful prayers in accordance with his “perfect and pleasing will” (Romans 12:2 NIV).

Additionally, the movie serves a useful purpose in publicizing the plight of China’s estimated 110,000 orphans, at least some of whom are available for adoption. Adoption is a wonderful opportunity for Christians who can’t have children of their own, or for those who would like to have an additional child. The movie’s mission, in part, is to convert the forsaken orphans to the status of the what the movie calls the “found forsaken” by sharing the temporal wealth of this fortunate land and the eternal riches of a life lived in communion with Jesus Christ.

In an era when multicultural values are co-opting Christian values, and group identity trumps individual identity, American Christians need to stretch their cultural limits and bring the world to them if they themselves can’t go out into the world, as young people like Jenna do. Adopting a child from China or Africa or Eastern Europe is one godly way to give something back to God and to rescue a child from the loveless horrors of institutionalized existence, to say nothing of disease, poverty, and various kinds of abuse.

“Home Beyond the Sun” has no objectionable elements and is a movie whose greatest utility is for teaching young Christians about the world outside of their own circumspect lives.

Positive
Positive—The movie “Home Beyond the Sun” was an excellent movie. We enjoyed it very much and were blessed beyond our expectations. Even though the ending was hard for some to believe possible, I believe all things are possible with God. Being based on a true story, I would like to find out more about this family and how they are doing, since this all happened. I’m sure this was a low budget film, but the acting was superb, and I did not miss the “Hollywood” effects, at all. It was heart warming, suspenseful and entertaining. I’m sure the happenings in this movie are not always the case in all adoptions from China, but I believe it was true in this story.
My Ratings: Moral rating: Excellent! / Moviemaking quality: 2½

Cindy, age 52 (USA)
Positive—“Home Beyond the Sun” was very good in its story telling…but the acting was not the greatest, but reflected the story well. My wife and boys gave it 5 stars on Netflix. Christians will enjoy the faith aspect and how God works things out for the good. …Great watch for the family!!
My Ratings: Moral rating: Excellent! / Moviemaking quality: 2½

Lewie, age 39 (USA)
Neutral
Neutral—For the most part, I enjoyed the movie, and I believe it could be a good educational tool for Sunday School classes and youth groups. I instantly fell in love with Chu Li (Molly Sayer)who was so adorable. I found Jenna to be a little annoying, though I think Melyssa Ade did a fine job portraying her. In fact, it has made me consider international adoption, should the Lord lead me to spouse.

I have three complaints about the movie. One, almost all of the movie takes place in China, but no one speaks Chinese. Mel Gibson’s “The Passion…” was annoying because it was filmed entirely in foreign languages; this film should have featured some Chinese with English subtitles, especially when the Chinese characters communicated with each other.

Second, the film had this made-for-home video feel to it. It was painfully obvious that it was a low budget production, saved almost entirely by Ms. Ade’s performance. (She has came a long way since portraying Janessa in “Jason X.”)

Finally, the ending was just unbelievable. In real life—even when God is totally in control—things are never wrapped up as neatly as when Chu Li and Jenna become sisters.

Overall, it was a compelling story, with a fine performance by the lead actress, but a poor production from Collin Chivers—an award-winning Christian film-maker. “Home Beyond the Sun” could have and should have been so much more.
My Ratings: [Excellent!/2]

Freddie McNabb, III, age 37
Negative
Negative—Home Beyond the Sun: I was very offended by this film’s depiction of the Chinese people and the adoption process. Having gone through the process and now the Mother of a beautiful daughter from China, I was appalled at the ignorance of the adoption process displayed by the makers of this film. The adoption process is long and arduous requiring approvals by both the US and Chinese Governments. There is currently over a four year wait to adopt. Adoption of special needs children (including older children) has dramatically increased. You do not casually walk into a Chinese orphanage and pick out a child. You do not leave China with a child without the proper US visa and consulate approvals. When we travelled to China, we were treated very well. The Chinese are friendly and welcoming. When we met our daughter’s caregivers and orphanage director, it was very apparent that they loved the children and did their best to care for them. I realize that the film is trying to promote Christianity but to do so at the expense of the Chinese people is not Christ-like.
My Ratings: Moral rating: Extremely Offensive / Moviemaking quality: ½