for sequences of stylized martial arts violence, and some sexuality 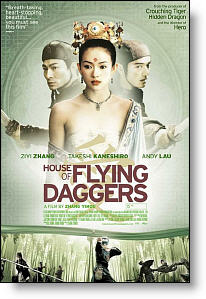 Here’s what the distributor says about their film: “Set in the year 859 AD as China’s once flourishing Tang Dynasty is in decline. Unrest is raging throughout the land, and the corrupt government is locked in battle with rebel armies that are forming in protest. The largest, and most prestigious of these rebel groups is the House of Flying Daggers, which is growing ever more powerful under a mysterious new leader. Two local captains, Leo (Andy Lau) and Jin (Takeshi Kaneshiro) hatch an elaborate plan to capture the new leader. Jin will pretend to be a lone warrior and rescue the beautiful, blind revolutionary Mei (Ziyi Zhang) from prison, earning her trust while escorting her to the secret headquarters of the House of Flying Daggers. The plan works, but to their surprise, Jin and Mei fall deeply in love on their long journey to the House.”

For some reason, people like to add an occasional P.S. at the end of their letters to others. Why they can’t just include that extra information in the actual letter, I don’t know; it usually ends up being something that wasn’t all that important to begin with.

“House of Flying Daggers” is an extraordinary new film from director Zhang Yimou. The Tang Dynasty is in shambles, and a corrupt government now rules the land. Rebel armies are forming around the country, but the most powerful and feared is the House of Flying Daggers. Their old leader was killed, and now the government is after the mysterious new leader, whose identity is unknown. The local police think they have found one of the members, who they believe to be the lost daughter of the House’s former leader. She is Mei, played with astonishing force by Zhang Ziyi (or Ziyi Zhang as she now goes by). Mei is a blind dancer, recently employed by a local brothel. The police arrest her after an incident with the police captain, but she is rescued before they begin to torture her. Her rescuer happens to also be a police officer who is posing as a lone warrior, in hopes that she will lead him to the leader of the House.

Having said all that, “House of Flying Daggers” almost uses its plot as a side item. The real beauty of this film lies in its visuals, which rule the movie. The cinematography is breathtaking; Yimou is clearly having a blast showing us the amazing array of colors he has prepared for the journey to the House. In the midst of the smorgasbord of color, there are individual scenes that defy belief. The most amazing features something called the “Echo Game” and will leave you in awe of the originality and careful grace with which all this beauty is presented.

The content in the film is rather mild throughout. The scenes in the brothel at the beginning are fairly tame, as is a scene where the police officer spies on Mei bathing (We see her from the shoulders up). There is a couple instances of heavy kissing on the forest floors, but nothing to extreme. Something we assume is a sex scene pops up near the end, and both the man and woman are without shirts, but nothing but their backs are seen. There is some mild profanity, albeit in subtitles. The violence is also fairly mild, till the final fight scene that turns rather bloody, which will probably be the only thing some might find offense with.

Now, about that final scene. There are a couple of moments where I thought the movie was going to end, but it just decided to keep going. Like those letters with the extra P.S. at the end, I was fine with it at first. But, instead of wrapping up beautifully, it adds another P.S., then another, and then another, till we simply want it to end before it ruins everything that has come before it. When the ending finally comes, it doesn’t quite ruin “House of Flying Daggers,” but it does taint an otherwise remarkable film.

Positive
Positive—Plenty of twists to make for an in-depth plot and the martial arts sequences (with the exception of the echo game) are not as cheesily overexagerated as in Hero and Crouching Tiger (Running and fighting on water? Get real!). The sensuality may be a bit much for younger viewers. A scene early in the movie where the lone hero/polic officer forces himself on a dancer would definitely be objectionable for families.
My Ratings: [Average/3½]

Tyler, age 22
Comments from young people
Positive—A very great film with amazing fight sequences and excellent cinematography, but I gotta warn you, that there are 3 sex scenes and plenty of sometimes graphic swordplay, but if you can handle them it is a great film.
My Ratings: [Better than Average/4½]

Jonathan, age 9
Positive—[Non-Christian] I loved this film! It was visually spectacular, and the acting was very good. I really love foreign films, and if you are a fan of the genre, I would highly recommend this movie.
My Ratings: [Good/5]

David, age 15
Positive—…I was amazed at the movie making and technical aspects, but what really got me was the story. One step above “Hero,” the main theme of the movie was to be as free as the wind (strange to come out of a communist nation). The other theme is two people risking everything for love. This is the most powerful love story I have ever seen. I personally came out of the theatre crying. A must see, but not recomended for young audiences.
My Ratings: [Better than Average/5]

Michael Wilmington, Chicago Tribune
…the most gorgeous movie of the year…

Jami Bernard, New York Daily News
…though the picture is full of swirling, ecstatic motion, it is not especially moving…

E! Online
…the most seamless piece of sensuous expressionism Zhang has created since ‘Ju Dou’…

David Chute, L.A. Weekly
…an outrageously gorgeous spectacle of balletic aggression… it offers something we rarely encounter in a whirling martial-arts extravaganza: a romantic passion that’s woven into the very fabric of the action…