for language, sensuality and brief violence 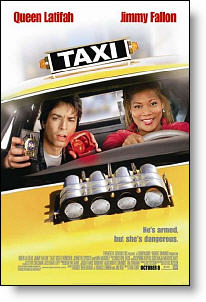 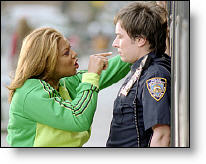 Here’s what the distributor says about their film: “This is the story of a single mother and pizza deliverer, Belle (Latifah), who decides to use her record for making the speedy deliveries to another use, becoming a cabbie. As she quickly becomes famous for racing through the city at speeds upwards of 135 mph (including school zones), a young eager cop (Fallon) who lacks Belle’s driving abilities convinces her to help him catch a gang of beautiful female bank robbers (led by a Brazilian diva played by Bundchen) using her amazing driving abilities.”

One of my favorite comedies to watch during the college days was “Taxi.” You remember this ABC favorite that ran from 1978 to 1983. I enjoyed the characters and most of the humor. It focused on a group of people who dreamed of doing other things while driving a cab. Many of the cast members like Tony Danza, Christopher Lloyd, and Danny DeVito enjoyed success after cancellation. The most memorable was the late Andy Kaufman. If you even remotely thought that a film by the same title could be funny.think again. I know that there is great creative comedy out there. To watch this film is to imagine this genre on the endangered species list.

This movie is not only lacking in humor. It is also lacking in reality. “Taxi” makes absolutely no sense at all. It is a remake of the 1998 French film by the same title. It must be a huge disappointment for Queen Latifa fans. She has appeared in some very likeable roles. Jimmy Fallon is also an extremely poor excuse for the traditional bumbling cop routine. Where is the next generation of Peter Sellers? It just seems like most of the talent borrowed from “Saturday Night Live” cannot exist beyond a 10-minute sketch. You not only have to check your brain at the door, but also all reason. I could go on and on and on and tell you how unfunny this movie is, but I think you already get the idea.

One of the primary plot points in this flic is several chase scenes. The film is set in Manhattan, but most of the chases were shot in LA. I know that Hollywood does this all the time, but at least they could have changed the street signs. That is just plain sloppy!

Let’s break down the rest of the story. Officer Andy Washburn (Jimmy Fallon) has just wrecked his third police car and killed a parrot. His precinct boss (Jennifer Esposito) is so tough that she takes his drivers license away. I guess that you can’t use a taxi unless this tragic event happens. He also would never have discovered the privately owned customized taxi.

Fast-talking Fallon and the conceited Belle (Latifa) never do click in this flic. Don’t put all the blame on the Queen. I don’t think anyone would have clicked with Fallon. She does seem to find herself lately in clichéd ethnic roles. You know the ones that are desperately trying to help all the uptight whites. I know that director Tim Story has found some success with the movie “Barbershop.” This time around the block is just too choreographed.

What Mr. Story lacks in humor, he tries to make up some ground by tossing in some sexy bank robbers. The most recognized is the Brazilian Victoria Secret fashion model Gisele Bundchen. That fact cannot make up for an abrupt ending that does help to put disappointed moviegoers out of their misery.

The language and lust factor are just a few of the additional spoilers in this film. My VERY strong recommendation is to skip this one.

There is great hope for Christian comedy. I recently saw Paul Aldrich. He is hilarious. You can read and hear more about him at www.paulaldrich.com. I will be reviewing his new comedy release soon.

Neutral—Though the movie was less offensive than average and had some good moments. There was a prurient, offensive scene that took the movie way downhill. For about one minute (way too long), the Victoria Secret bankrobber “frisks” a female cop for a weapon—but is actually groping her. The scene implied lesbian sexuality.
My Ratings: [Average/3]

Andrew Z., age 23
Negative—I saw this at a sneak preview showing at my university. It’s funny in some parts but disgusting and vulgar in others.
My Ratings: [Average/3]

Shannon H., age 23
Positive—This is a fun movie to watch for adults or older teens. There is some mild offensive language, and Belle has a live-in boyfriend. The synopsis calls her a single mother but she does not have any children in this movie. The movie storyline is humorous and the car chase scenes are fantastic! We found it a “fun” movie to watch.
My Ratings: [Average/4½]

J W Cosper, age 58
Positive—This movie was great. If you can get past the fantasy storyline and the language, then it is a great family movie. There was hardly and sensuality at all in this movie. The only thing is this girl in this bathing suit trying to avoid a policeman. I do recommend this movie to you.
My Ratings: [Average/4½]

John Edwards, age 36
Positive—This was a great movie. There was only minor cursing and it has some awesome car scenes. There is one part of it that has some lesbian things, but that only lasts for about a minute. This movie is suitable for the ages of 13 and up. I would highly recommend this movie for people who like comedy movies. Queen Latifah and Jimmy Fallon played excellent roles and were very funny.
My Ratings: [Good/5]

Jessica, age 23
Positive—I thought this movie was awesome. It had minor cursing, but it wasn’t to offensive. There is one scene with a Victoria Secret model in some skimpy lingerie who is trying to persuade a cop not to check her car trunk, but that’s only one scene and lasts for about a minute. There is also a scene with the same model who is frisking a female cop when really she is doing it with sexual intentions. They had superb acting with Queen Latifah and Jimmy Fallon who played excellent roles. This movie is probably suitable for the ages of 13 and up. All in all I thought this movie was excellent except for those two scenes.
My Ratings: [Better than Average/5]

Jeremy, age 27
Neutral—…not the greatest film and some morally questionable innuendos (some lightly veiled and others not at all). However, having said that. The car action was fun, and the majority of the interactions were harmless. Not great for everyone but guys in mid to the late teens will like it as my son did (and there is a lot worse out there).
My Ratings: [Average/2]

Steve Brown, age 47
Comments from young people
Positive—…by far the best movie I’ve seen this year. They kept the cussing to a minimum (like 1 or 2 times). There was a part where Gisele (Vanessa), a beautiful Victoria’s Secret Model, searched another woman for weapons. Others have said it was horrible and sexual, but it was just a simple search… better girl and girl than girl and guy. The movie overall was appropriate for kids 8 and up.
My Ratings: [Good/5]

Lauren Thakar, age 13
Movie Critics
…much better than many formula comedies… fun ride, but be careful…

Eddie Turner, Movieguide
…can’t steer clear of tedious banter… only real laughs are provided by Ann-Margret who, as Washburn’s tipsy mom, turns out to be a funny drunk…

Jay Boyar, Orlando Sentinel
…certainly doesn’t aspire to high art. Unfortunately, neither does it quite hit the mark of solid popular entertainment…

Wesley Morris, Boston Globe
…surprisingly funny… as long as you don’t question too many plot particulars…