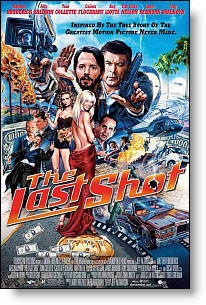 “The true story of the greatest movie never made.”

Here’s what the distributor says about their film: “The focus of this ensemble comedy is a struggling filmmaker whose dream of directing his script by working outside the traditional Hollywood system comes true (as long as he films in Providence, Rhode Island)… until he discovers that his miracle producer (Baldwin) is actually an undercover FBI agent who is just using the production as part of a sting operation designed to connect reports of union manipulation with… the mafia.”

Michael Rechtshaffen, The Hollywood Reporter
…Contrary to popular belief, most people in Hollywood can laugh at themselves, but it helps if the gag is funny. “The Last Shot,” for the most part, isn’t.

Glenn Whipp, L.A. Daily News
…a star-filled, dark-toned satire …wildly uneven, but contains moments that are right up there with “The Player.”