for violence and some language 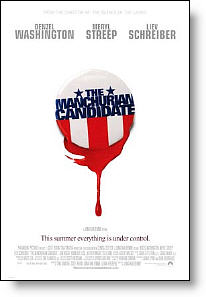 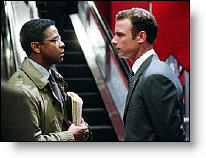 “This summer everything is under control.”

Here’s what the distributor says about their film: “A psychological thriller, “The Manchurian Candidate” stars Denzel Washington as Army Major Bennett Marco, a career soldier who grows suspicious about his experience in Desert Storm after Squad Sergeant Raymond Shaw (Liev Schreiber), son of the powerful Senator Eleanor Shaw (Meryl Streep), becomes a candidate for Vice President.”

Some Democrats may want to see this movie because it complements the rhetoric of “Fahrenheit 9/11” and some of the (now discredited) assertions by Joseph Wilson and Richard Clarke. Some Republicans may not want to see it for the same reasons.

The film’s leftist polemic was revealed in a New York Times article:

To understand this movie you must know something of its predecessor. The 1962 original (directed by John Frankenheimer) had an anti-right slant. It was made in the wake of the Cold War and in the aftermath of the trials on Communist party membership in Hollywood by the House Committee on Un-American Activities (1940s-1950s). In a stunning reversal of truth, Frankenheimer’s leftist myth portrayed the Republicans as communists. Republican power-broker, Eleanor Shaw (Angela Lansbury), and her brainwashed son, Raymond Shaw (Lawrence Harvey), are communist agents controlled by spies from Communist China and the USSR. Upon certain cues, Harvey assassinates a moderate Republican senator and a moderate Republican columnist. He attempts to assassinate the moderate Republican candidate for President.

One year after this story of a communist-brainwashed Republican assassin attempting to kill the President, the left had to deal with the news of a Democratic Lee Harvey Oswald returned from communist Russia and assassinating President Kennedy. As a result, “The Manchurian Candidate” (1962) was pulled from theaters.

The premise of director Jonathan Demme’s 2004 version of “The Manchurian Candidate” is that an international (i.e., Halliburton) conglomerate named Manchurian Global has used its scientists to kidnap and brainwash a company of American soldiers during the first Gulf War. The viewer is to understand that this is a metaphor. War. Americans. Brainwashed. Get it? The candidate, Raymond Shaw (Liev Schrieber), returns to the States as a Medal of Honor winner and ends up on the ticket as the vice-presidential nominee.

Denzel Washington, as his former commanding officer, Ben Marco, investigates him after he has troubling dreams that contradict the accounts of Shaw’s heroics. He gathers evidence in one shocking scene by climbing on Shaw and gnawing a hole in his shoulder to remove a microchip with his teeth. The scene provides Demme an opportunity to show Shaw superimposing his bloody fingers on the American flag. Unfortunately, it is also rife with cultural associations that Demme should have avoided—like Mike Tyson biting off a chunk of Evander Holyfield’s ear, or zombies taking bites out of people’s shoulders in Romero’s “Night of the Living Dead.” The comparison to “Night” is apt in more ways than one since Romero’s film—like “The Invasion of the Body Snatchers”—can be read through the lens of Cold War anxieties in which brainwashed neighbors turn into collectivistic cannibals.

The iconography of “The Manchurian Candidate” remake is both racial and cultural. Whereas the original played off degrading comparisons to Abraham Lincoln to satirize Republicans, this version shows several seemingly trivial, but carefully filmed, incidents in which black characters have confrontations with evil white men. The backdrop for the racial discourse is the American flag, which the party of Evil White Men display everywhere: on television monitors, on jacket lapels, on campaign stages, in the rafters, etc.

After a nuanced performance for half of the movie, Demme reduces Marco (Washington) to the stock figure of the angry black man. Marco punches a white detective in the nose, yells intimidatingly at white pedestrians, and holds up the photograph of a white man to a black FBI agent telling her to “make a decision” about who’s guilty, himself or the guy in the photo—black face or white face? The ending resolves guilt with a cultural eraser: the black-faced character is Photoshopped in real time to reveal a white-faced killer beneath. Truths are not important—cultural myths are.

The director uses a background soundtrack to telegraph more of the movie’s ideology than do the images. Some of the soundbites that I noted are: “The grandmother can pay for her medicine, or she can pay for her food.” “This isn’t an election, it’s a coup! It’s a regime change!” And my personal favorite, a breathless report that “falling chads caused delegates to hide under tables and run for the exits!”

The film avoids using the terms “Republican” or “Democrat.” Instead, it uses racial coding. Ever since the Warchowskys used the racist philosophy of communist Cornell West (Race Matters) in their movies, leftist films have featured black characters conspicuously exercising authority over weak or venal white characters. All the evil guys are white males (pace, Merryl Streep), and all the black characters are shown demonstrating either physical or moral authority over them. This has become a familiar leftist trope.

The movie’s “R” rating is due to language (misuse of god’s name and various vulgarities) and violence. There are disturbing torture scenes in which a black character shoots a white character, and the white character graphically strangles and suffocates the same black character two different times in two different ways. Perhaps Demme couldn’t decide which image was more shocking, and so included both. Just as Frankenheimer made Republicans communists, and a priest into a killer, in Demme’s mythic world, up is down and down is up.

Myths are simply stories, and stories can be true or false. Christians remember the myths published by the Pharisees in the wake of Jesus’ resurrection—that he didn’t perform miracles, the resurrection was a fraud, etc. However, truth can never be extinguished; it can only be marginalized. So one function of false myths is to undermine true myths. Atheists attempt to counteract Christianity by producing competing myths that dilute, corrupt, or defame the truth. That may be why the left and much of the media villified “The Passion of the Christ,” it was a powerful retelling of the truth in their own mythic format. Gibson’s Christian myth undoes much atheistic mythic and the left hates that.

For Christians, there are biblical principles essential to confronting propaganda and false myths:

Preach the Word; be prepared in season and out of season; correct, rebuke and encourage—with great patience and careful instruction. For the time will come when men will not put up with sound doctrine. Instead, to suit their own desires, they will gather around them a great number of teachers to say what their itching ears want to hear. They will turn their ears away from the truth and turn aside to myths (2 Timothy 4:2-4).

Because it is what they want to hear, many people today turn away from truth and “turn aside to myths” (no matter how hole-ridden).

Positive—I saw this movie mainly because of Denzel Washington and he has once again impressed me with his superb acting. I know for a fact that Denzel is a strong believing Republican, and he tore Meryl Streep to pieces when being interviewed with Katie Currick. In the interview, Streep accused Bush of not being a true Christian because he went to war with Iraq, and she claimed that it was not something that Jesus would’ve done and that Jesus didn’t get angry so there would be no excuse for him to invade Iraq. She brought up parts of the Bible which she misused and Denzel accused her of taking Bible verses out of context which was exactly what she did. He also noted that Jesus went into the temple and knocked over everything trying to prove to her that Jesus had somewhat of an anger and he brought up the times in the Old Testament with David, and the wars with the Gentiles proving that God allowed war (and approved) of it then, too so war is not technically sinful and he said that it was wrong of her to accuse Bush of murdering our young men and women.

All in all, it was a great movie. There are some scenes in which children under 14 should see because they are horrific.
My Ratings: [Better than Average/5]

Kim, age 25
Positive—“The Manchurian Candidate” is one of the best thrillers I’ve seen in ages. It’s an entirely different vision from that of the original, but it holds up well. The performances are standouts all around, especially Meryl Streep as a manipulating senator. She snakes her way through this movie with incredible presence, making every scene that much better.

On the questionable stuff: There’s language, but it’s only a PG-13 amount (Bourne Supremacy had more language). Violence is dark and graphic, but it doesn’t saturate the film and the instances are brief. I’m surprised this film didn’t get a PG-13 rating, considering that I’ve seen far worse PG-13’s for both violence and language.
My Ratings: [Better than Average/4½]

Ryan Holt, age 18
Positive—My husband and I thoroughly enjoyed this “political thriller.” While it did show the deceptiveness of a large company, we didn’t find it to be “Bush bashing” at all. Yes, many of the “bad guys” were Republicans (though it didn’t come right out and say so) but I think people are reading more into it than needs be. Denzel Washington did a great job, as did Meryl Streep in her wicked role. There weren’t any sex scenes, violence was moderate and I don’t remember the language being overly offensive. If you want to have a great movie night, go see this one.
My Ratings: [Better than Average/4]

Rachelle Smotherman, age 31
Negative—Disturbing material. Violence the viewer has to endure includes drownings, asphyxiations, torture and point blank shootings. The central theme is brainwashing. No viewer, Christian or otherwise, should have to watch such content. Strong acting and a suspenseful story are not enough to recommend this film. If I hadn’t been with a group of friends, I would have walked out. AVOID.
My Ratings: [Extremely Offensive/1½]

Todd Adams, age 37
Positive—…I don’t believe that any of the characters mentioned there were cast as white for the supposed agenda of some type of racial undertone. This reviewer is seeing everyone as white or black and trying to make something of it. If Tom Hanks had played Denzel’s part, nothing in the screenplay would have been changed. To attempt to find these racial messages is to take the film completely out of context, in my opinion.

All in all, I believe that this is an entertaining thriller of the first order. The flashbacks to the brainwashing sequences were a little disturbing. The language was, for an R-rated film, not as filthy as many films of the sort. Both because of content and of subject matter I wouldn’t take young children to this movie, but for older teens and adults I think it is an entertaining and relativly clean film that lends to a little political discussion as you leave the cinema.
My Ratings: [Average/4½]

Josiah Hager, age 20
Positive—…I saw Manchurian Candidate and in no way found it to be anti-Republican propaganda…
My Ratings: [Average/4]

Andrew Michels, age 20
Positive—…Good movie, I enjoyed it. They used the Lord’s name in vain and that brought the movie down IMO. Denzel did a wonderful job on this flick. He has to be one of the best actors of this generation
My Ratings: [Better than Average/4]

Tom Neven, Plugged In
…Disturbing in both its manipulation of our fears and the manipulation it suggests could be possible in our world, “The Manchurian Candidate” is a psychological thriller that is hard to enjoy.