for crude and sexual humor, language and some drug references. 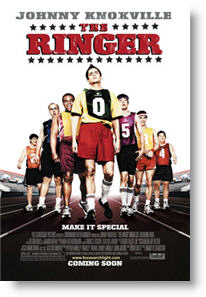 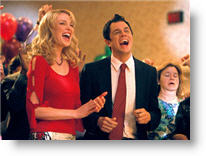 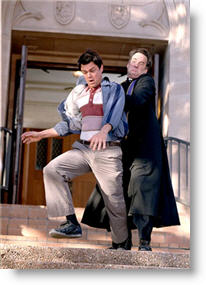 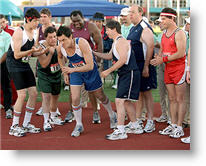 “Special has been redefined.”

Johnny Knoxville stars as Steve, who is the ultimate “nice guy” forced into a scam to fix the Special Olympics in order to pay for an operation for a dear friend who had an accident while tending his garden. Steve and his uncle devise a plan to take out the handicap superstar athlete by beating him in the multiple sport competitions. They figure that because Steve is what many would consider normal and not “special,” that he will win with ease. It doesn’t hurt that Steve was a starting athlete during high school. As always, there is the stereotypical love interest, the parallels of facing your crime and the befriending of some of the Special Olympians themselves, but this movie actually took me by complete surprise.

During the first 15 minutes, I was about ready to walk out. It appeared that this movie had no real substance, and I began to think that the idea of doing a movie based upon the disabled was terrible. Then, out of nowhere, I found myself really enjoying this movie. Is the movie predictable? Absolutely, but “The Ringer” is a lot of fun, and something I was able to sit back and enjoy. Just don’t expect an Academy Award winner. After viewing this season’s big budget blockbusters, think of “The Ringer” as a secondary treat, for those who want some good laughs at humor that is not too raunchy.

Something else that I could not help but notice were the many pro-conservative points made throughout the movie—a multitude of political comments that seem to encourage the current administration, as well as a few comments that are surprisingly pro-Christian. I was a bit surprised; this isn’t the usual Hollywood trend.

Parental Warning: I do think the PG-13 rating is appropriate for this movie. There is one F-word, but besides that, there is not much foul language. There are a few dirty jokes here and there, but, overall, the movie is a mild PG-13. I have seen more offensive movies that were rated PG. I suspect they tossed in the F-bomb to avoid getting a PG.

Here’s what the distributor says about their film: “When Steve Barker (Johnny Knoxville) finds himself running dead last in the corporate rat race, he sinks to an all time low… he attempts to rig the Special Olympics by pretending to be intellectually challenged.

But, Barker is completely out-classed by his fellow Olympians, who are not only better athletes; they’re just plain better people. And they’re on to him. But rather than rat-out the rat, they join forces with him to once and for all beat Jimmy, the cocky reigning champion of the annual games. With a work-out regime uniquely their own, they train Barker to go for the gold and, in the process, show him what’s at the heart of a true winner.”

Positive—I thought this was a good movie. There was some swearing in it, but it really isn’t as bad as the commercials or people make it out to be. The only reason I went is because I heard that the movie is actually very tactfully written and the movie’s bark is worse than its bite, which was completly true. The movie’s heart definitely is felt. Johnny Knoxville has a new found respect for special people, and this movie was even endorsed by the Special Olympics.
My Ratings: Offensive / 4

Mike, age 20
Positive—I missed the last 5 minutes of this movie because the theater caught on fire, but I did see most of it. This wasn’t as funny as I thought it would be, but was a lot more heart felt. I left the movie with a better understanding of the capabilities of the mentally handicapped. I don’t know anyone like that and so don’t know how to respond to them in social situations, but this movie helped me to WANT to learn more and be able to interact with special needs kids. What a great movie—I loved it!
My Ratings: Better than Average / 4

Positive—Even though it did somewhat make fun of kids with handicap conditions, the movie was all around positive. The main character that goes into the Special Olympics turns out to be a positive experience. He find that these handicap kids are just the same as us, even though they may look different and talk different. They have feelings and are extremely bright. The movie shows that the kids care more about others than they care about themselves. They help one another out, even if it means losing something. I strongly suggest many people go see this movie and get a new opinion on special needs kids.
My Ratings: Average / 3

Ansley Randall, age 17
Positive—This was a very good movie. Much better than I heard. It was really funny, but not overly crude, nor did it make fun of mentally challenged people (in a mean way). It had a lot of positive moral messages, and it was surprisingly almost pro-christian. It had only a few sexual references and themes, no violence and a moderate amount of profanity. There was one f-word and a few other less offensive words used in humor. The main character, as well as many other characters, learned very valuable lessonsd in this hilarious movie. If you want a good, fairly clean, hilarious comedy, go see it.
My Ratings: Better than Average / 4

Tyler Smotherman, age 13
Positive—This was a very funny, sweet-hearted movie. I went into the movie thinking it was going to make fun of the mentally disabled; to my surprise it didn’t at all. This was a funny movie with a low amount of offensive material; it had one f-word, but might I add it is the funiest f-word I have ever heard. Go see this movie, I don’t think you will be dissapointed.
My Ratings: Better than Average / 3½

Klein Miltenberger, age 11
Positive—This movie was a must see. It was funny clean and overall a feel good movie. Johnny Knoxville at his best. The only bad things in it were:
1. 1 F-Word and 3 other swear words
2. 1-3 Sexual References.
That was it, pretty clean considering it was given a PG-13 rating.
My Ratings: Better than Average / 3½

D. Robbie, age 15
Neutral—This movie was pretty funny. I went with a couple of friends, and they all thought that it was hillarious. I thought it was all right, but until the end I felt a little bad about laughing at the jokes. The ending is sweet and tries to make you feel good about laughing at the handicapped. As a comedy, it was funny. I wouldn’t go if you don’t like slap stick humor though.
My Ratings: Offensive / 3½

Matt, age 16
Positive—This movie is better then I thought that it would be. …It was really funny, although when I finished the movie, I felt really bad for laughing at the mentally disabled. Johnny Knoxville did a very good job on this movie.
My Ratings: Good / 5