With the lead characters of this movie being tigers, it was difficult to wrangle them together for an interview. But, fortunately, I was able to meet with director Jean Claude Annaud and actor Guy Pearce.

I asked Jean Jacques Annaud if he was conscious of the theme of peace that seemed to pervade the story. Being very happy with this question he replied:

When I wrote that story, I didn’t think I was writing a story for a movie I would make. I didn’t know why I wrote that story.—Yes, I know why. I was on an island, with my family for Christmas, as we always do. And it was an island so remote, there was nothing to do in the evening. After six o’clock it was dark, so I went to the local marketplace and bought a little notebook and started writing a feel-good story for myself. Therefore I was in a very peaceful mood. It was Christmas, I was happy, and I was in that mood.

Now I left that little notebook of mine somewhere in my country place. It’s only after “Enemy at the Gates” (which I enjoyed very much enjoyed to do, but it was a very tough movie with a lot of explosions, dust, death, fire, blood) I felt like being in the forest again, in a climate of peace. And I wanted to see the green eyes of the tiger. And really, that was it. A sort of instinctive need of feeling brotherhood, peace, happiness.

And I’m very, very pleased that you felt that because it was not written, but that is how it was written. The context was very much that one. And I must tell you that we are all surprised—my crew, after living eight months away from friends, in a difficult country—we all came back in a different mood, with something smiling in our hearts.

Coming across as a more family-oriented / children’s movie, Jean Jacques addressed how kids might react to it.

I think most children identify very easily with animals, for the very reason that our world, full of words, is very difficult to comprehend for a child, while the body language of any animal is very easy.Tigers, young tigers, young brothers, are like them. Basically they have the same problems facing any kind of danger in life, any predators in life. And God knows we have predators in our society. That one of the happiest things is to be together, to be together with the people you belong to. So on that level I feel it can be a very heartwarming message. 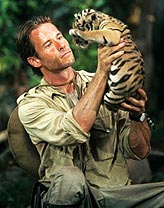 Actor Guy Pearce gave his impression of the film, both before, during and after its making.

I saw the film yesterday [for the first time] and it has a far more, sort of family-orientated feel. Very obvious family orientated spirit than what I detected when we were making the film, even though, when talking to Jean Jacques, he talked about reaching out to a really broad audience and treating the film with a sort of fable-like quality.

As his second animal-led movie, Jean Jacques explained he did not expect to do another movie like “The Bear.” Now with a second film based on man-eating animals, Jean Jacques describes his fascination.

I grew up with a dog. I was an only child. This is probably why I was so inclined to do a movie about brothers, because I’ve never had one. But I had a sister—my dog. I know that it is an important part of my early life. I have adored that animal. But, yet, when I am in front of the tiger, I’m thrilled. I’m in awe. I feel fear. And I know that is very instinctive, but I feel respect. And I like the idea of looking up at an animal, which I do with tigers.

And I also love the idea that when I cuddle those kitties that are so incredibly attractive—(I was on set kissing the little ones. I was ashamed in front of my unit to do so. But I couldn’t help because they’re just adorable.)—I knew both little things would become huge predators, extraordinar[ily] dangerous. And I was not looking at them the same way, and I liked that multi-layered feeling.

One of the appeals for Guy to do this film was the shooting schedule, which allowed him to intermittently fly back home to Australia to be with his wife. But the time he did spend in Cambodia proved to be eye-opening experience for him.

We were in Cambodia for five months.working with 250 French people.and working with tigers.I was also touring an incredible country that had such a history. The people of the place were some of the most engaging and enthusiastic people I had ever come across in my life. So just trying to put that together with the history that they’ve had was just really a mind-altering time, I think.

While Jean Jacques said that Guy had an exceptional gift to understand the animals, this did not absolve him from the fierceness of these creatures. Guy describes his own scary moment.

I went to this enclosure because I had the afternoon free. So I sat in the middle of the enclosure and all the tigers were in the different cages and sort of dotting around. And I was sort of watching them, and some were playing, patting up against the cage.and staying away from the adults. But there was one adult that was pacing, and so I went to have a look at it.and it just sort of stopped and looked at me. And then it roared at me.I was six feet away from it, and I just.like.I just kind of went into the ground. I just completely went, “Okay. [exhales] I have this real feeling that if I was out in the wild and one of them decided to do something to you, there’s nothing you can do about it.” Just to feel that energy, that strength.was incredible. And I learned more from that moment than the nine months I spent with them working.

But after cuddling the baby tigers both on and off camera, Guy addressed the temptation of wanting to take one of the little ones home. He said, “Whoever it is that created us all, made them be so adorable to us, made them be so engaging. So that desire to own that or possess that is really strong.”

Because of the obvious danger of working with these animals, Jean Jacques describes the lengths they went to in order to ensure safety for cast and crew.

We worked under very strict rules. It should never be forgotten that tigers are extremely dangerous animals. They are very seductive. They can charm you. They can be your friend. And they can love you until the day they love you for being a fool. [laughs] And, therefore, we took maximum precautions. We never, never allowed anyone to be in the compound, but inside cages.

He went on to tell just how they were able to shoot these wild animals.

I insisted to shoot the tigers the way I would shoot any star—meaning a lot of close-ups.the camera really a few inches from their throat, to get inside their eyes, inside their jaws. This is why my cameras were inches away—or remote controlled, as you can imagine.

On a few occasions my camera operator would beg me later to use the camera with a long lens and have contact with the flesh of the camera. So in those cages we were in heavy chicken wire. We would cut the chicken wire around the lens. But sometimes the window was a bit too big, and tigers like cages because they’re like a den, they like getting in. And every week we had the same thing—the tiger wanting to go inside. And we were petrified seeing the tiger go, “Can I come with you?”

Fortunately, we always had a trainer with a large piece of meat and say, “This is better meat.” [laughs]

Working with a total of thirty tigers for this project, Jean Jacques felt he faced most of his work and challenges during pre-production and was very pleased with the tigers’ performance.

The tigers did better than the storyboarding. I could not imagine that the animals would have so many expressions and reactions.they have such a variety of expression in their eyes and mouth. It was not a matter of being patient while shooting, but during researching. Process took a year and a half.

Conscious of not overstressing the animals, they would only work with them for a very short time on each shooting day. But, he says, “Everyday we had incredible moments.We were surprised that it went so easily.”

Read our REVIEW of “Two Brothers”