for sexual and drug references, thematic elements and language 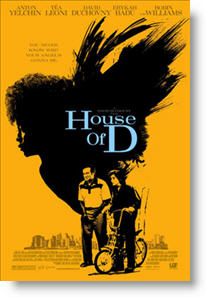 See the world a little differently / You never know who your angel’s gonna be.

“House of D” chronicles the events in the life of Tom Warshaw (Anton Yelchin), a thirteen-year-old boy who escapes from his life in Greenwich Village (New York) to a new life in Paris, France. Tom’s right of passage from a boy to manhood was marked with many life-changing experiences—friendships, first-love, the death of his parents, and his befriending of a criminal.

David Duchovny who wrote and directed this film, wrote the original script in six days, and already had most of the characters formed in his head since childhood. There are some biographical points of David’s life echoed in this movie. The portrayal and humor of the young Tom Warshaw coming of age is inundated with male sarcasm, which would be appreciated mostly by men. Many comedic phrases are repeated throughout this flick. It is typically—art imitating life! Men can often retell the same joke and still belt out the same jolt of laughter as if it was being told for the very first time.

On his son, Odell’s thirteenth birthday, forty-three year old Tommy (David Duchovny) recounts a secret to his wife regarding his life before Paris. While doing so, he rediscovers the importance of relationships, and how unpleasant circumstances resulted in his fate. In the end, with his wife’s coaxing, he returns to New York and reunites with those who once had a positive influence on his life. He becomes resolved to his need to start over so that he could move forward with his life.

In the recounting of his story, he begins with his mother played by Téa Leoni who portrays a distraught woman who misses her late husband. A year before this his father dies of cancer. His mother is unstable and has to take sedatives regularly in order to cope with her loss. Even in her pain, she is obsessed with her son’s scholarship and success. However, her world quickly fades! When her son is suspended from school after confessing to a burglary that he did not commit she overdoses.

His best friend, Papas (Robin Williams), is a mentally challenged older man with whom he shares a delivery route with for a local meat market. Their boss is a scantily dressed French woman who wears a crucifix, which dangles down to her cleavage. Thomas and Papas often refer to each other as Tom-ass and Pap-ass. Papas was also an assistant school janitor. And, the two of them were inseparable! They had a clever dialogue that included wordplay as in, “Who wrote the Yellow River? I. P. Daily” It was this manly repetitious exchange that kept them connected—it became their glue.

Adolescent antics run throughout this movie. Although sexuality is a part of the growing process, these experiences are definitely coming from the viewpoint of a teen, and expressed as such. Though most of young Tommy’s experiences mimic life, most parents will want to be prepared before permitting their young adolescents to view this flick. In one account, Thomas and Papas deliver meat to a beautiful young woman who is wearing a silky bathrobe, and her black change purse opens in the crevice of her crossed legs. She asks if they want their tip.

There is one distasteful scene while in Bible Study, which is now called ethics because of the separation of Church and State issue, the reverend reads from Genesis while the boys tear out their bible pages, crumble them, and then, throw the pages out the school window. Below the window is Papas, the assistant school janitor, who eats his lunch at a small wooden desk with a big smile. In the end, Papas uncrumples all the bible pages and keeps them in a suitcase for Tommy—his Baseball Bible.

Papas and Thomas are saving their tips in a metal tin under a manhole in front of the House of Detention for a “Green Lady”—a bicycle with a green banana seat. During their frequent trips, a female inmate (Bernadette) on the upper floor observes young Tommy using a broken piece of mirror. She befriends him so that he will buy her marijuana. He does not, but he quickly becomes captivated by her and frequently looks to her for advice because his own mother is detached from the real world and this “lady” (Erykah Badu) in the window becomes his surrogate. Nevertheless, ultimately she lies to Tommy about being a murderess, tells him that she never wants to see him again, and advises him to run. It was Bernadette’s decision to sever their relationship that catapulted him in to destiny.

Tommy’s world was closing in, with his mother in a coma and finding out that his best friend had the money they saved, Tommy needed a way out. He visited an old blind woman who was a regular customer and who conveniently had a bag of cash. He misrepresented himself as her long lost son, thereby, claiming he was in trouble and in need of money. She obliged. He found the necessary funding for his escape and Papas assisted him in playing the dad role so that he could execute the escape plan at the airport.

It was a heart-wrenching goodbye. Tommy left never turning back. Until of course, Tommy reveals his secret thirty years later. He returns to New York and visits Bernadette, Papas, and the graves of his parents. It was a necessary visit because it revealed that change is inevitable in life, and that sometimes we must return to places we often would rather forget before we can move forward successfully.

When Tommy visits Bernadette, he leaves the gift of a mirror. The symbolism is not only reflected in the fact that she used a mirror to view him from a top floor at House of Detention, but it also symbolizes that our past as well as our present makes us who we are, and we should never be ashamed of it or keep it a secret. Even though Tommy had escaped his previous life to another life in Paris, he was not truly free until he revealed that life in New York to those he loved.

Secrets keep us bound, therefore, keeping us from moving forward successfully with an acceptance of ourselves as a whole, not in part.

Movie Critics
…succeeds despite some shaky ground …tells a charming story, and Duchovny shows promise as a writer and director…

John Hayes, Pittsburgh Post-Gazette
…What should be a 10-minute anecdote turns into a sluggish and overly sentimental tale that won’t hold the interest of anyone outside Duchovny’s immediate family…

Roger Ebert, Chicago Sun-Times
…A sweet tale with too much Robin Williams… almost works as a melancholy look back at the line between gawky teenager and a timid adult…