for language, sexual situations, and some thematic material including partying 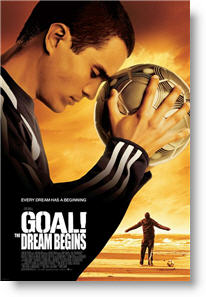 “Every Dream Has A Beginning”

Disney has a long history of trying to push our buttons. I still remember the first time that I saw “Bambi” and “Old Yeller”. I was very young and deeply impressionable. Yes, there have been a number of films in the past designed to bring out our emotions and bathe us in the latest treatment of “warm fuzzes”.

Now Disney is pushing a different set of buttons. This time the back-story is about illegal immigration, or is it about just immigrants or undocumented workers. Goal! is an oddly timed piece of social commentary, opening as it does with Santiago and his father slipping across the border, illegally, to start a new life in the U.S. The family’s illegal status comes up a few times, and seeing as how Dad and grandma are a bit militant about speaking Spanish over English, Disney could have had a hot-button issue flick on its hands.

Our new formula blend does still have the predictable Disney ingredients. We have a father that does not believe in his son’s dreams. We have the grandma that rescues a boy from East LA gangs and believes in his dreams. You also have plenty of the rags-to-riches Rocky style hopes. This time the studios hope that soccer can be a strong enough audience magnet to bring the kids and the soccer moms into the theaters. After all, our story is already designed as a franchise trilog.

Now if you are reading this review before you race off to the theater or give your son and daughter permission to head off to the mall with their friends… I will give you a quick summary of the objectionable content. Do not let the PG rating fool you into thoughtless acceptance. There is plenty of offensive language and the f-word mouthed. I’m SO glad that they didn’t say the word. Don’t you just hate covering up your children’s ears during a PG Disney film? There are also several other colorful expletives and disrespectful name-calling. Yes! Disney will not let you down as it offers to nurture those young and impressionable attitudes. Don’t worry they will be too busy following the bouncing soccer ball to notice. They probably won’t notice the implied sex as you only see the couples in bed. I’m sure the young male soccer fans will barely notice the tiny bikinis on the well-proportioned women. Relax! It’s Disney! Its PG. Let’s not forget several scenes that include the use of alcohol. What are a few references to clubbing, or bars, or drinking at sporting events? I think you get the idea. Disney not only will try to push your buttons, but they also try to push the boundaries of the PG rating. Let’s be honest! Can you blame them? We certainly can’t expect the PG-13 borders to become more offensive and leave the G and PG alone! It just wouldn’t be fair. Just like there may be jobs that Americans refuse to do, we should have movies for those without discernment to watch. I will pause while you encourage your children to do something else with their time and your money.

Here is the story. We have a Santiago (Kuno Becker, who is the kid here illegally with his father (Tony Plana) and he dreams of playing soccer. His dad is trying to establish and run a lawn care business. I will give props to Kuno. He is a wonderful actor to watch and fits this story well. Our kid is so poor that he wears cardboard shin protectors. Miriam Colon plays the supportive grandmother that can buy that ticket for your dreams. Her ticket has fairy dust on it and illegals don’t seem to need identification or a passport to travel out of the country. It’s a good thing because Santiago’s mean Disney dad takes all his Chinese busboy money and buys a pickup truck. A former soccer player and professional scout discover Santiago. That’s right boys and girls; Lady Luck lives in the U.S. Santiago must however overcome other obstacles to reach his dream. He is from LA and used to playing in the U.S. sunshine. He makes it to England and gets a shot a trying out for the famous Newcastle United soccer team. Here comes another dose of “underdog magic”. The problem is that this field is soggy and muddy. Santiago’s first tryout does not go so well. I will pause again while you push back that tear. He meets a beautiful Irish nurse and soon our poor kid from East LA is back in the game.

There are some touching and heartwarming moments in the film. You can admire ambition. You feel for the impoverished struggling in America. We all enjoy rooting for the underdog. It worked well in the movie “The Rookie”. The sport shots are just above average. The direction isn’t too bad. My advice is to skip this one and tell Disney you want to see more films like “…Narnia…”. We’re not buying your recycled spoiled formula.

Positive
Positive—I love soccer, and I love the movie! The actors were great, the story was great and inspiring, it teaches you not to give up on your dreams, and Santiago is a good kid, he even dislikes partying, he rather conentrates on soccer, you’ll end up almost crying at the end, 'cause you feel the joy that Santiago feels when he makes it big in England, and he prays and believes and thanks God. I recommend it 100%…
My Ratings: Good / 5

Enrique, age 31
Positive—This great movie has a tame rating, but it was made for anyone over the age of 12. The very best part about the movie is the portrayal of how good morals win in the end. Santiago shows that morals, hard work, dedication, and choosing the right friends will help you reach your goals. The movie isn’t perfect but it is very enjoyable. I would recommend this movie to anyone who is a teenager or older, but especially those of us who are between the ages of 18 and 25.
My Ratings: Better than Average / 4

Brendan, age 19
Positive—…While not a great movie—it was enjoyable. It is not on the level of “The Rookie” or “Remember the Titans”, but if you like soccer you should enjoy the movie. My 13 year old son loved it.
My Ratings: Average / 3

Bruce, age 46
Positive—I went to see this movie with my 11 year old soccer playing son. I had heard absolutely nothing about it, and I was prepared to sit through another ho-hum cliche-ridden movie. I still can’t believe how great this film is! It was very exciting with a great message. …Sure, there were the usual poor-kid-makes-it-big cliches. But the movie was so well done, I hardly minded. Our hero, Santiago, is befriended by the superstar of the English team, Gavin. Gavin takes Santiago out clubbing, an activity whose shallowness Santiago quickly tires of. When he tries to put Gavin on the straight path, Gavin reacts by kicking him out of his apartment. Without giving much away, Santiago never really reconciles with his father. Yet the love and respect he feels for his father, despite his father’s lack of support, is quite apparent. The soccer game sequences are great. Big name soccer players made numerous cameos (Beckham, for instance). I am recommending that everyone of my son’s soccer team watch this movie due to it’s inspirational value (in terms of soccer, that is). The best part I found out later: this is part one of a trilogy, the second of which is due out sometime later this year. …
My Ratings: Average / 5

Guy, age 47
Positive—I just watched this, and I am not into soccer at all, and I absolutely loved it. It kept me on the edge of my seat and rooting for Santi all the way. I’ll probably get into soccer now.
My Ratings: Good / 4½