How to Eat Fried Worms

for mild bullying and some crude humor 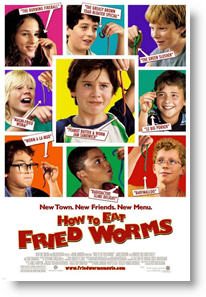 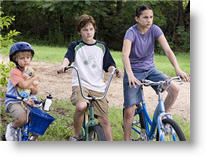 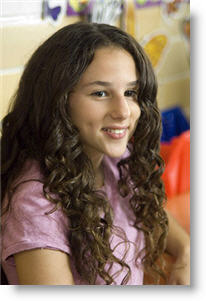 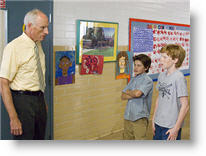 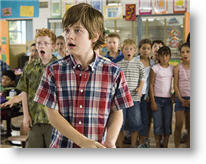 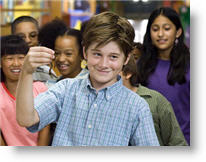 Worms in the Bible

Animals of the Bible

From the producers of “Narnia” comes a delightful film the whole family can see and discuss. Based on Thomas Rockwell’s beloved book (over three million copies sold), Rockwell is the son of famous artist Norman Rockwell. Poor Billy (Luke Benward—“Because of Winn Dixie”) is the new kid at school who tries to fit in by accepting a bet with the school bully. Billy must eat 10 worms in one day or pay the humiliating consequences. What follows is often hilarious, and I laughed out loud many times.

The movie deals with bullying, but also shows how to be a good friend like Erica (Hallie Kate Eisenberg—“Paulie”). Instead of appearing to be a likeable buffoon as is often portrayed in film, the father (Tom Cavenaugh—“Ed”) is perceptive and kind.

Just a word of caution: if your child tends to mimic things he sees on film, you may want to be proactive and talk to him about eating worms before taking him to see this movie. I can see some kids eating worms afterward, or daring other kids to do so. Also, after the movie there is a disclaimer that no worms were harmed in the making of the film, but they do show worms being fried, microwaved, smashed, and blended. Some younger children may not understand the ramifications of microwaving live animals.

There are many “teachable moments” in this movie: how to not make wild claims about things you may not be able to back up when challenged, how to speak kindly to others, how to understand a bully, and how to treat live animals humanely. Even though this film will appeal to kids, I can’t think of an adult who wouldn’t enjoy it as well.

Positive
Positive—This movie was great!! The overall message is “The Golden Rule” do unto others as you would have them do unto you.
My Ratings: Good / 1

Donna Wright, age 43
Positive—I took my kids to see this movie. It was a pleasant and different movie. It was a little difficult to try to eat popcorn while watching this movie, due to all of the worm-eating. But overall, it is one of those rare movies that has a positive message. I would recommend this cute movie to a younger crowd, and parents should feel comfortable letting their kids watch…
My Ratings: Excellent! / 3

Scott Stevens, age 38
Positive—My wife and I took our three girls ages 8, 6, and 4 to this film and it held them captive the whole time. I was not sure how a movie about eating worms would go over with girls, but they loved it! Having grown up in a family that moved many times, where I had to start at new schools, I could relate to the boy’s difficulty in being at a new school trying to make friends and how peer pressure is very real, even in the 5th grade. The way they showed bullying and its effects, especially in how the bully got bullied himself at home by his older sibling, was good. Yes, some of the worm scenes were a little gross, but the way it displayed kids at that age and the natural way the kids acted was impressive to me. Pleasantly surprised!
My Ratings: Good / 3

Jon Clark, age 36
Positive— I watched this 2006 film, and thought it was decent; it reminded me of my childhood, growing up in Woodhaven, Queens, New York City, and how in June of 1991, when I was 11 years of age in the 5th grade, on a Saturday Morning I watched the 1985 CBS Storybreak Special “How to Eat Fried Worms” with Bob Keeshan, the CBS Storybreak Special was based on the 1973 book of the same name by Thomas Rockwell, and the book took place in August of 1973 in the fictional town of Gratton, New York, not far from New York City. Many have said the CBS Storybreak Special which is viewable in full for free on YouTube, was better than this 2006 film, but it’s a matter of opinion, this movie and CBS Storybreak Special makes me wish for simpler times, and for a World Without Suffering.
My Ratings: Moral rating: Average / Moviemaking quality: 3

Jeff Andrew Winters, age 40 (USA)
Negative
Negative—I find the whole concept of eating worms disgusting, in the extreme, so it was hard to sit through. My son seemed to like the film though.
My Ratings: Better than Average / 3

Thomas Dinan, age 49
Comments from young people
Positive—Ok, I’m going to level with you here. I didn’t think this movie would be good at all. But my mom was going anyway, so I went along for the ride. I was pleasantly surprised. How To Eat Fried Worms, is a movie that everyone will enjoy, age 9 or age 90. It is funny, and will make you laugh out loud more than once. (I think the people around us were about to call the manager of the theater, we were laughing so hard.) I would recommend this movie to anyone, and if you decide to go, you will not walk out of the theater disappointed.
My Ratings: Good / 5

Anna, age 15
Positive—This movie was very accurate to school. It showed how a new kid like the one in the movie wanted to be liked so bad he agreed to a dare to eat ten worms. There are many good points in the film like bullies and they showed a girl who was very tall in her class and showed how the other students made fun of her even though she was caring and sweet. I always thought this issue was important because I have felt people at my school tease me because I was the tallest girl, so I was very happy to see some truth in the movie. During the movie the bully slowly loses his fiends one by one because they begin to see that he isn’t a real friend. There is a lot of humor in many scenes that made me laugh a lot. Toward the end Erica tries to help the boy they are making dares with, but he calls her a name because he is so frustrated, later he makes up but it wasn’t a very sincere apology to me. This movie has good points and bad ones but, overall, it’s a good movie, Just make sure you always tell your children after this movie that they should NEVER make dares because they can lead to disaster—which this movie shows.
My Ratings: Good / 3

Holly, age 12
Positive—I went and saw this with my little sister, and just loved it! I think it had good values, and it was clean, Hollywood doesn’t make those kind of movies anymore! It was hilarious, and it showed how kindness = friends!
My Ratings: Good / 5

Brittany, age 13
Positive—I loved this movie. I thought that it was really cute, and I wasn’t bored one moment of it. Great job!
My Ratings: Good / 5

Bethany Southard, age 14
Neutral—“How to Eat Fried Worms” is an extremely clean film. I can’t see that there is anything questionable about it. On the other hand, it wasn’t the best peice of filmaking. It was alright and is suitable for a family movie night on which you can’t find anything else to rent. It was pretty good.
My Ratings: Excellent! / 2½