for some language and sexual humor 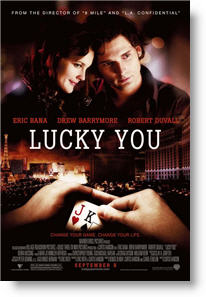 “Lucky You” was initially scheduled for theatrical release in September of 2006 before being pushed back to March 2007 and then finally to May 2007. Because multiple release delays can sometimes be caused by bad responses from test audiences and because the film was eventually dumped on the same opening weekend as “Spider-Man 3,” I didn’t have much confidence that the film would be a winner. Still, Curtis Hanson directed “L.A. Confidential,” “8 Mile,” and (more recently) “In Her Shoes,” and “Lucky You” features a cast including Robert Duvall, Eric Bana, and Drew Barrymore (solid talents all), so maybe, I thought, the delays were due to production issues rather than the film being a turkey.

The film’s not a turkey, exactly, but it isn’t a winner, either. It is a strange pastiche of romantic comedy, sports film, and family melodrama. Eric Bana plays Huck Cheever, the son of a two-time world champion poker player (Robert Duvall) who tells him that he plays cards like he should live his life (reckless, by the gut) and lives his life the way he should play cards (never getting overcommitted). Much of the first half of the film is about Huck’s attempt to raise a $10,000 stake to play in the World Series of Poker while trying to convince Billie (Drew Barrymore), a fresh off the bus transplant to Las Vegas, and himself that he is not the heartless jerk his father is. If I tell you that most of the second half of the film revolves around the tournament itself, will that constitute a spoiler for the first half? One doesn’t need to be a professional card player to calculate the odds that Huck and pops are going to end up at the tournament’s final table together.

Is poker still red hot or has the craze officially abated? If anything, “Lucky You” has been hurt by the recent boom of popularity surrounding poker. Some of Hanson’s best films have a strain of anthropological investigation in them. The story in “8 Mile,” like that in “Lucky You,” climaxes in a big competition, but while the former used the scenes in between the various rounds of competition to explore a world the audience might not know, the latter simply cuts back and forth between rounds of poker and a pedestrian romance. In addition, the performance aspect of the rapping in “8 Mile” is itself visually interesting, but there is nothing inherently visually dramatic about people sitting at a table flipping over cards. Whatever drama there is comes from the context—what winning and losing mean to the people playing and how invested we are in them. Since anyone who is even remotely interested in the culture portrayed has had ample opportunity to see poker explained, displayed or deconstructed on television specials and other films (most notably “Rounders”), the parts about the world and the lifestyle aren’t enough to carry the film.

Neither is the romance. Bana is pretty, with his flowing hair and smoldering anger (which nurses a deep, lonely hurt that only the love of a good woman could possibly heal—if he doesn’t push her away first). Barrymore slips in and out of a Forrest Gump-like innocence so quickly that it is hard to tell whether she really believes she can change this guy she just met, knows that she can’t but is in love with him anyway, or is just a dolt. Duvall comes off the best of the three principals but only because he has the least to work with and so can rely on his celebrity persona to fill in between the (very) broad strokes with which his character is drawn.

“Lucky You” is a PG-13 rated movie set in Las Vegas—an imaginary, movie Las Vegas where people lose thousands of dollars over breakfast but rarely curse, where gangsters rough you up by throwing you (and your lawn chair) into an empty pool and issuing you a stern warning, and young women from Bakersfield fall into bed with guys they just met but get all huffy and say “I’m not that kind of a girl” when asked to shave a few seconds off the stopwatch to help someone win a bet. The most prominent breasts on display are those belonging to a male acquaintance of Huck’s who has had surgical implants in order to win a bet. Hilarious, huh?

“Lucky You” is not a horrible film, but it can’t really decide what it wants to be. It is too much about cards to interest anyone not enthralled by poker, and too slipshod about cards (and the personalities drawn to it) to satisfy those who are interested in poker.

Neutral—I had looked forward to this movie since I first saw the trailer last fall. I like Drew Barrymore, Eric Bana and Robert Duvall, so figured even though it got low ratings, it would be worth watching… and it was. Was it spectacular? No. Entertaining enough to go see at a matinee (or rent on DVD)? Yes. Definitely cleaner than most movies out there—minimal language, no nudity, etc., but shallow character development and highly predictable. You decide.
My Ratings: Average / 2

ScreenIt
…the film fails its one major challenge: to give life to so many scenes of men—and an occasional woman—sitting at tables, glaring at each other’s faces and peeking at cards in a mental game of bluff. These scenes are absolutely lifeless.

Kirk Honeycutt, The Hollywood Reporter
…ays all the wrong cards on the table… at an exhausting 125 minutes, it’s a drawn-out wait for a bad result…

Garrett Conti, Pittsburgh Tribune-Review
…There’s way too much poker in this movie. … this movie has so little to it that you begin to understand why they packed it with so much poker: They had to put something on the screen.