for some intense action violence and a scene of sensuality 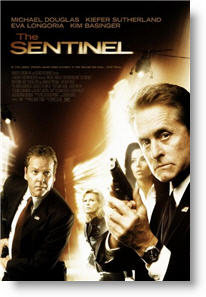 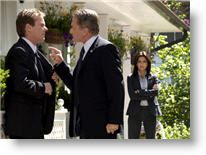 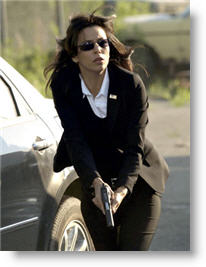 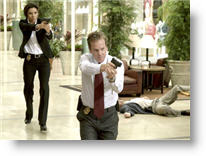 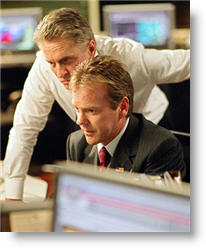 “In 141 years, there’s never been a traitor in the Secret Service… Until Now.”

At a time when it seems that every thriller, comedy, and animated movie coming out of Hollywood is trying to make a political statement, “The Sentinel” is a welcome relief from the tedium of listening to third-rate activism disguised as filmmaking.

“The Sentinel” is a standard genre film whose star casting and predictable villains (Russians!) seems determined to offend no one and to make lots of money. Michael Douglas plays a Secret Service agent who gets tangled up in plots of his own and of other’s making. Kiefer Sutherland reprises his Jack Bauer role as an intense investigator who spends half the movie pointing his Glock off-camera. And Eva Longoria (of “Desperate Housewives” fame) does what she can with a vacuous role that calls for a little cleavage and even less acting as Sutherland’s assistant.

The major criticism of the movie is that it is implausible and that the characters lack emotional depth. This is true and also besides the point. “The Sentinel” is a genre move which means that it’s about plot, not character, and it’s the plot which entertains. Clark Johnson, who has done episodes of “The West Wing”, “Law and Order”, “The Shield”, and “S.W.A.T.” does a good job of keeping the action in motion from beginning to end. He also does a Hitchcock-like turn as the agent who gets murdered.

The inconsistencies in the plot have to do with certain chase sequences, while an inadequate explanation of the relationships between the President and the First Lady (Kim Basinger), between Douglas and the First Lady, and between Douglas and Sutherland leave the audience wondering… but not much. To paraphrase the English author Samuel Johnson, if you’re willing to believe that you’re actually watching ancient Romans speaking to one another on a stage, minor inconsistencies in time and space shouldn’t bother you.

The movie has a few lukewarm political references, as when a protester gets valuable face-time for signs which read “PEACE” and “No New Wars,” but such moments are only half-hearted attempts at proclaiming the movie’s innocuous liberalism. At one point, Douglas’s character smiles affectionately at a photograph of himself and Bill Clinton. Consequently, that moment more accurately defines the film’s political orientation because of the President’s endorsement of the Kyoto accord and the subsequent revelation of adultery in the White House.

Portraying the would-be assassins as Russians makes the movie seem like a remake of a 1970s movie—so 20th century that it defies belief. In an age of Islamic terrorism, Hollywood continues to ignore the violence in the news and whistles past the spectacle of its own glaring irrelevance. This fact, more than any other, is what makes the movie seem strangely detached from reality. A movie about terrorists trying to assassinate the President of the United States can only seem plausible if the terrorists are plausible. But to cast ex-KGB agents as the heavies is about as realistic as casting the Nazis or the Mafia; it’s ridiculously anachronistic.

Aside from a few profanities and the painful spectacle of Michael Douglas passionately kissing Kim Basinger, “The Sentinel” is a mildly entertaining movie whose greatest virtue is its fair-minded unwillingness to gratuitously offend either Republicans or Christians for which, I suppose, we should be grateful.

Positive—If you like the series “24” you’ll probably like this. My only complaint is that they use Jesus name too many times. The plot is good, the action is good, everything was well done except the language.
My Ratings: Good / 5

Scott, age 32
Positive—Overall, this was a greatly entertaining movie! Although the whole idea may be slightly unrealistic, you don’t even think about that while you are watching it. I was on the edge of my seat practically the entire movie. I wasn’t sure how great it would be considering the star of “Desperate Housewives” was one of the stars, but Eva L. did a really good job as a Secret Service Agent. The whole cast did a really good job.

As far as being a Christian and watching it, I was actually fairly pleased. There were unnecessary uses of G** D*** in the movie (around 5 or thereabout), but besides that, there was not very much objectional material in the movie. The first scene with Eva L. showed some cleavage, but her partner told her to put some clothes on and she did!!! (AMAZING!) I put this movie in my top 10, and I will most defenitely watch it again!
My Ratings: Better than Average / 5

Amanda Nelson, age 21
Comments from young people
Positive—A main plot of the movie revolves around a “sensual” theme involving an affair; it’s intense, and there is some profanity, but read the rating. You’re going to a PG-13 movie, and this is a pretty clean one. I didn’t find it offensive. I really enjoyed it. Personally, being a huge “24” fan, (I didn’t find it as good as “24”, but wasn’t expecting it to be, either); thought it could’ve used more Kiefer. Michael hogged the screen, but I really got into it. …It’s not “24”, and it’s not trying to be “24”. The major criticism of the movie is that it is implausible and that the characters lack emotional depth. This is true and also besides the point.' Exactly. Another main criticism is that it’s predictable. This is also true and besides the point. This is a really good movie. It’s not extreamly deep or Christian or anything, but it’s enjoyable. I give it a 8½/10
My Ratings: Better than Average / 4

Hannah, age 15
Neutral—The movie was okay. Not particularly exceptional, but fun to watch once. It was interesting and fast paced. Fine for it’s genre, but I wouldn’t say its a 'must see.'
My Ratings: Average / 3

Rebekah, age 17
Negative—I would only tell a person to go see this movie if they like to hear every cuss word! Find out that the star in the movie has an affair with another secert angents wife and is not sorry about it in the least! And asks her to lie about it! And second, that he has an affair with the commander in chief’s wife and shows them kissing and other offensive things! And he’s only sorry when he gets caught! The story line is very poor! If you are a fan of “24”, one episode of it could beat this whole movie! There are also a ton of loose ends in the movie, too! Bottom line don’t waste your time or money on this bad movie!
My Ratings: Extremely Offensive / 3

Hannah, age 17
Positive—…a mediocre movie that probably would’ve been better off forgotten by the film makers.
My Ratings: Average / 2