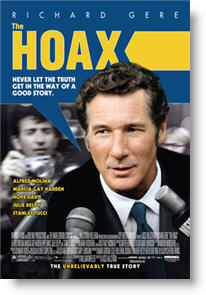 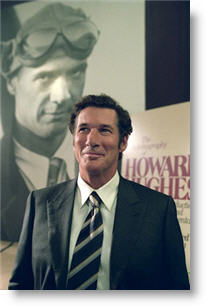 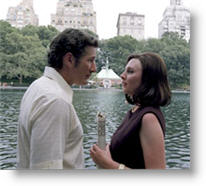 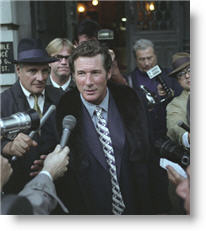 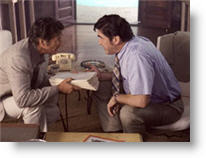 “Never let the truth get in the way of a good story.”

Why do people lie?

Avoiding punishment is the most common reason, says Paul Ekman, a University of California, San Francisco, psychiatry professor who has studied lying for three decades. He’s talking about serious lies—the kind that could get you in big trouble.

Mark Kendall of The Press-Enterprise notes that the flip side of lying is for fun or to keep the truth from someone to fend off being embarrassed—but he warns the worst kind of lie is to lie for gain, money, power and approval.

There are many manuscripts written on lying and why it might be okay, such as most people’s idea of the “little white lie,” that they deem could not really hurt anybody, to the gigantic lies that Clifford Irving, our subject in point in the new DVD release “The Hoax” perpetrated for money and fame.

We may sift through a kazillion pages about lying and it’s pros and cons, or search the Internet for days, but there is really only one Book that will give us the TRUTH about LIES, and that is The Bible.

“A trustworthy witness will not lie, but a false witness utters lies.”
—Proverbs 14:5

“If you have bitter jealousy and selfish ambition in your heart, do not be arrogant and so lie against the truth.”
—James 3:14

“Truthful lips will be established forever, but a lying tongue is only for a moment.”
—Proverbs 12:19

I couldn’t help thinking about these verses and what our Lord has published in His Word while watching this very entertaining, but hard to handle movie. The fact that it is a true story touched me deeply, as the characters could have chosen to do otherwise. Clifford Irving, his friend Dick and his wife Edith might have chosen to do what would be right, but instead allowed themselves to get caught up in the evil deeds that snare many of us into thinking we can lie and deceive yet somehow escape punishment.

Richard Gere is wonderfully charismatic as Clifford Irving, the shyster who tricked the literary and journalism worlds in the 1970s into believing he penned Howard Hughes’ “authorized autobiography.” They in 1971 published this supposed Autobiography of Howard Hughes.

The singular problem to his stunning research and gripping rendition is that Irving made it all up.

And not only that, but he truly believed he could get away with it.

What any viewer unfamiliar with history, or too young to remember the atmosphere of the early 70s, I must note here that people were fascinated with Howard Hughes, and his oddball behavior—flitting about like a spy, reportedly making strange demands to ensure the sterility of the places where he stayed and so on—this type of behavior only increased the public’s interest in him, much like how Michael Jackson had us all bewildered in the 80s. So, when Irving announced that he was working with Hughes on a book, there was a resounding amount of interest, especially from publishers who saw dollar signs in their future.

Irving, despite once writing a book called Fake about a famed art forger, and despite having no perceivable connection to the reclusive billionaire, convinced his publisher, McGraw-Hill, and the world that he had conducted a series of exclusive, secretive interviews with Hughes. Suspicions were pushed aside because of Irving’s thorough research, skillful forging of letters, and careful attention to detail in his writing. He received a huge (million dollar) advance on the book and took part in a media parade as the book neared completion, only to have the entire scam and his life tragically come apart in the end.

The movie assumes he probably would have pulled it off had it not been that the elusive billionaire Howard Hughes refuted the book himself via speaker phone on national television. His last public utterance, by the way.

And if that weren’t enough, Irving commits adultery on his wife Edith (Marcia Gay Harden) more than once with an old flame and gets his best friend and co-author, Dick Suskind (Alfred Molina) drunk, then pays a hooker to sleep with him in order to blackmail Suskind into staying with him and his lies until the bitter end.

I can’t say enough for the heart wrenching and believable performance of Alfred Molina as a man who dearly loves his wife and family, and was lured into a sordid evening of lust by drinking. His portrayal of a human being who has done something he can never take back, is a perfect example of one who has hit the bottom of sorrow and guilt. Too bad his character never knew that profession of a belief in Jesus could take it all away, wash him white as snow and give him renewed hope.

Clifford Irving makes fraud, forgery and grand larceny seem as fun and consequence-less as slipping down a water slide on a carefree summer’s day. No doubt director Lasse Hallström (“What’s Eating Gilbert Grape,” “My Life as a Dog”) wants us all to get sucked in, only to find that in the end we can never escape the pain that follows what such victimization and dishonesty inflicts. At least it is my hope his intention was to let us see how easy it is to get caught up and even feel a connection to the Irving character, as his friends and family did in real life—all winding up in prison for it.

The reality of it is that no one can escape the lies he has woven.

The film is based on a book of the same title Irving wrote about the events which imaginatively explores the alleged connection between Irving’s meticulously researched but frequently conjectural tome, Hughes’ eventual quasi-complicity in the project—in a plan of grudge-settling and payback that would still allow for plausible deniability—and the burgeoning paranoia in the Nixon White House that would eventually lead to Watergate and the downfall of President Richard Nixon.

The author is credited as a technical consultant but has publicly said he had little to do with the making of the film. Not that he should mind all that much. Thanks to the movie, his book has garnered a re-release.

“The Hoax” is rated R with justification, as it has drinking, smoking, adultery. Although no nudity and not too many real swear words the F-word is uttered once. It is definitely an adult film, and I advise no one under the age of 17 to view it.

Parents should know that this is a movie about a massive fraud, and many of its characters are unabashed liars and cheats with no consideration for the people whose lives and reputations they are damaging. Characters drink and smoke and use strong language. There are sexual references and non-explicit situations, including adultery and prostitution. And there are tense and emotional confrontations and betrayals. (Movie Mom).

Clifford Irving, the main character, had affairs and lied about them, he spent more than he had, and he was something of a fabulist, drawn to things and people that thrust him his friends and family into eventual ruin. All spent time in prison for his acts of fraud and his lust for money and fame.

There are two very educational special features on the DVD which parents might find of historical value for their older teens. Which are the making-of feature and “Mike Wallace: ‘Reflections on A Con.’”

In conclusion, we should learn from Mr. Irving’s example and hold fast to what Scripture finally tells us:

“A false witness will not go unpunished, and he who tells lies will not escape.”
—Proverbs 19:5

Neutral—A fine ensemble of actors pulled off this true story about Clifford Irving and his effort to pass off a book about Howard Hughes as a work commissioned and authorized by Hughes himself. The information in this movie was interesting. I promptly looked up this event on the Internet. The moral of the story, however, was a little fuzzy for me, because Clifford and his partner in grand larceny, Dick Suttkind, are presented as sympathetic people, flawed and weak, yet likeable. This can often work, and certainly we all sin and fall short of the glory of God. But in this movie it just didn’t work for me. I should have been more impressed, considering that the subject matter was presented fairly clearly and the acting was good. Maybe it’s because the topic is so despicable—the pathetic, enormous greed, the extreme deception, the glorification of really sleazy behavior, and the equally greedy gullibility of the poor fools who fell for the scheme.
My Ratings: Average / 4

ScreenIt
…this movie… is both appealing and appalling… ‘Hoax’ is a solid movie, entertaining and persuasive, with cast and crew at the top of their form, but it is also a disturbing experience as we witness the fulfillment of the truism, “Be sure your sins will find you out.

Richard James Havis, The Hollywood Reporter
…Richard Gere makes Irving an engaging rogue… What it amounts to is a giggling gallop through one of our gullible culture’s more gullible eras…