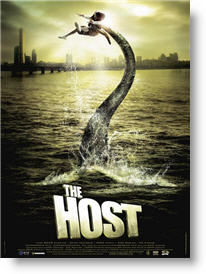 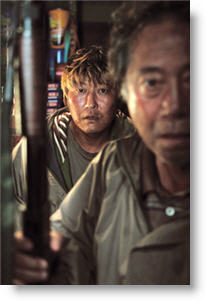 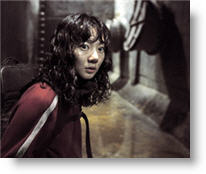 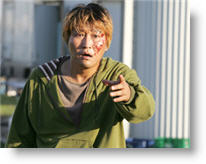 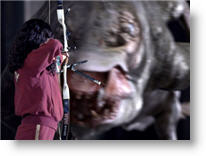 A great sea creature of the Bible: Leviathan

“Man has made his newest predator”

Here’s what the distributor says about their film: “The talk of the 2006 Cannes International Film Festival, ‘The Host,’ the latest film from critically acclaimed visionary director Bong Joon-ho, has already garnered a substantial amount of international buzz. Utilizing state-of-the-art special effects courtesy of a creative partnership between Weta Workshop (‘King Kong,’ ‘The Lord of the Rings’) and The Orphanage (‘Harry Potter and the Goblet of Fire,’ ‘Sin City’), ‘The Host’ is equal parts creature-feature thrill ride and poignant human drama.

Gang-du (Song Kang-ho) works at a food-stand on the banks of the Han River. Dozing on the job, he is awakened by his daughter, Hyun-seo (Ah-sung Ko), who is angry with him for missing a teacher-parent meeting at school. As Gang-du walks out to the riverbank with a delivery, he notices that a large crowd of people has gathered, taking pictures and talking about something hanging from the Han River Bridge. The otherwise idyllic landscape turns suddenly to bedlam when a terrifying creature climbs up onto the riverbank and begins to crush and eat people. Gang-du and his daughter run for their lives but suddenly the thing grabs Hyun-seo and disappears back into the river.

The government announces that the thing apparently is the Host of an unidentified virus. Having feared the worst, Gang-du receives a phone call from his daughter who is frightened, but very much alive. Gang-du makes plans to infiltrate the forbidden zone near the Han River to rescue his daughter from the clutches of the horrifying Host…”

Positive
Positive—Fun stuff. Its a monster movie that doesn’t resort to gore for its thrills. Not to say that it’s a boring movie with nothing hapening, but I wouldn’t call it scary. It’s a monster movie with a sense of humor, well worth the money, and it didn’t leave me disappointed in any aspect
My Ratings: Average / 4½

Daniel Robison, age 18
Negative
Negative—While I had high hopes based off of other reviews I had read, this movie is one that clearly belongs on Mystery Science Theatre 3000 being ridiculed by Mike and the 'Bots. There is some creativity in the design of the creature, but—in light of today’s CGI technology—it was not exceptionally well constructed, at times looking like an actor in a suit about to face-off with Godzilla.In fact, if this had been an old Godzilla movie, then at least the cheesy acting (and terribly done dubbing) would have been expected and one might get a good laugh out of it. The acting was wooden, especially when trying to generate strong emotions over the deaths and kidnappings the monster was engaged in.

There was some swearing that, once again, was wooden and misplaced, almost as if it was an afterthought of the director and dubbers who said, “We’d better have a few swear words in this thing.” There is one scene where the main actor has his hand inside his pants—to essentially no point at all, and the rest of his family… well, let’s just say you shouldn’t expect too much. The only likeable characters are the Dad, the little girl, and the little boy. The Dad, well he’s not there for the whole movie, let’s just say. And the little girl is probably the best actor in the movie, which endears you to her and her efforts to save herself and the little boy who has been thrust into her care (This is perhaps the one redeeming Christian theme: She doesn’t just try to save herself but looks after the boy as well. Her father also is willing to do anything to save his daughter’s life).

At then end, you have only two hopes: 1) That the movie is actually over; and 2) That the little girl survived. Let me leave you with only hope #1. To buy this movie or perhaps even to rent it is probably being a bad steward of the money God has entrusted you with.
My Ratings: Average / 1

John T. Woolf, age 38
Comments from young people
Positive—I love a good monster-movie, JAWS and ALIEN (1-3); but the only problem is that most monster movies to come out nowadays are those piece of trash films on Sci-Fi channel at around 12AM through dawn. Here is a monster movie that refuses to receive such treatment! THE HOST is a fun, entertaining and often silly (in about two ways) monster movie from KOREA that is actually, unlike many PG-13 movies released, is relatively clean. The violence is low key and the sexual content is non-existent, the only problem (and the reason the movie received an R-rating) is because of the language; 13 f-words, 4 s-words, 2 uses of the word @$$ and multiple other minor obscenities including 8 religious exclamations and profanities. This is really unfortunate because other then that (and some rather poor CGI in a couple of places) this movie is excellent! I suggest this movie to anyone who can take the language and wants to watch a good, well-made monster movie that is extremely entertaining and fun to watch.
My Ratings: Offensive / 4½