for some violence, and sexual content including partial nudity 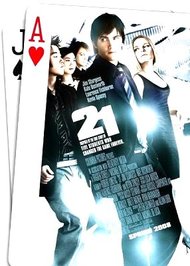 Does the Bible share any wisdom about investing? Answer

How can I decide whether a particular activitysuch as smoking, gambling, etc.—is wrong? Answer

“Inspired by the true story of five students who changed the game forever.”

This story is based on the book Bringing Down the House: The Inside Story of Six M.I.T. Students Who Took Vegas for Millions. I was very interested in this movie and heard it was decent and suspenseful. MIT senior Ben Campbell (Jim Sturgess) has worked hard all his life with a goal of attending Harvard Medical School. Getting in isn’t the problem—he’s already been accepted—but paying for it is. He is a brilliant student and very likeable. He has two friends that are very close that seem to love the simpler things of life. Ben is the honest, hardworking, innocent boy next door you would want your daughter to meet. Life gets complicated when he learns his only chance to pay for Harvard Medical School is to obtain a full scholarship. His problem is that while he has all the genius and credentials necessary, he has no life experience to set him apart from the other applicants, which seems to be the clinching detail.

His brilliance is observed in class by Professor Micky Rosa (Kevin Spacey) who eventually leads Ben into a card counting scheme with a secret team of classmates led by Rosa. As the team goes to Vegas, they begin to win incredible amounts of money at the blackjack table. Ben’s life slowly changes, as he is caught up in the glitz and glamour of living in the fast lane. He falls in love with teammate Jill (Kate Bosworth), and the team’s success eventually catches the attention of casino security enforcer Cole Williams (Laurence Fishburne).

As one might expect, there are very tense moments and quite a lot of action and suspense, as security tries to catch them counting cards. We see Ben turn away from his friends back in Boston and embrace a very worldly life. There are several twists and turns producing excitement about what will happen next. Eventually, all turns out okay, and Ben rejects the fast lane life, returning to his roots, although now he has a major life experience.

The movie sprinkles in a few minor curse words and, sadly, uses God’s name in vain once. Even in his more innocent stage, Ben engages in drinking beer at a tavern with his friends, and this is portrayed as normal college activity. Throughout the movie, we witness Ben slowing being seduced by the lure of making money quick and then falling into the pit of a hedonistic lifestyle. Ben commits fornication with Jill, although it is a brief shot and nothing is shown.

There are two scenes of Cole beating an individual caught counting cards. There are at least four instances of the team meeting at a “safe place” strip club where background scenery shows women in thongs dancing on poles. While one might see as much on the beach in a foreign country, it was unnecessary. There is one instance of a sexual innuendo and one inappropriate exchange between Jill and Ben at the club. The background shots at the club disturbed me and only added to the debauchery of Vegas.

“I made a covenant with my eyes not to look lustfully at a girl” Job 31:1 NIV.

Because of the background shots that had nothing to do with the story and the taking of God’s name in vain, I cannot recommend this movie to other Christians.

Negative
Negative—This film should not have been rated average for moral rating. One scene makes it very offensive. Warning for parents of teen boys—In the background in a scene in a Vegas bar, pole dancers can be seen essentially naked. (they have small pasties) Aside from that, the movie is “inspired by a true story”—I researched this—it’s about 2% reality and 98% made up. So, then what’s the point?
My Ratings: Moral rating: Offensive / Moviemaking quality: 4

Teri Spangler, age 53
Neutral
Neutral21 was an okay film. Not as smart as the Ocean’s 11-13 films. The dialogue was predictable. The storyline was sorta blah… but the ending was good. Nothing in the film was redeeming, inspiring, or clever. Uncomfortable sex scene. Kevin Spacey shines as usual. Overall, it was a somewhat entertaining time-killer, but I would recommend it to your friends carefully!!!
My Ratings: Moral rating: Average / Moviemaking quality: 4

Diana O, age 39
Comments from young people
Positive—I think that this movie is wonderful! Yes, there are some scenes that were a bit disturbing, for instance, the main characters meet at a strip club. The dialog is a tiny bit “Iffy” but, it wasn’t terrible. Also, there is some moderate violence: two torture scenes that don’t show too much. I was cringing, but it wasn’t that “Scary.” Personally, I think this movie was great, though. It was fast-paced, pretty realistic, smart, and thrilling. The film quality was a thumbs up, not the best I’ve seen, but good. Spiritually, I was disappointed when the main character lies repeatedly, but later he confesses and asks for forgiveness. Anyway, without spoiling it, all I really have to say is that it rocks.
My Ratings: Moral rating: Average / Moviemaking quality: 4

Devon, age 12
Positive—I had been waiting to see this movie for ages and was not disappointed. Ben was a very likable character and I enjoyed seeing him change throughout the film. This is a very exciting movie and is able to pull it off with little sex, violence and profanity. The storyline clearly represents the fact that while life can give us thrills and make us happy fast, it doesn’t last forever. When Ben and his mates were drinking, they were of legal age and did not drink obsessively which is nice to see in a movie with college students.
My Ratings: Moral rating: Better than Average / Moviemaking quality: 4