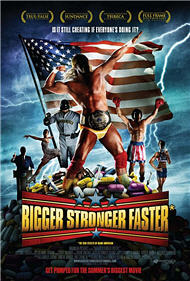 I’m ugly. Why was God so unfair to me this way? Answer

“Is it still cheating if everyone’s doing it?”

Here’s what the distributor says about their film: “In America, we define ourselves in the superlative: we are the biggest, strongest, fastest country in the world. We reward speed, size and above all else: winning—at sport, at business and at war. Metaphorically we are a nation on steroids. Is it any wonder that so many of our heroes are on performance enhancing drugs?

From the producers of “Bowling For Columbine” and “Fahrenheit 9/11” comes a new film that unflinchingly explores our win-at-all-cost culture through the lens of a personal journey. Blending comedy and pathos, BIGGER, STRONGER, FASTER is a collision of pop culture, animated sequences and first-person narrative, with a diverse cast including US Congressmen, professional athletes, medical experts and everyday gym rats.

At its heart, this is the story of director Christopher Bell and his two brothers, who grew up idolizing muscular giants like Hulk Hogan, Sylvester Stallone and Arnold Schwarzenegger, and who went on to become members of the steroid-subculture in an effort to realize their American dream. When you discover that your heroes have all broken the rules, do you follow the rules, or do you follow your heroes?”

Movie Critics
…Although the movie doesn’t defend steroid use, neither does it go on the attack. … “Bigger, Stronger, Faster*” left me convinced that the steroid scandals will abate as the drugs are reluctantly accepted as inevitable products of a continuing revolution in biotechnology. …

Stephen Holden, The New York Times
…The movie goes against the drumbeat of anti-steroid publicity, news reports and congressional hearings, to say that steroids are not only generally safe, but have been around longer and been used more widely than most people know. … Steroids are not very harmful, but by using them, we reveal a disturbing value system.

Josh Rosenblatt, Austin Chronicle
…Propelled by a love for his brothers (steroid users) and his own desire not ‘to cheat’ in order to compete in power-lifting, Christopher Bell doesn’t provide easy answers. … a Michael Moore-like folksy use of wry observation runs through the movie. …

Lisa Kennedy, Denver Post
…offering a thorough survey backed by no-nonsense interviews from every corner of the issue. More scrupulously reported than your average Michael Moore film but every bit as entertaining… never dull…

Peter Debruge, Variety
…He turns up lots of surprising information—noting… as he nears the conclusion that cheaters do, in fact, prosper. And that—in American athletics, anyway—it is very difficult to both do the right thing and win.