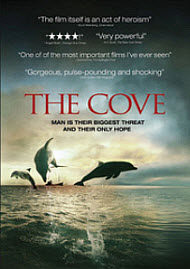 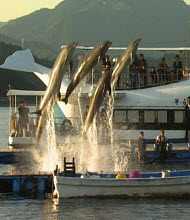 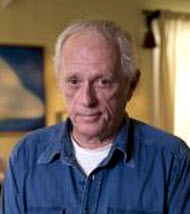 The art of fishing

Here’s what the distributor says about their film: “In a sleepy lagoon off the coast of Japan, behind a wall of barbed wire and “Keep Out” signs, lies a shocking secret. It is here, under cover of night, that the fishermen of Taiji engage in an unseen hunt for thousands of dolphins. The nature of the work is so horrifying, a few desperate men will stop at nothing to keep it hidden from the world. But when an elite team of activists, filmmakers and free-divers embark on a covert mission to penetrate the cove, they discover that the shocking atrocities they find there are just the tip of the iceberg.

Using state-of-the-art equipment, a group of activists, led by renown dolphin trainer Ric O’Barry, infiltrate a cove near Taijii, Japan to expose both a shocking instance of animal abuse and a serious threat to human health.”

Positive
Positive—This movie was one that I think most Christians should see. It was an expertly done documentary that actually kept you on the edge of your seat, and yet gave a great deal of powerfully presented information. There are scenes of dolphins being killed that might frighten small children, and there was a bit of bad language (I didn’t count). But overall, the movie was very well done, and will outrage anyone with a beating heart. I know it’s a documentary, but see it anyway!
My Ratings: Moral rating: Better than Average / Moviemaking quality: 5

Movie Critics
…There are many documentaries angry about the human destruction of the planetary peace. This is one of the very best—a certain Oscar nominee. It includes a great many facts about the craven International Whaling Commission and many insights into the mistreatment of dolphins… [4/4]

Roger Ebert, Chicago Sun-Times
…a powerful and effective piece of advocacy filmmaking… quite consciously structured as a thriller by director Louie Psihoyos…

Jeannette Catsoulis, The New York Times
…marvelously made agitprop documentary that enlightens, horrifies, and is a call to action to protect dolphins from mass slaughter…

Marjorie Baumgarten, The Austin Chronicle
…Eco-activist documentaries don’t get much more compelling than “The Cove,” an impassioned piece of advocacy filmmaking that follows “Flipper” trainer-turned-marine crusader Richard O'Barry in his efforts to end dolphin slaughter in Taiji, Japan. Casting a very wide net, this powerful polemic is simultaneously a love letter to a beloved species, an eye-opening primer on worldwide dolphin captivity, a playful paranoid thriller and a work of deep-seated (if sometimes hot-headed) moral outrage. …

Justin Chang, Variety
…“The Cove” advances some notions—dolphins can suffer from anxiety and are “self-aware” and know when their offspring are being slaughtered in the cove—that are hard to prove, but this is advocacy filmmaking. …