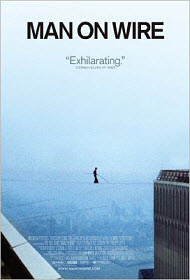 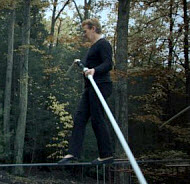 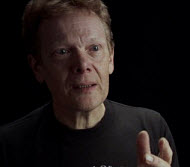 Here’s what the distributor says about their film: “On August 7, 1974, Philippe Petit, a French wire walker, juggler, and street performer days shy of his 25th birthday, spent 45 minutes walking, dancing, kneeling, and lying on a wire he and friends strung between the rooftops of the Twin Towers. Uses contemporary interviews, archival footage, and recreations to tell the story of his previous walks between towers of Notre Dame and of the Sydney Harbour Bridge, his passions and friendships, and the details of the night before the walk: getting cable into the towers, hiding from guards, and mounting the wire. It ends with observations of the profound changes the walk’s success brought to Philippe and those closest to him.”

Positive—It is difficult to describe how profoundly this film affected me. Philippe Petit’s legendary 1974 jaunt across a wire strung between the World Trade Center towers is a well known bit of New York City lore, but to actually witness it and be fully immersed into the planning and mindset of the man who did it is exhilarating.

His recalcitrance is unmatched. Philippe Petit and his conspirators openly acknowledge the illegality of their actions—in fact they are proud of them. The movie treats the operation exactly as it was: highly illegal, methodically planned, and brilliantly executed. It makes no apologies for the immoral actions of Philippe Petit, and doesn’t try to excuse them either on artistic grounds. Philippe Petit’s first action upon being released from police custody is to have sex with a groupie, which in other circumstances might seem a bit jarring, but here seems perfectly natural. He just danced on a high wire a quarter mile above the pavement with no safety net. As he himself says, “Death is very close.” He is a passionate man, and the filmmaker does not try and justify or excuse this, but merely presents it as who Philippe Petit is. It works.

Everything immoral fades when viewed in the context of what he accomplished. The still photos from the ground are astonishing, as the wire is transparent from that distance so he literally looks like he is walking on air between the towers. 9/11 is never mentioned, but looms large anyways, as it always does whenever images of the Twin Towers appear. His act is almost a repudiation of those horrific images from 2001, as once again the towers stand proud and are conquered not by terrorism, but by a lunatic performance artist from France. The result is transcendent, and everyone (including the policemen on the roof) know they have witnessed something unique.

I am not a believer, but from an ethical standpoint the film presents some flagrantly unethical activities. Philippe Petit cheats on his girlfriend after the act, breaks the law (he has been arrested over 500 times), and is unrepentant. That being said, he is an existentialist Frenchman, so perhaps this is expected. If anything this makes his feat even greater, since, being an atheist, his life is all he has. God is not there to catch him if he falls, so he is literally putting everything he is on the line when he steps out on that wire 1350 feet above the ground. The constant question asked him is “why?”, and his answer is simply because the towers are there and because he can.

In the end, the act eclipses any moral misgivings the viewer will have. No one was hurt, and for a brief moment, a man walked a wire and came closer to God than any of us are likely to in our lives. That he is an unbeliever only makes it that much more incredible.
My Ratings: Moral rating: Average / Moviemaking quality: 5