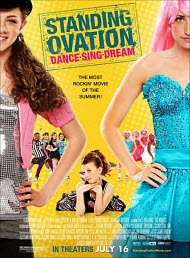 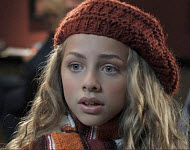 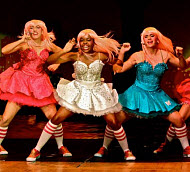 Here’s what the distributor says about their film: “Set in Atlantic City, junior high school best friends, Brittany (Kayla Jackson), Tatiana (Alexis Biesiada), Blaze (Pilar Martin), Cameron (Kayla Raparelli) and Maya (Na'jee Wilson) form the singing/dancing group, ‘The 5 Ovations.’ Despite all odds, they chase their dreams of becoming champions in the biggest television music video contest of the year. They may be short on money, but they are rich in friendship, talent and hope and these street-smart kids use their wits, courage and passion to create some fierce musical performances.

When a national TV network announces a music video contest with a one million dollar grand prize, ‘The 5 Ovations’ eagerly set to work on creating the perfect routine and music video. However, they must face off against their rival group, ‘The Wiggies’—Ziggy (London Clark), Angel (Erika Corvette), Zita (Ashley Cutrona), Twiggy (Devon Jordan) and Zoey (Jeana Zettler)—five rich, beautiful and scheming sisters whose performance trademark is their series of extravagant wigs and underhanded pranks. The Wiggies also enter the contest, helped by their flamboyant and unscrupulous father, Mr. Wiggs (Sal Dupree), who will stop at nothing to win—no matter what it takes!”

Comments from young people
Positive—I saw this film because I thought it would be fun to see. Objections: There is one curse word—the h word. Most of the girls in this film have an attitude. Brittany tries to bet on a horse. But she is stopped because of her age. So instead her grandfather bets for her. Joei Batalucci’s father had money stolen from him .So his daughter tries to find the man who did it. Joei Batalucci goes around threatening dangerous men. And the Wiggies are rude to the 5 Ovations. The Wiggies also cheat. I enjoyed the movie. I thought the music was good. But I must admit the acting was bad.And I think kids would enjoy it too. Parents might object to their kids seeing this because of the behavior and etc.
My Ratings: Moral rating: Better than Average / Moviemaking quality: 3