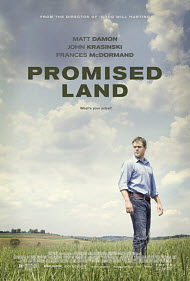 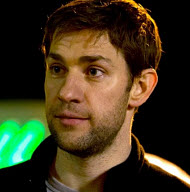 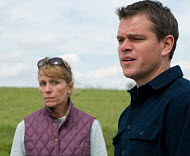 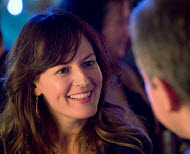 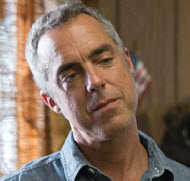 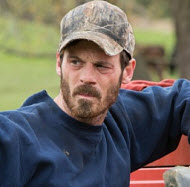 Here’s what the distributor says about their film: “A salesman for a natural gas company experiences life-changing events after arriving in a small town, where his corporation wants to tap into the available resources.

The story centers around Steve Butler (Damon) who has caught the eyes of top management at Global an energy company that specializes in obtaining natural gas trapped under ground through a process known as fracking. Steve Butler success lies in his ability to not only Sign-up a large percent of the land owners, but to close the deals quicker and at a lower cost then any other rep. Butler (Damon) and his partner Sue Thomason (McDormand arrive in a farming town in Pennsylvania, that like much of rural America, is struggling to keep their family farm above water. So many of the characters take pride in the number of generations through which the land has passed and fear that they will be unable to hold onto the land Promised to their children.

Butler, we learn came from a town, and a life, very similar to that of the people he is now determined to sign up land-owners to accept Global’s offer, for drilling rights to their properties. Butler is so good at what he does because he truly believes that these towns, have been hit so hard by economic decline are not not coming back. He tells the story of his own town, and how once the Caterpillar assembly plant closed, the town quickly died. That without industry, the idea of a town surviving solely on family farmers was a fantasy, one he could no longer buy. He was offering the towns last chance. As a farmer tells him ‘We are to poor to buy anything, and the land is the last thing we have to sell.”

At first it seems this is just going to be another domino falling after a light tap by Butler and Thomason, until a High School science teacher (Holbrook) during a town hall meeting, raises the question of the safety of Fracking. Their sales pitch becomes more complicated when an unknown environmental advocate (Krasinski) starts a grassroots campaign motivated by a tale of his family losing their dairy farm after all of the cows died as a result of the chemicals Global used to extract the gas. There is a powerful scene when Dustin Noble (Krasinski) goes to the local school and demonstrates to the children the process of drilling and injecting water and unknown chemicals into the ground in order to fracture shale and get the natural gas.

As the story unfolds at is clear the Butlers fight is internal as well as against others. We learn that his boots had been his grandfathers, and his unwillingness to part with them, symbolizes his continued connection to the land. However, Steve gets an envelope sent to him by Global containing a picture that was shown off by Dustin before to prove that his farm was destroyed, now enlarged, allowing Steve and Sue to find that what appeared to be a silo was in fact a lighthouse. Upon reporting this to the town’s mayor, Dustin leaves. However, in making his final confrontation with Steve, Dustin reveals that he actually works for Global, too! He was sent in upon hearing of the town’s decision to put this to a vote. This shocks Steve and plays upon his already wavering allegiance to his company. Finally, in a scene with a little girl operating a lemonade stand, Steve decides to tell the town of Dustin’s deception. The film ends with Steve knocking on Alice’s door.”

Neutral
Neutral—As a geophysical prospector, working largely in oil exploration, I was disappointed by the large, black brush used to paint the oil companies. I was also disappointed by the lack of ground-water science; it was primarily one side pushing money, and the other side pushing pictures of dead cows. That said, it was an enjoyable movie. The characters, script and cinematography were excellent. Most of the profanity was tucked into a brief bar-room scene, where it didn’t seem so offensive, almost like “The King’s Speech” “F” scene. A biblical equivalent of the leading man, Matt Damon, could be Saul, for he truly believes he is an honest man, just doing his job.
My Ratings: Moral rating: Good / Moviemaking quality: 4