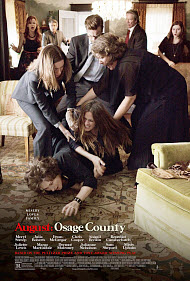 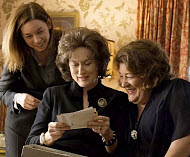 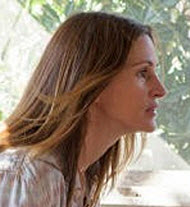 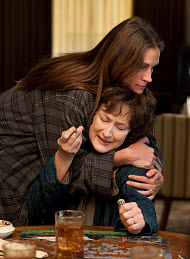 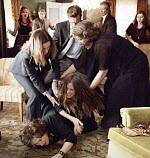 Here’s what the distributor says about their film: “Based on the Pulitzer Prize and Tony Award®-winning play by Tracy Letts, ‘August: Osage County‘ tells the dark, hilarious and deeply touching story of the strong-willed women of the Weston family, whose lives have diverged until a family crisis brings them back to the Midwest house they grew up in, and to the dysfunctional woman who raised them. Letts’ play made its Broadway debut in December 2007 after premiering at Chicago’s Steppenwolf Theatre earlier that year.

Neutral
Neutral—…I went to see this movie with anticipation of a decent ending. ***SPOILER*** I was disappointed. ***END SPOILER*** However, Julia Roberts and Meryl Streep, both, did a fantastic acting performance. The movie had a lot of dry humor moments but also a lot of language. The Lord’s name in vain was so much I lost count. I found the movie quite boring at times, as well, waiting for something positive to keep coming forth, but unfortunately it only got worse as more and more family secrets kept unraveling. I found this to be more of a dark-comedy/drama.

There was a scene where a mid aged man was giving drugs to a 14 year old girl and asking her to show him her breasts. Nothing was shown and the scene wasn’t completed, for the servant of the household put a stop before anything began. I don’t recall any other inappropriate sexual scenes.

I feel it was a waste of my money. I left twice to use the bathroom only to come back and find out I didn’t miss much. As much as the acting was superb the movie wasn’t one I’d say I’d brag about .
My Ratings: Moral rating: Offensive / Moviemaking quality: 4

Jen, age 34 (USA)
Negative
Negative—IF I had been Meryl Streep OR Julia Roberts, I would not have starred in this film. Are people, in general, nuts to sit through such as you call it a comedy/drama? I didn’t see too much “funny” in this. It definitely was a waste of my time and money. Where have all the good films gone? Where are the great and talented writers?

My thoughts: Don’t waste your time and money to sit through such stupidity, way too much drama… As I recall, there was ONE “funny” and, for the life of me, I can't even remember that one!!! AND, the use of the f-word so many times was outrageous and unnecessary!

Ruth Rogers, age 71 (USA)
Negative—“A Wicked Comedy”—Wicked, yes; Comedy, No. I am sorry I went to see the movie. It was a downer all the way. It was crude beyond belief, sarcastic, dark, heavy. I can’t believe so much vulgar language had to be used to convey the message that if you behave badly there will be dire consequences.

It’s hard to understand why two such renowned actors agreed to make this film. Comments from friends: “Disappointing” “I wish I hadn't gone” One positive comment from a friend: “It made me thankful I wasn't in a family like that.”

Please—our culture already can't speak without using the “F” word. I would like for Hollywood to raise the bar to a higher level. Thank you.
My Ratings: Moral rating: Extremely Offensive / Moviemaking quality: 2

Grace Sondreal, age 73 (USA)
Negative—I would like to ask you why Theater has always been considered, along with Art and Music, to be one of the Fine Arts? I’ve always assumed it was because they were to bring you into a finer appreciation of the beauty around you. I suppose that makes me a dinosaur, because now it seems people only find worth in the ugly and sordid things of life. In these hard times with economic, social and moral upheaval—we the populous sometimes look for moviemakers to let us see that there is a light at the end of the tunnel.

Yes, ugliness does permeate our existence, but movies made about the people who have risen above such things are so inspiring. Case in point: “The Blind Side,” “The Miracle Worker,” “Mandela,” “Ghandi,” and the list can go on and on. Wonderful high points where sacrifice and perseverance actually changed a situation for the better.

For the story line of “August: Osage County” all we need to do is read the headlines, watch Dr. Phil or Jerry Springer and see it played out before our eyes over and over again—a story of complete self centered misguidance. I think it is a travesty that Hollywood chose to ignore the need of the majority of people who are aching for hope and comfort in this crazy world and decided to immortalize such a manic and debauched script on the silver screen.
My Ratings: Moral rating: Extremely Offensive / Moviemaking quality: none

Cynthia, age 54 (USA)
Negative—I rented this knowing in advance that it dealt with serious issues and family relations, and that it would probably contain language (as all movies do these days). I was surprised at the amount of bad language, sudden loud outbursts of the “f” word as well as every other curse word you’ve ever heard.

Beyond the language, there was not one main character that I could identify with or feel sympathy. All of the main characters were horrible, awful people. Meryl Streep, as much as I like her as an actress, completely overacted her part. The only parts of the movie that I enjoyed were where she toned it down a bit (the boot story scene) and let her true talent show through without the curse word screaming fits that her character was so fond of.

***SPOILERS*** Two of the characters are in an incestuous relationship (first they are first cousins which they know about and are fine with, then they find out they are BROTHER AND SISTER). One of the males is a pot smoker and promises he’ll supply the 14-year old girl with pot. Later he wants to see her breasts in exchange for pot. The 14-year old girl is disrespectful and smokes, and her parents are fine with that.

One man cheated on his wife with a younger woman. The matriarch of the family is a drug abuser and has hundreds of bottles of prescription pain killers and depressants and flaunts her use of them. She also informs her daughters that she is cutting them completely out of the father’s estate (despite what his will says) and offers to let them purchase her old home furnishings because she plans to buy all new things.

The patriarch of the family is an alcoholic who commits suicide. Another man in the family is a pot smoker so much to the point that he never realizes his son is not really his son, and it’s a family joke how much pot he smokes. One daughter brings food to her mother and then proceeds to scream obscenities at her “eat the fish, b***h” and “eat the fish” over and over, screaming at her.
My Ratings: Moral rating: Extremely Offensive / Moviemaking quality: 1