Battle of the Year: The Dream Team also known as “Planet B Boy” 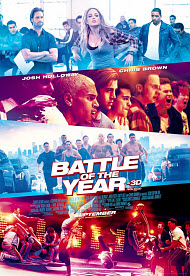 dancing in the Bible

“The world is watching.”

Here’s what the distributor says about their film: “‘Battle of the Year’ is the Olympics of break dancing, a tournament held every year that attracts all the best teams from around the world, but the Americans haven’t won in fifteen years. Los Angeles Hip Hop mogul and former B-Boy Dante (Alonso) wants to put the country that started the Sport back on top. He enlists his hard-luck friend Blake (Holloway), who was a championship basketball coach, to coach his team. Armed with the theory that the right coach can make any team champions, they assemble a Dream Team of all the best b-boys across the country. With only three months until Battle of the Year, Blake has to use every tactic he knows to get twelve talented individuals to come together as a team if they’re going to bring the Trophy back to America where it started. Inspired by the actual World championship held yearly in France and the award-winning documentary, ‘Planet B Boy,’ the film is about an all-star American b-boy crew training to compete in France at the Battle of the Year (BOTY) International Championships. After a decade of defeat, the crew and their coach must go up against the best and greatest b-boys in the world: the Koreans, the Russians and the French who have dominated the original American dance form for the last 10 years.”

Frank Scheck, The Hollywood Reporter
…The miracle of the new 3-D dance film “Battle of the Year” is how it can be so relentlessly boring while there is so much frenetic activity on screen. Despite the break-dance spins and disorienting strobe lights in the performance scenes, the movie feels sluggish throughout. …

Miriam Bale, The New York Times
…You may find your head spinning at this film (and not in a good way)… The 3-D is a pain, and the excitable editing, slo-mo and speeded-up action frustrate attempts to watch the athleticism on display…

Liam Lacey, The Globe and Mail
…Dance dud… stumbles with too many heartfelt speeches and not nearly enough dancing. …

Rafer Guzmán, Newsday
…More prevailing than the flailing arms and legs of the American b-boys trying to reassert their world dominance is the treacle that's made of their underdog chutzpah and interpersonal dramas. …

Ed Gonzalez, Slant magazine
…Even as teen dance films go, this one is clumsy, miscast, lazy and cliched. …

Scott Bowles, USA Today
…cliché-ridden dialogue and a predictable plot offering the flimsiest framework on which to hang the dance scenes' feats of incredible athleticism and artistry…