for sustained intense sequences of menace, some violence with bloody images, and for substance use. 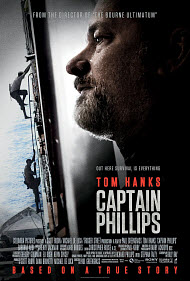 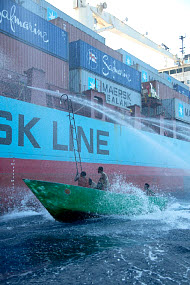 Based on the non-fiction book A Captain's Duty: Somali Pirates, Navy SEALS, and Dangerous Days at Sea by Richard Phillips and Stephan Talty

“Out here survival is everything.”

“Captain Phillips,” a drama based on true events in the life of Richard Phillips, is highly suspenseful for a mostly non-action film. Due to the meticulous camera work, spectacular acting, particularly by Tom Hanks and a couple of the lead pirates, and overall timing in the film, it is a thrilling portrayal of a recent historical event (2009), with some controversial facts changed or ignored by the producers. These piracy events aren’t so rare. The film also does a good job of showing the desperation held by individuals in the Somali community, all while not excusing their corruption. There is a warm down period at the end of this film which is very unique and worthy of any filmmaker’s attention. It is gripping and emotional, a fantastic example of what the media of film can accomplish through subtlety.

I thoroughly enjoyed this film. There isn’t too much to say about it without giving things away unnecessarily. I like that the trailers which I observed did not give away the whole story.

The amount of profanity in this film is very minimal—a few words spoken by Somali Pirates in haste. It is also not emphasized. There is no sexuality what-so-ever, inherent to the story.

The violence in “Captain Phillips” is also minimal, at least for what one might expect from such barbary. There are some pretty brutal but necessary violent acts at the very end which are 80-90% off camera. The lack of gratuitous nature of what is shown on camera of this violence is commendable. It is respectful to family audiences and is a good example of what can be done in films to portray explicit events without actually putting it on the screen.

Enjoy “Captain Phillips” with your friends, your family, your teenagers and perhaps even younger ones if you believe they can handle the tension. It’s a very well made, suspenseful film and an excellent drama.

Positive
Positive—I saw this movie Friday night. I was totally blown away. Great performance by Tom Hanks!! He should be nominated for an Oscar or Emmy. Great movie. This film keeps you on the edge of your seat. The ending is very emotional. Grab some tissues. You will need them for the end of the film. The foul language was very light. No sex in this movie whatsoever. Highly recommend this movie for teens 14 and up.
My Ratings: Moral rating: Better than Average / Moviemaking quality: 5

Travis Ginther, age 28 (USA)
Positive—My husband and I practically sat on the edge of our seats during this film. I cannot recall hearing any F bombs, there was no nudity, and no sex. What a wonderful relief ! There is some violence that I thought would be too intense for young kids. I liked Phillips, and he seemed like one of those guys you would like for a neighbor. As a believer, I found the bad language minimal, and, overall, this movie is worth the trip to the cinema and the price of the ticket.
My Ratings: Moral rating: Good / Moviemaking quality: 5

Maggie Hays, age 66 (USA)
Positive—Great movie! I hope all Hollywood watches this movie to learn that even the most desperate situation (with sailors yet) can be presented without profanity. Oscar material.
My Ratings: Moral rating: Good / Moviemaking quality: 4½

Brian Schacht, age 66 (Canada)
Positive—This was a well made thriller from director Paul Greengrass. Tom Hanks gives a stellar performance as well. It was very refreshing to see an action film without any sexual content/dialog, but there were still some language issues in this film including a handful of s-words, God’s name abused and paired with d—n a few times and Christ’s name abused once or twice as well. There were a few minor scattered profanities as well.

The violence wasn’t graphic but was still a bit bloody at times. A character steps on glass and his bloody feet are shown, characters are beaten and pummeled in a few scenes, and there’s lots of gunfire. The bloodiest scene was when a few characters get shot in the head (not seen) and blood sprays everywhere and on another character. The pirates also consume some form of “plant” substance. We never find out what it is, but some may see it as a form of drug.

This was still a great film about heroism and had some great moral values standing behind it as well. Hanks” character was always trying to talk to the pirates asking why they did what they did and he’s a caring, loving father. This is not a family film but I do recommend it for ages 13-14+ based on maturity. A great movie, but some minor content issues mar it slightly and the theme may be too intense for some audiences.
My Ratings: Moral rating: Better than Average / Moviemaking quality: 4

Curtis McParland, age 21 (USA)
Positive—My wife and I just saw this movie. I can’t recall seeing a better movie for many years. It is intense throughout the movie. For Christian values, there is almost nothing offensive. There is one scene that is bloody, but no actual footage of the carnage that took place. “Captain Phillips” should be seen by most Americans over the age of 14. It shows the extent America will go for one of its own who is in trouble.
My Ratings: Moral rating: Excellent! / Moviemaking quality: 5

Wayne, age 57 (USA)
Positive—A definite MUST see movie; Just got back from seeing “Captain Phillips;” Tom Hanks acting will probably win him another Oscar. It’s such a tense drama with the violence NOT overdone, and the climax just builds and builds. Incredible tribute to the real Captain Phillips who remained so calm and respectful to the pirates in the midst chaos. You won’t be disappointed.
My Ratings: Moral rating: Good / Moviemaking quality: 5

Dottie, age 49+ (USA)
Positive—This movie was excellent!! My husband and I went to see it last weekend for our anniversary. We don’t go to the movies very often, and it was money well spent! Tom Hanks was absolutely outstanding! The movie was very well done, and we were on the edge of our seats throughout the movie. It was extremely engaging, and a story beautifully told.

What we loved about it was that there was no offensive language, and very minimal violence, necessary to portray the story accurately. There was one scene with blood, but they do not show anyone getting shot, just the blood afterward. This movie has a strong message of patriotism, and helps you appreciate all that our armed forces do to help a fellow American in trouble.

Captain Phillips is a very moral character with a strong, loyal, and devoted love for his family, his crew, and his country. My husband and I even felt broken and moved with compassion towards the pirates. The movie does an excellent job showing their desperate situation, and why they were driven to go after the ship. I highly recommend this movie for anyone age 14 and up. It was so nice to leave a movie feeling good and feeling like I didn’t watch something that compromised my Christian values. This movie truly made me appreciate what this country is all about and how much it means to have the freedoms and blessings that other countries do not! Loved this film!!
My Ratings: Moral rating: Good / Moviemaking quality: 5

Laurel S., age 42 (USA)
Positive—Good action/overcoming adversity movie, especially since it’s taken from the real world. Tom Hanks carried this movie. The hijackers, who lacked much if any acting experience, became dull and predictable, even though this is non-fiction. The trailers highlighting the hijacker “captain” were praising his ad-lib lines, which I thought he did not deserve.

It has its moments of suspense and action, along with men displaying very good and very bad values. I almost did not want to see this, but wanted to take my 14-year old son, explaining to him that his great grandfather was a merchant marine captain during World War 2. Like so many movies I have seen over the past few years, there just seems to be a lack of depth and/or long lasting meaning in them. The plot in “Captain Phillips” was simple, obviously, and shows a group of men overcoming a near disaster. It’s worth waiting for the DVD.
My Ratings: Moral rating: Good / Moviemaking quality: 3½

Gale, age 37 (USA)
Positive—I believe that this is the best current action adult movie available. My hats off to everyone involved; no sexual content, no cleavage, language is moderate, with great suspense and action. I wish more movies were made with this quality. Will be purchasing this one!
My Ratings: Moral rating: Excellent! / Moviemaking quality: 5

Mwest, age 39 (USA)
Positive—Like others… excellent movie, brought me to tears! Tom Hanks… yes, yes he deserves an Oscar for this one but he has to share it with the actors (Abdi, Abdirahman, Ahmed and Ali) who played his captors; they were so believable! Exceptional acting!
My Ratings: Moral rating: Better than Average / Moviemaking quality: 5

Sid Owens, age 65+ (USA)
Positive—This is an excellent movie, but I do not recommend it for all people, because of the “take down” scene at the end of the movie. Some adults and teens, and, in my opinion, most children do not need to see blood and brain matter (though not real) blown all over the main character. The story line, acting, and photography were excellent. Once again Tom Hanks did an excellent job of showing how it really is to survive a hostage “take down” when you are the hostage. His portrayal the hostages reaction while being treated by the medical staff was spot-on. That portion of the movie could be used to train HRT and medical personnel on how they should react in those kinds of situations.
My Ratings: Moral rating: Excellent! / Moviemaking quality: 5

Doug Davis, age 65 (USA)
Negative
Negative—I was disappointed in hearing what a good movie this was with so little offensive language only to hear God’s name used in the manner of cursing when a crew member says G… D… This happens at the scene where the captain is being put in the life boat, can’t imagine that followers of Christ would give a positive rating on the language after hearing this.
My Ratings: Moral rating: Offensive / Moviemaking quality: 4

Jon, age 42 (USA)
Comments from young people
Positive—This is a very well done movie. Very emotional and gripping. You will be rooting for Philips. A must see one of the best of the year. Tom Hanks has got to get best actor for this role.
My Ratings: Moral rating: Excellent! / Moviemaking quality: 5