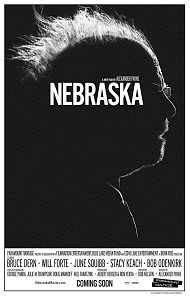 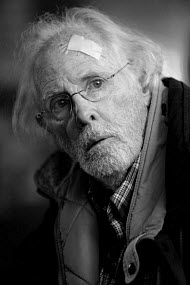 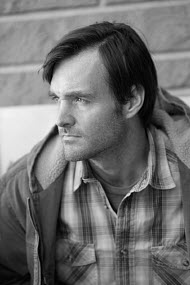 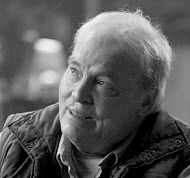 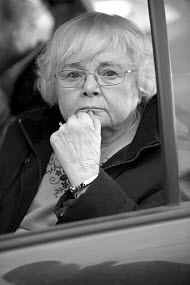 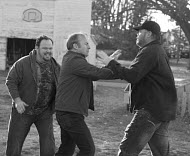 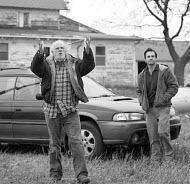 old age / difficulties of being elderly

hope of winning sweepstakes, despite the odds

living in a small town

learning new things about parents you thought you knew well

The story revolves around an elderly and driven man named Woody Grant (Bruce Dern) who plans on going to Lincoln, Nebraska to collect a $1 million sweepstakes prize he was told he won. His son David (Will Forte) ends up tagging along, despite his skepticism about the whole situation. As the father and son make their way to Lincoln, they see old friends and family who find out about said prize, and try to take advantage of their situation, not knowing that it may be a hoax.

The film is simple, in that it is not hard to follow. It is down-to-earth. The characters are likable, and easy to relate to (the town drunk, the character with the dead-end job at a stereo store, the angry elderly wife, etc.), and the ending offers a form of resolution for the strained relationship between the father and the son.

Bruce Dern’s character Woody, of all the characters, is the one worth analyzing, as he is depicted as a hardened and lowly man who has endured many hard times (***SPOILER*** It is revealed by his wife Kate that his brother died of scarlet fever at age 2, and his 19 year old sister died in a car wreck. ***END SPOILER***).

Throughout the film, not only does the audience learn of his regretful life and actions, but so does his son David, who, over time, feels though he is traveling with a completely different person. The intrigue that Woody brings to the screen (despite his sexist remarks) brings the viewer into the story, leaving them hoping for more.

Though I did enjoy this film very much, there are others viewers that may not care for its mature subject matter.

Violence: There is little violence in the film, but it is still present. One character drunkenly falls and hits his head while in a motel room, and is sent to get stitches in his head (the camera shows the stitches being put in). There is also an argument that occurs between two characters that leads to a short fight. Later on, there is a mugging by two hooded men. Also, a man gets punched in the face, and is later seen with a black eye.

Sex/Nudity: There is not much sex in this film, but there is much sexual dialogue and other instances. David (near the film’s beginning) is seen asking if his ex-girlfriend is willing to move back in with him, and if they are still having sex or not. Talk of previous rape charges are made regarding one of the characters. Words like “screwing” are used in reference to sex. There is also talk of adultery and of someone trying to get into another’s bloomers. There is one scene set in a cemetery, where a female character flashes the grave of a former flame (though the camera does not show her naked) who she left because of his supposed addiction to “so much weed.”

Language: The film is very heavy in foul language, and I appreciate that the film is rated “R” specifically because of that, as many films these days have much swearing and are still given a lower viewing rating. There are some uses of “f***,” 10 uses of “sh**,” several slang terms for genitalia (“c*ck,” “boobs,” and “t**ties”), at least 13 uses of “hell,” “d*mn” (4), “G*dd*mns” (7), and other examples of using God and Jesus’s name profanely.

Overall, I believe this film is of unique quality, specifically for its use of black-and-white imagery to display simplicity and hollowness, its easily labelled characters that need no explanation, the lead characters, and the growth between the father and son in the film, which emphasizes the importance of family, whether estranged or not.

“Children, obey your parents in everything, for this pleases the Lord” (Colossians 3:20).

However, due to the film’s heavy use of coarse language and other mature subject matter, I do not recommend this film for Christian viewing. This film is more for those who have a passion for cinema and/or are fans of Bruce Dern.

Positive
Positive—This comment is about the movie, Nebraska, the latest film from the very talented Alexander Payne. Bruce Dern puts in a stunning performance as a confused old man who is convinced that he has won a million dollars. Will Forte is strong as his very loving, long suffering son, David, who tries to help his father in his delusional state. This movie is richly and densely textured with many layers of themes, all beautifully articulated and sewn together seamlessly.

Filmed in black and white with good contrast, the movie is set against a background of those stark landscapes of American plains and farms and highways stretching for miles that are unique to this country. This is an intelligently written movie with finely defined roles.

Surely Bruce Dern will win awards galore for his perfect pitch performance as Woody Grant, and Will Forte is just wonderful as his son.
My Ratings: Moral rating: Offensive / Moviemaking quality: 4½

Halyna Barannik, age 67 (USA)
Positive—I thought “Nebraska” showed small town life as a microcosm of the world. Good and evil were battling it out. Stacy Keach was fittingly sleazy as the slimy and rapacious fortune hunter. Bruce Dern and June Squibb were touching and true to life as the embittered lottery enthusiast and his sarcastic wife.

I thought the film’s message was the importance of family love and togetherness. Will Forte, as the long suffering son trying to please his dissatisfied dad, was truly wonderful. The vignettes of the townsfolk and the vast empty spaces in bleak black and white gave the film a certain documentary quality.
My Ratings: Moral rating: Offensive / Moviemaking quality: 4½

Morris, age 49 (USA)
Positive—This is a very good movie and very realistic. All the characters seem like people I’ve already met, not like cardboard cutouts with no character development like in some movies. People are flawed and this theme is seen in “Nebraska”. For one thing it shows how money can corrupt people and can change relationships in the blink of an eye. Note how the relatives he sees in Hawthorne all have a one-track mind; no matter what they try to talk about it all comes back to “How can we get some of Woody’s winnings?”

As movies go, I’ve seen quite a wide variety. G-rated, PG, PG-13, R-rated. This movie by no means deserved an R rating. There was no nudity, almost no violence. (“The Passion of the Christ” by the way was an excellent movie but VERY bloody and certainly deserved an “R” rating.) If you’ll note, yes it had quite a fair bit of drinking, but it was always portrayed negatively. The obviously-alcoholic father arguing that he wasn’t a drunk, that drinking beer instead of liquor means you’re not an alcoholic, and his son David always correcting him and arguing that no, you ARE an alcoholic and you’ve been one for my entire life. Even finally getting his dad to admit he is a drunk, even if only for a moment and even if only as if to say “So what? Don’t judge me.” But it is, correctly, judgmental and shows alcoholism for what it is.

The language was the only thing that “earned” it an R rating and for this the M. P. A. A. should be ashamed of themselves because far worse movies they have let slide by with a PG-13 rating. I’ve seen shows on television that are much worse than anything in “Nebraska,” let alone some PG-13 “summer blockbuster” movies with people’s heads getting blown off and tons of sex and nudity. The M. P. A. A. gets a cut of movies’ profits and as such it is not by any means an impartial observer. Summer blockbusters that draw in huge audiences, well, the M. P. A. A. tends to let them get away with a LOT more than small independent films aimed at a more artsy but much smaller audience. Mostly the M. P. A. A. ratings should be at best taken with a giant grain of salt if not ignored altogether. See all »
Maybe I’m too worldly of a Christian, but profanity is not high on my list of things to be offended about. Personally, I can’t stand to hear blasphemy, but let’s be real OK? I’ve spent many years out in the real world and real people use profanity. The real world doesn’t sound like the inside of a monastery, so if you’re looking to watch a movie that is realistic then be prepared to hear some foul language because that is the way most people speak. I would be MUCH more offended by a movie portraying the wage slavery economic model (capitalism) and its attendant greed as a good thing than by some actors portraying real people and in the process using some bad language. I would be much more offended by a movie that mocks Jesus or tries to portray Christianity as a mythology than by profanity.

There are simply far too many vastly more important things to be upset about in this world and especially in this rotten country than some actors realistically portraying how your average person talks. To me it’s a non-issue.

So, bottom line: “Nebraska” is a good movie that I highly recommend. Though I wouldn’t necessarily feel as comfortable about a little kid seeing it the movie seems perfectly suitable for teenagers and adults. Nothing in it whatsoever seems to be so offensive that I would encourage any adult or teenager to stay away from it. If someone will only go see movies that have no profanity at all in them or movies that act like drugs and alcohol don’t exist and that pretend that nobody has sex for any reason other than procreation then they’re cutting themselves out of many MANY good movies and whittling their list of potential movies down to a very narrow and, let’s face it, pretty boring list. Someone like that seems to fit the definition of that phrase “so heaven-bound they’re no Earthly good.”
My Ratings: Moral rating: Better than Average / Moviemaking quality: 5