for pervasive action and violence including frenetic gunplay, and for some language and drug material. 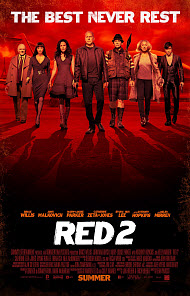 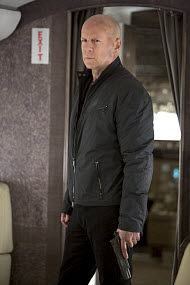 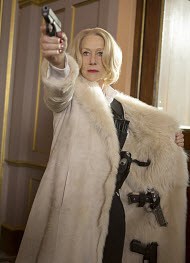 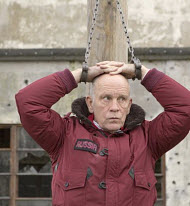 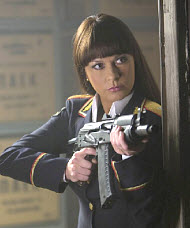 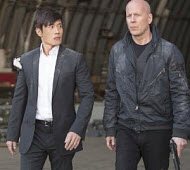 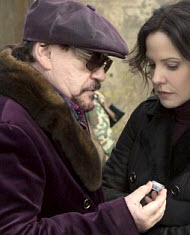 “It’s important to enjoy life while you still can!”

For Retired Extremely Dangerous (RED) ex-spy Frank Moses (Bruce Willis), the good life is sitting at home enjoying the company of his girlfriend, Sarah (Mary-Louise Parker), relaxing on weekends, doing virtually nothing. That all changes when he learns that there are forces at work that are out to make him retire—permanently! These enemies will stop at nothing to make him pay for his past involvement in super secret agent stuff. He knows too much, has seen too much, and his enemies want him dead.

Wait a minute, wasn’t that the whole plot of the original “RED” movie?

Honestly, there you have it. A couple of years ago, Frank and his old pals Marvin (John Malkovich) and Victoria (Helen Mirren) were all forced out of retirement by would-be assassins who wanted to cover up their tracks by killing anyone who was involved in a secret government mission. The last movie was cute—based on a comic book of the same name—the original had some, well, originality. The thought of these middle aged, seasoned former spies who were able to take names and kick butt was pretty exciting. The pace was quick, great comic-like special effects, and witty dialog. Sadly, because there is nothing really new in this sequel, all of the charm of the original is gone, leaving the audience with—haven’t we seen all this before? Pretty much the only change in the film is that now our fight has gone global, in that our heroes must save the entire former Soviet Union from obliteration.

This film suffers from the Hollywood belief that if it makes good money, we have to have a sequel! Bigger special effects and bigger budgets do not always equate to better, more enjoyable movies. To that end, I am chalking this one into the “you should have left well enough alone” category. Save your money and rent the DVD of the original—even if you’ve seen it before—you’ll be happy you did.

Positive
Positive—I enjoyed this sequel about as much as the original. If the original offended you too much, this one probably will, too. Typical Hollywood PG-13 violence and language exists, but on the milder side of the spectrum, IMO. Good mix of humor, action, intrigue.
My Ratings: Moral rating: Offensive / Moviemaking quality: 3½

Jeremy Klein, age 58 (USA)
Positive—This is an excellent movie, fully as good as the original, which was wonderful—script, comic-relief, characters, cinematography, special effects, fight choreography, and a load of Oscar-winning actors. I gave this a better than average moral rating because it is exceptionally rare for Hollywood to replace profanity with, “What the Sam hill?” “heck” and “bollocks”. It was like watching “Leave it to Beaver,” but violent.

It includes the most amazing demonstration of a modern Gatling gun ever filmed. The violence was hard-core Old-Testament, but free of gore, and the director took great pains to show the good guys sparing lives wherever possible. Everyone kept their clothes on, and the sex was limited to passionate kisses.

As a Biblical message, like all good-guy vs. Bad-guy movies it did a great job of illustrating that there is no greater love than to lay down one’s life for another.
My Ratings: Moral rating: Better than Average / Moviemaking quality: 4½

Brian Schacht, age 66 (Canada)
Positive—Great film. Lot’s of stuff blew up. Very humorous. A clean film. If you aren’t looking for the cussing then you won’t notice much. It’s not a serious film. Just fun and relaxing. The whole family will enjoy it.
My Ratings: Moral rating: Better than Average / Moviemaking quality: 5

John Neal, age 52 (USA)
Positive—I have to disagree with the reviewer—I loved Red 2. I thought it was hilarious, and just as good (if not better) as the original. Former characters come in for cameos and new villains and heroes alike intrude on a plot driven by action, humor, irony, and sarcasm. If you loved the first round with these retired assassins, and want more of the same paranoia, shoot-outs, witty one-liners, dark comedy, and particularly, Helen Mirren with a gun (she also has a great throwback to one of her earlier and well-known television roles)—see it. It's great.
My Ratings: Moral rating: Better than Average / Moviemaking quality: 4½

Charity, age 30 (USA)
Negative
Negative—Wish we had remembered to check Christian Answers before purchasing this video from Amazon Instant Video. We enjoyed the first movie immensely and had high hopes for this one. But some movies are quirky funny and others forced quirky. This movie is the latter. They tried too hard. There were few comic reliefs with a whole lot of violence and disjointed characters. What made the first movie brilliant was sadly tired and old in the second. The actors seemed to be sleepwalking through their roles, but, to their credit, they didn’t have a whole lot to work with in terms of story or script. Save your money and skip it.
My Ratings: Moral rating: Offensive / Moviemaking quality: 2

Pam , age 58 (USA)
Negative—First, let me say that I loved the original RED movie. The concept of “Retired Extremely Dangerous” was unique, and the original movie was humorous and light. Unfortunately the sequel, “RED 2,” has lost almost all of the good qualities of the original. “RED 2” is a violent, action oriented, brutal film with only a few instances of comic relief. Also, the acting seemed forced, and I never connected with the characters.

Morally, there is a lot of violence shown and even more implied with torture routinely threatened. There is some language including one use of the F-word. One of the characters routinely passionately kisses other characters as a way to trick them into assisting the group. I had really looked forward to this movie, but felt like I needed a bath when it was over. Even for adults, I don’t recommend this movie.
My Ratings: Moral rating: Offensive / Moviemaking quality: 4

C, age 15 (USA)
Movie Critics
…RED 2 may be the most entertaining action movie of the year, with lots of exciting action scenes and humor. … a strong moral worldview stressing right and wrong, the foul language and action violence warrants caution for young viewers. …

Ted Baehr, Movieguide
…All viewers get, then, is a series of amped-up but well-worn action sequences, a mounting tally of dead or dying, and a nuclear explosion that's shrugged off like one more annoying sign-up letter from the AARP. …

Bob Hoose, Plugged In
…Does just about everything RED did, just not quite as well. Makes attempts at the same charm and flair but the execution is often forced. …

Jeffrey Huston, Crosswalk
…Resemblances to a slew of similarly conceived titles and potential sequel-fatigue pose challenges for this second installment. …

Justin Lowe, The Hollywood Reporter
…The result feels like what the Bourne movies would have delivered if the screenwriters had opted for humour over spycraft. Or The Expendables if it had been any good. …

Graham Killeen, Journal Sentinel
…The gang’s all here, but the schtick is getting tired. … things do tend to drag before the too-violent third act turns too-bloody. …

Adam Nayman, The Globe and Mail