for language including sexual references, some graphic nudity, violence and drug use. 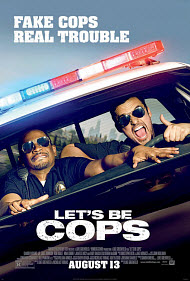 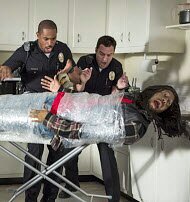 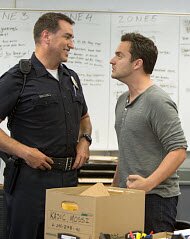 “Let’s Be Cops” is the story of two friends, Justin, a employee of a huge video game designing company, and Ryan, a former college football player. The two realize that with all the time spent in Los Angeles, they have accomplished very little. One night Justin and Ryan are invited to a costume party. As it turns out, they walk into a “masquerade” party dressed as police officers. One by one, people start to mistake them for real cops. Justin and Ryan decide to take advantage of this opportunity to play “pretend.” When they take their pretend too far, however, they are caught in a case involving some big-time drug lords. Will Justin and Ryan be able to continue the ruse and take down the drug lords? Or will their charade finally catch up to them?

Let me just get straight to the point. “Let’s Be Cops” is funny… for the most part. The two main characters, Justin and Ryan, have really good comedic chemistry (as others have pointed out) and have clean moments that almost had my sides splitting. And for the most part, looking at it from a distance, I did enjoy “Let’s Be Cops.”

However, comedic based films are like taking medicine. A little dose is okay. Too much, though, is dangerous. “Let’s be Cops” borders on a dose that is dangerous. As someone mentioned to me, this movie could have been just as funny (with the few relatively clean moments that occurred) had they deleted some of the more appalling and inappropriate content. This could have, and should have, been edited down to a PG-13 rating.

The premise of this movie is that two VERY unlikely guys end up becoming cops, acting in the most bizarre non-cop-like manner. The writers could have taken this and run with it a little further, in a cleaner manner. Yes, this movie is funny. Admittedly, even some of the “questionable moments” (like a scene where Justin and Ryan catch a kid smoking marijuana, take it and smoke it front of them) had me chuckling. The after effect, though, as I walked out of the theater, left a bitter taste in my mouth and with thoughts of, “Some of that was just unnecessary.”

Be forewarned, “Let’s Be Cops” is rated R, and for good reasons (there is so much objectionable material, I was unable to write everything down and had to draw from other sources!).

Violence: There are few fight scenes in this film. There are a few scenes involving gunfire. There is also a car accident at the beginning of the film (no one is hurt, though). There is a scene where Justin and Ryan are called to a “domestic dispute” scene involving sorority sisters and end up fighting with the sisters (include Ryan getting kicked in his private area). There are also some scenes of reckless driving

Sexual Content/Nudity: There is a prolonged scene, in the middle of the film, where Justin and Ryan are called in as backup at a robbery. When they enter, one of the robbers is running towards them completely naked (we get shots of him from the front and from behind, no genitals are shown). The naked man ends up falling over and landing on top of Justin (the movement the naked man makes, while on top, to me was considered sexual). There is a scene where Justin and Ryan are mistaken for strippers at a bar, and they begin taking their clothes off. One of the characters takes her shirt off for Justin (we do not see her breasts, however). One woman does a flip for Ryan and shows her genital area (clothed by underwear). Ryan, in a flashback, is shown doing a commercial for herpes medication. There is also other sexual dialog that occurs in this movie, There are also scenes involving crude sexual dances. One person is shot in the testicles. Two people are seen “humping” each other.

There are no redeeming lessons I can draw from “Let’s Be Cops.” The moments that were clean were incredibly funny. Had this movie been edited down, I would have considered adding it to my DVD collection; there would have to be A LOT of editing, though. For those who are uncomfortable with the content that has been described, I advise you to avoid “Let’s Be Cops.” Save your money.

Negative
Negative—…I went to see this movie with my friend expecting to get a good laugh with clean humor, but, unfortunately, I was wrong—not to my surprise (it’s Hollywood). …my biggest problem with the movie is the fact that it had TONS of sexual references, nudity, and… language. I’m a paramedic, so most language I don’t have the hardest time hearing, just because I hear it all the time at work, but the one thing I hate is when someone takes the Lord’s name in vain, which occurs a couple times throughout the movie. There are tons of F-bombs, SH-words, etc.

This movie most definitely would NOT be a good movie for your kids, 17 or younger, (it’s rated R for a reason), I mean I don’t even think I should have seen it. We need to remember that what we put before our eyes will affect us down the road. Hollywood is smart, but evil, they know how to capture their audience while filling them with garbage. I hope I didn’t burst your bubble, but you need to expect something bad in every movie Hollywood makes. I would rate this movie extremely offensive and not suitable for any audience that has moral values, but if you’re going to see it, please DON’T take your kids.
My Ratings: Moral rating: Extremely Offensive / Moviemaking quality: 4½