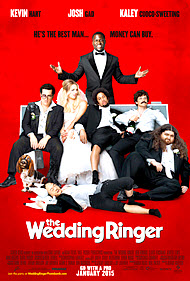 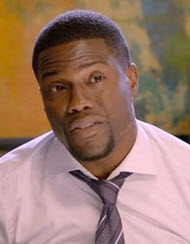 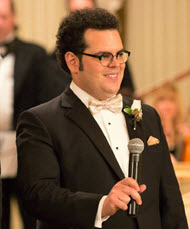 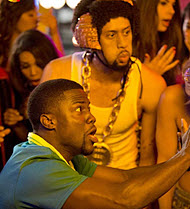 not having a best man for your wedding

Here’s what the distributor says about their film: “In ‘The Wedding Ringer,” Jimmy (Hart) provides best man services for socially challenged guys, who—for whatever reason—have no one close enough to agree to stand by them on the day of their wedding. Doug Harris (Josh Gad) is a loveable but socially awkward (loner), groom-to-be with a problem: he has no best man. With less than two weeks to go until he marries the girl of his dreams (Kaley Cuoco-Sweeting), Doug is referred to Jimmy Callahan (Kevin Hart), owner and CEO of Best Man, Inc., a company that provides flattering best men for socially challenged guys in need. To make matters worse, Doug (Gad) fabricates the names of not only a best man but nine groomsmen as well. What ensues is a hilarious wedding charade as they try to pull off the big con, and an unexpected budding bromance between Doug and his fake best man Jimmy. The charade designed to make Doug look his best threatens to destroy everything if it fails.”

Negative
Negative—“A serious aside. Really serious. And really indelicate. I watched The Wedding Ringer, for the first time; several days ago. I like the diminutive, sharp Kevin Hart. I’ve liked Josh Gad ever since I saw him in “The Rocker.” The Wedding Ringer was interesting enough to not jump the channels; but I was really, really disturbed by scenes that, I believe, have and had no place in a movie; in my opinion, of any release or rating. I won’t go into details, but it was sexually charged bachelor and after bachelor party scenes; that involved sexual participation with a dog. Really. Really, really. And, for the record, I’m no shrinking violet. My romantic and so on history is on the not for general release side. I’m not prudish. Not by a long shot. But I am unwavering in my feelings that animals have no business being sexualized in film, print, record or screen.

I was, also, really disappointed in the film’s primary cast members for being okay with it. Being party to it. Now, it colors my good opinion of them. They, no longer, are as entertaining as I once thought they were. Who the heck thinks like this. And who the heck is okay with letting that thinking hit cable TV. I fear this envelope has been pushed into the land of acceptable prat fall and potty humor and oversexed under served in her face screen writers. It’s a miserable thing to have to contemplate. The what’s next for companion animals and human sex. I think, if you agree with me, we need to put a stop to this type of animal abuse now; before it becomes as common as criminals.”
My Ratings: Moral rating: Extremely Offensive / Moviemaking quality: 3

Kiva Reardon, The Globe and Mail
…Been there, done that (better before)… An odd-couple bromance spiked with gross-out humor of a mainly unimaginative sort…

Linda Barnard, The Toronto Star
…there’s not much new here. But a savvy, sassy script, smart casting and genuine “I feel sorry for this white boy” chemistry between Hart and Gad make Wedding Ringer an R-rated bromance that will touch you as often as it tickles you.

Stephen Whitty, The Star-Ledger (New Jersey)
…a lot of crude, offensive humor and foul language, filtered through a Non-Christian pagan worldview that crosses many lines. …the movie includes some jokes about God and Jesus…

Ted Baehr, Movieguide
…more f- and s-word laced crudities and ear-burning blasphemies than a burlesque routine has cymbal crashes. Its characters are many times hateful, selfish and lewd. And nasty visuals…